Discover the wonders of Catholic France on the Vine & Cloister pilgrimage 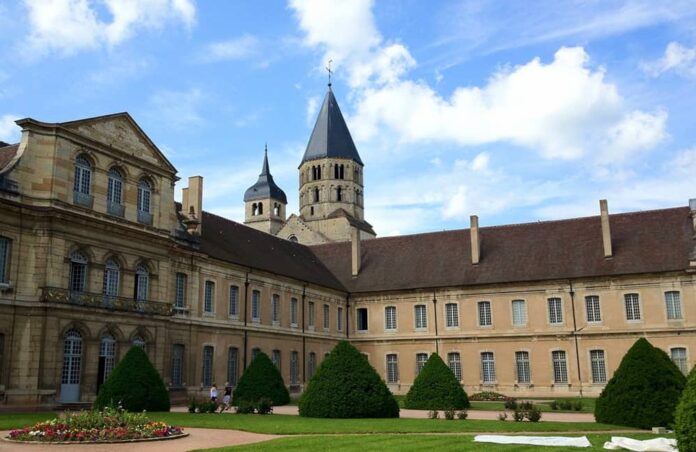 Tucked away in the province of Burgundy, wine, Romanesque architecture, and the monastic life all reached their highpoint in the Middle Ages. In his book, Cluny: In Search of God’s Lost Empire (BlueBridge, 2006), Edwin Mullins describes how the monastery of Cluny, in particular, arose from a hunting lodge donated to it in the year 910 to the largest church in Christendom, soon boasting a network of at least 1,500 dependent monasteries throughout Europe. But, as the title of his book implies, this empire was lost, crumbling under the pressure of stagnation, religious wars, and the French Revolution. Cluny’s enormous church has been mostly destroyed, sold piecemeal for building material, and the nearby Clairvaux, St. Bernard’s great Cistercian abbey, was transformed by revolutionaries into a maximum-security prison.

And, yet, there is still much left to see, bearing witness to the greatness of this lost realm of monks. The most splendid Romanesque churches, the former Clunianc abbey of Vézelay and the cathedral of Autun, continue to reflect the glory of medieval Christendom. Even if St. Bernard’s abbey has been turned to secular use, his foundation at Fontenay continues to point beautifully, though starkly, to the Cistercian vision of prayer, with its pristine condition giving rise to its distinction as a UNESCO heritage site. The labora (work) that accompanied the ora (prayer) of these Cistercian monks can still be found at the Clos du Vougeot vineyard that preserves the monks’ original cellars, representing the largest grand cru vineyard in testimony to great care the monks took to perfect winemaking.

I will be setting off, like Mullins, in search of Cluny and the great legacy of Catholic culture in central and southern France for The Vine & the Cloister pilgrimage that I am leading this September 18-28 (rtijourneys.com/the-vine-and-the-cloister). I’ve been teaching Catholic history and culture for over 10 years and have found that there is nothing that compares to a direct experience of this history and culture. On pilgrimage, we do not simply visit as tourists and take pictures (even if we do snap a few); we enter into the vision and spirit of the communities and events that built these incredible sights. We follow the trail of the saints and join them in prayer, seeking to imitate not only their footsteps on their original soil, but in pointing us to our true homeland.

From Burgundy, that great capital of vines and cloisters, we will move south to Provence, to sip the popes’ wine at Avignon, not far from their remarkable 14th century palace; will honor St. Anne, Our Lady’s mother, at her miracle-working shrine in Apt; and will climb to St. Mary Magdalene’s cave at Saint-Maximin-la-Sainte Baume, where we’ll stay at a medieval monastery turned hotel. From there, we’ll set sail to the ancient monastic island of Lérins, once home to St. Patrick, where the Trappist monks continue to make wine within the Riviera. Continuing back along the coast, we’ll stop at the Roman ruins of Nîmes on the way to Carcassonne, the best-preserved medieval city. Our last stop will be Toulouse, with its beautiful churches, including the oldest of the Dominican Order, the church of the Jacobins, where we’ll venerate the relics of the Angelic Doctor, St. Thomas Aquinas.

Overall, the trip aims to provide an integrated experience of the treasures of Catholic culture that will lead us into spiritual transformation. To offer a taste of the trip, I will be leading two information sessions that will include a wine tasting (of a Chablis, red Burgundy, and a rosé from Provence) along with cheese pairings, accompanied by a talk on the churches, art, and culture that will experience on the trip. The events will be at the Archdiocese of Denver on Feb. 25 at 8 p.m. at Bonfils Hall (1305 S. Monroe St.) and on March 12 at 6:30 p.m. in room 125 of the John Paul II Center (1300 S. Steele St.). Anyone interested in learning more about the Catholic culture of France is welcome to attend. There is no fee to attend the talk, but the cost for the wine and cheese is $10. Please RSVP to jared.staudt@archden.org.

Like the remains of Cluny, the legacy of Catholic culture points to a lost time that can arise again. “What Cluny bequeathed to European civilization,” Mullins contends, “stands before us in the form of some of the greatest church architecture and carving we have, from Vézelay and Autun to Chartres and Canterbury, and that what it achieved in its heyday is well worthy of the description awarded it by Pope Urban II in the 11th century: ‘Cluny shines as another sun over the earth’” (235). We’ll bask in what remains of this sun and bring it with us back to Colorado.

Jared Staudt
R. Jared Staudt, PhD, is a husband and father of six, the Associate Superintendent for Mission and Formation for the Archdiocese of Denver, a Benedictine oblate, prolific writer, and insatiable reader.
RELATED ARTICLES
Around the Archdiocese