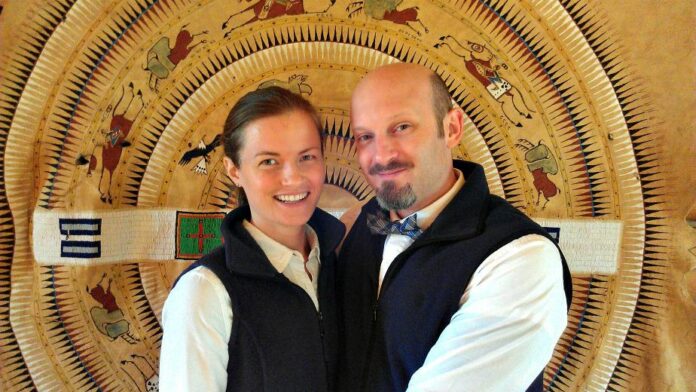 In helping his clients figure out their lives, psychotherapist Kenn Cramer, 36, was figuring out his own.

Cramer, founder of St. Raphael Counseling in Denver, which combines psychotherapy with the truths of the Catholic faith, recently made a major life decision that will satisfy a longing to live a more radical lifestyle for Christ.

In September he will leave his practice and comfortable Highlands Ranch home to do mission work along with his wife, Laura, 32, at Fort Belknap Indian Reservation in Montana.

“When Laura and I got married (three years ago) we played around with the idea to do something extraordinary for Christ,” Cramer said. “We talked about … the evangelical counsels of chastity, poverty and obedience, and what that would look like for a couple.”

Through spiritual direction and much prayer, the couple finally decided the time was right for Cramer to move on from St. Raphael’s, which he opened in 2009. Yearning to go on mission, which both had previously done, they felt a call to serve the most impoverished in the United States. Cramer sent out inquiries to several dioceses.

“For a while, I felt like a hot free agent,” Cramer said with a laugh. “People wanted our help. … It was clear almost from the get-go that we were being led to Montana.”

After visiting Fort Belknap, home to the Gros Ventre and Assiniboine tribes, they decided there wasn’t a good reason not to go.

“They need help and we have gifts to offer,” Cramer said.

The couple will serve as parish life coordinators, a position provided by canon law when there aren’t enough priests for an area, to run three parishes and a chapel formerly staffed by the Jesuit order, which left Fort Belknap last month after 128 years of ministry.

“Laura and I will be fully running four churches on the reservation,” Cramer said, listing everything from administrative duties to offering religious education and organizing weddings, funerals and Communion services.

A newly ordained diocesan priest, Father Garrett Nelson, assigned to a town 40 miles away from what will be the Cramers’ home in Hays, population 800, will celebrate Mass at the churches once a week.

“All of us in the Diocese of Great Falls-Billings look forward to Kenn and Laura joining us,” Bishop Michael Warfel told the Denver Catholic. “I am fully confident with their wealth of experience, formation and many gifts they each bring, combined with a sincere love for Christ and the Church, they will be effective ministers to the people of the Fort Belknap Reservation.”

Located on 652,000 acres of plains and grasslands in north-central Montana, Fort Belknap has nearly 7,000 enrolled tribal members with about half living on or near the reservation. The main industry is agriculture, consisting of cattle ranching and growing alfalfa. Although the rolling terrain and wide sky are beautiful, problems of extreme poverty and high rates of alcoholism and suicide among Native American populations overall are challenges.

“It is quite destitute,” Cramer said. “I feel this call to help bring purpose and mission and hope from Christ to these people.”

As the United States drifts further into secularism, the inherent spiritual spark, wonder and awe of Native Americans are gifts they have to share with the Church, he said.

“They can be some of the best evangelizers of the Gospel because they are born out of destitution,” he said.

Dominican Sister Kathleen Kane, who has served the tribal populations in Montana since 1973, said she is looking forward to the Cramers’ arrival.

“There is a great need on the reservation for a steady, prayerful presence and also for leadership development in the parishes,” she said. “The skills Laura brings with her background in youth ministry will be invaluable. Kenn’s expertise and experience in counseling will certainly be a great help to many who are grieving or looking for direction in their lives.”

Laura, who is leaving her job as an executive assistant, and who previously worked as a nanny, a household manager and served in young adult ministry, will draw on those experiences to help run the parishes. Cramer, whose powerful conversion story includes recovering from substance abuse before becoming a psychotherapist to help heal others, plans to put his abilities to good use as well.

“We’re going into an area with a lot of brokenness,” he said.

Cramer hopes to enter diaconal formation in his new diocese, which upon ordination would allow him to carry out some sacramental duties, including baptisms, weddings and funeral services.

Although leaving the counseling center he founded is bittersweet—Cramer said he’ll miss his clients—he’s confident his partner, clinical psychologist Jim Langley, who is taking over St. Raphael’s, will continue to fulfill the center’s mission.

“I’m leaving it in good hands,” he said.

As for he and his wife, they are excited to learn about the people and culture they’ll be serving and to grow in faith as they help others to do the same.

“In light of the recent Supreme Court decision (permitting same-sex marriage), everyone is questioning how to respond to living in a post-Christian nation,” Cramer said. “This is our attempt to show that marriage can be lived out through the evangelical counsels and to make our marriage a brighter sign of God’s love for the world.”