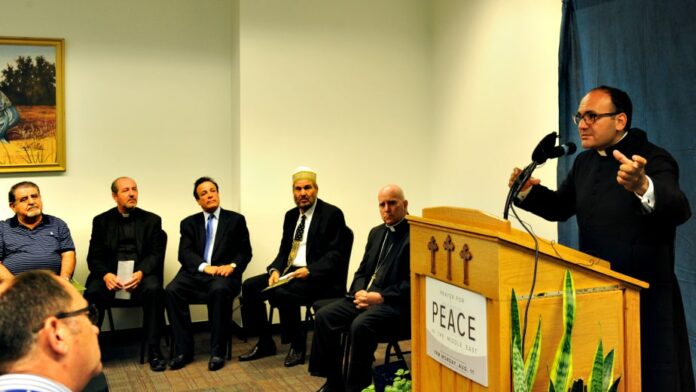 As Middle Eastern religious minorities faced escalating threats and brutal force at the hands of Islamic militants, Denver’s Christian, Muslim and Jewish leaders gathered in solidarity at a press conference this week to declare the violence in Iraq “a grave offense against God and humanity.”

Archbishop Samuel Aquila of Denver stood with representatives of the three Abrahamic religions Aug. 11 to announce their united prayers and call to action against the religious intolerance and slaughtering of innocent Iraqis through the PLACE (Peace, Love and Coexistence) initiative, calling for the defense of human rights and religious liberty.

“We cannot be silent in the face of these attacks on our brothers and sisters in the faith, as well of those of other faiths who have been subjected to the same treatment,” Archbishop Aquila said during the conference at the St. John Paul II Center in south Denver. “All this gravely offends God and humanity. Hatred is not to be carried out in the name of God. War is not to be waged in the name of God.”

The statement also calls on religious leaders to “lead by example and advocate for the safety and the right to exist for all Christian, Jewish and Muslim communities in the Middle East.”

Lakewood parish priest Father Andre Y-Sebastian Mahanna, also director of the Office of Ecumenism and Interfaith Relations in the Eparchy of Our Lady of Lebanon, drafted the document with Archbishop Aquila.

Father Mahanna, a Maronite Catholic, said the leaders are standing to defend a civilization of diversity.

“We join together in condemning and denouncing the preaching of hate against Christians, Jewish and Muslim people and the other minorities who all have equal rights to live together safely in their homelands and nations in the Middle East,” he said to media at the conference.

Together with Shaul Gabbay of the Josef Korbel School of International Studies at the University of Denver, and Sheik Ahmed Nabhan of the Aurora Muslim Society, the archbishop and Father Mahanna said they would sign the PLACE document. Father George Shawareb of St. Elias Antiochian Orthodox Church in Arvada and Deacon Elias Naoum of the Syriac Orthodox Church also spoke at the conference.

Jewish Professor Gabbay called the initiative “a light amid darkness.”

“This is a local initiative which might shed light on this darkness. There is a lot of darkness, but one candle can lighten a large space,” he said during the conference. “We pray for peace, love, human dignity and safety for all minorities.”

Muslim sheik Ahmed Nabhan said they must “work very hard” to cut out evil from the world and preserve peace and mercy.

“This is our responsibility toward the Lord,” he said.

The press conference took place amid a still precarious existence for Christians and religious minority refugees in the Middle East. Some 200,000 abandoned their homes and fled this summer after the radical militant group dubbed the Islamic State in Iraq and Syria (ISIS) forged its way through Iraq threatening conversion to Islam, taxes or death. Uncounted numbers have become casualties.

The world watched as minorities fled to the East from the Christian-hub of Mosul to Erbil where food is scarce and the future uncertain. ISIS’s continuing threat prompted President Obama to authorize airstrikes on the extremists’ artillery and military vehicles to halt the potential slaughter of minorities in Erbil. U.S. planes also dropped food and water in crates last week to refugees near Erbil.

ISIS militants took control of parts of northern and western Iraq in June, including Mosul. They seized Iraqi army weaponry and vehicles and also took control of a third of Syria. Last week, they overran Iraq’s largest Christian town, Qaraqosh, and captured the Mosul Dam, which controls water supply to millions of Iraqis.

The Islamic group also threatened last week that it would not stop until they “raise the flag of Allah in the White House.”

Father Mahanna said, “These threats must not be taken as a joke.”

The interfaith leaders were joined by a dozen more that evening for an unprecedented interreligious prayer service for peace in the Middle East at the Cathedral Basilica of the Immaculate Conception in Denver.

“Our response must be one of prayer and action to help save those in danger,” Archbishop Aquila said. “It is important for us whether we be Jewish, Christian or Muslim that we understand that truth that is common to all of our faiths—our God is a God of love.”