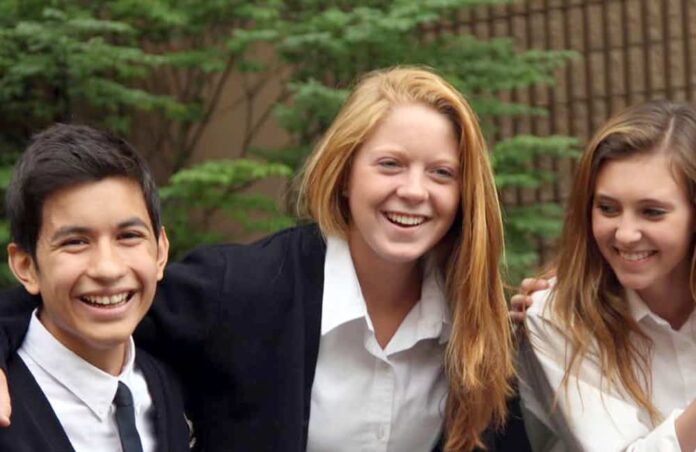 Nearly half a millennium ago, thousands of Catholics heeded Pope Pius V’s call to pray the Rosary requesting Our Lady’s intercession for the deliverance of Europe from Turkish invasion.

In a miraculous triumph, at what came to be known as the “Battle of Lepanto,” the outnumbered Christian “Holy League” overcame the Turkish forces, winning Our Lady of the Rosary a new advocation: Our Lady of Victory.

Today, Denver’s new and first Catholic classical high school has chosen Our Lady of Victory as its patroness, with the mission of developing the whole person and forming students who are holy, well-educated and prepared to engage the present culture and contribute to society.

Our Lady of Victory High School is part of the Chesterton Schools Network, which encourages parent-led Catholic schools across the nation, inspired by the life and work of G.K. Chesterton, who wrote a poem about the victory at Lepanto.

Although the school is not an archdiocesan high school, it has been officially recognized by Archbishop Samuel J. Aquila as a Catholic school. This fall’s inaugural 9th grade class will launch at the St. Louis Parish School building in Denver with nearly 20 students.

“Chesterton’s model of joyful Catholicism draws upon the classical tradition but is very evangelical: It engages the culture with a joyful approach to being Catholic… rather than a reactionary one,” said Dr. R. Jared Staudt, President of the school, Director of Formation at the Archdiocese of Denver and Visiting Associate Professor at the Augustine Institute. “We want to form saints to go out and do great things for the Lord within our culture.” The classical education approach highlights the trivium (logic, grammar and rhetoric) and the quadrivium (arithmetic, geometry, music and astronomy).

“We emphasize Socratic dialogue as well as the trivium: how to read texts carefully and understand them through grammar, how to think about them in a coherent manner through logic, and then how to express yourself well in writing and speech through rhetoric; but also the quadrivium: How do we understand the logical order and beauty of the universe?” Dr. Staudt explained.

The benefits of this type of education are many, he assured.

“It’s not just a practical output, but about forming strong dispositions of thinking, of being able to evaluate things, being able to form a plan of action for your life that will translate into being successful in the future.

“It’s about becoming the person that God wants us to become… We emphasize the fundamental things that shape who we are, so that, secondarily, we are also good at doing things,” Dr. Staudt said.

Part of what makes this goal possible is the communion between faith and reason. Students begin the school day with daily Mass; read Homer, Plato, St. Thomas Aquinas, Dostoevsky, G.K. Chesterton, etc.; and study the Bible and the Catechism. They participate in a curriculum where history, philosophy, literature and theology are “braided together,” as their website states.

Part of what makes it unique is also its approach to the fine arts and to mathematics and science.

“We emphasize the fine arts because we want the students to be engaged with beauty and wonder… We want to humanize them, to make them more fully alive,” Dr. Staudt said.

“I would say we also approach math and science from that perspective. We take math and science very seriously, but not as something dry and textbook based, but something that is engaging the beauty, the logic, the wonder of the universe, and the fact that we can logically understand [it] because it is itself something that is a creative work of a mind, of God’s mind, and his beauty is impressed within it.”

As part of this approach, the school has implemented in its unique formation a lot of time in the outdoors, beginning the year with a three-day backpacking trip with the students and ending with a whitewater rafting trip.
The school also plans on having retreats throughout the year, attending and hosting fine arts events and providing service opportunities for its students.

“I think that’s truly part of what makes us unique, that we want to develop the whole person: body, mind and soul,” Dr. Staudt explained.

“It’s about becoming the person that God wants us to become… We emphasize the fundamental things that shape who we are, so that, secondarily, we are also good at doing things.”

The seed for the foundations of the school began with the desire of a group of Denver Catholic parents for a holistic, classical formation for their children, also motived by the need for a Catholic high school in the South Denver metro area.

Hoping to open a Catholic classical high school for their children in the future, six dads organized a series of monthly talks titled “The First Educators” at St. Mary Parish in Littleton from September to November 2018 as a first step to help in this direction.

Little did they know that their dream would become reality only a few months later, with the help of Dr. Staudt, the Chesterton Schools Network and the support of other parents around the archdiocese.

With six experienced teachers on board, the mission-driven school is set to begin forming students in the classical tradition.

“We want them to be holy. I would say that is our biggest overarching goal, that we want to form saints in the sense that they are thinking people who are well-educated and well prepared to engage the world and make a contribution in society – but [in a way] that holiness integrates everything else that we do,” Dr. Staudt concluded.