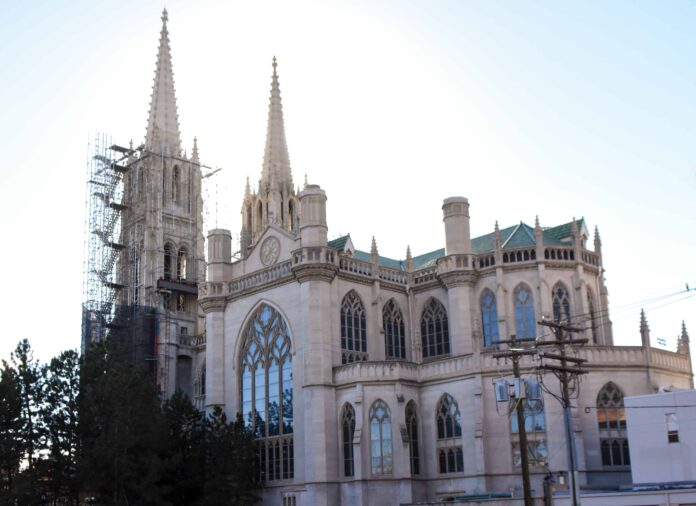 The majestic towers of Denver’s iconic Cathedral Basilica now stand immaculate as they once did over a century ago. After months of cleaning, carving, replacing and repeating, the restoration of the main façade of Cathedral Basilica of the Immaculate Conception is almost complete. But if the prominent building is to see its former glory, it may need just as many helping hands as the numerous beautifully-carved ornaments that embellish it.

What began as an apparent one-month, $100,000 project quickly turned into a 28-month, $4.4 million job as experts took a closer look at the damage in the building. After setting up almost a million dollars’ worth of scaffolding, expenses kept adding up.

With the $2.9 million in the Cathedral savings and restoration fund depleted, the basilica’s operating budget is $200,000 in the hole, and the remaining work to be done is nearly $600,000, plus scaffolding.

“We first wanted to spend the money [we had in the bank] before seeking donors to help us with the cost,” said Father Ron Cattany, Pastor and Rector of the Cathedral. “Now we’re going back to people who love the cathedral and asking them to help us again.”

Some of the added expenses in the renovation process included the surprise revelation that the west tower had been struck by lightning at one point during the last 20 years, meaning that the top of the tower had to be replaced, Father Cattany explained.

Moreover, hail damage on the east- and west-side roofs and the area behind the sanctuary caused leaks that prevented a repainting of the Cathedral after 25 years. An even greater problem emerged when Father Cattany realized that the façade above the roofs had to be fixed first, otherwise a falling stone would void the warranty.

“This is all very consequential … That is why part of the remaining $600,000 of work that needs to be done includes those two façades over the east and west doors,” Father Cattany said.

Vandalism has also forced the rector to hire security guards 24 hours a day, as people have destroyed tools and thrown supplies down from the scaffolding and onto Colfax Avenue.

Even then, Denver’s Cathedral serves all the different populations of the area by keeping its doors open to the public around 90 hours a week.

“The decision I made when I was appointed this position was that I wanted to keep the Church open during the day. What we’ve learned is that after all Masses and confessions, we still have over 140 visitors a day,” Father Cattany said. “People come because it’s a landmark, some come to pray, some come just to take a rest out of the day … And to me that is a great gift to the city.

“When we found out the amount of work that needed to be done, it was a great shock to me,” he continued. “But we’ve had the best people working on it, including Our Blessed Mother, she keeps an eye on it all, and now she’s got a good partner: Julia Greeley.”

The Cathedral needs you!

Denver’s iconic Cathedral Basilica of the Immaculate Conception is looking better than ever, but it is still in need of some vital repairs to the exterior.

Repairs to the North, East and West façades: $2 million

Give today and help preserve a sacred piece of Colorado history!