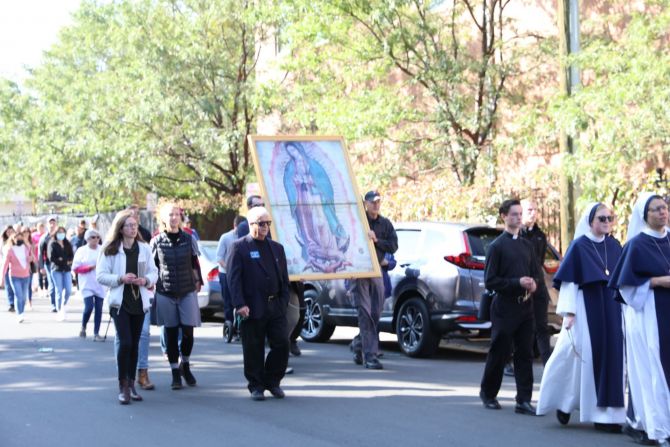 Over 400 Catholics in Denver joined a pro-life Eucharistic procession around the state’s largest abortion clinic on Saturday, Oct. 2.

The event, put on by the Archdiocese of Denver, sought to highlight the 40 Days for Life movement and the efficacy of spiritual remedies for the wounds caused by abortion.

“The testimony I picked up from Hispanic participants was how peaceful and loving is the strength that Jesus brings to us when we process in a place of death,” said Maria Elisa Olivas, community coordinator for the archdiocese’s Respect Life Office.

Catholics from parishes all around the archdiocese participated in the event, as did seminarians from St. John Vianney Theological Seminary, priests, and the Sisters of Life.

“As a participant I was able to experience a gentle peace as we processed in shared prayer and adoration,” remarked Susie Cheshire, a parishioner of St. Vincent de Paul. “It was so nice to be surrounded by all ages — from newborn babies, pregnant mothers, elderly, and all ages in between — as we gathered in prayer, lifting our voices for the voiceless.”

A pro-life clinic, Marisol Health, is located on the same block opposite the abortion compound. Marisol Health operates licensed medical centers fully equipped to help women make decisions about their reproductive health, including giving birth to an unexpected baby. Marisol operates under an agreement with the Archdiocese of Denver.

The procession began in the garden of the pro-life clinic and circled the abortion facility three times before benediction was offered back in the garden.

A giant, framed image of Our Lady of Guadalupe, carried by two men, also made an appearance in the procession.

Lynn Grandon, director of the Respect Life Office at Catholic Charities in in Archdiocese of Denver told CNA that after Holy Mass was celebrated at the Respect Life Office, participants were reminded that a 40 Days for Life campaign in Texas urged people to pray for staff members of a Planned Parenthood clinic, one of whom was Abby Johnson, who would become a powerful witness to the pro-life cause.

Gianna Smith, a sophomore at Our Lady of Victory Catholic Classical School in Denver, told CNA that “it is important for young people to pray at Planned Parenthood.”

“Saturday was amazing because there were so many people, so you have the power of group prayer, and on top of that, the Eucharist circling the building,” she said.

“My mom taught me at a very young age how terrible abortion is, so I want to be a part of the movement of it being illegal and unthinkable,” Gianna explained. “I know God especially listens to young people praying, and with such an important issue as abortion is, I don’t even mind giving up a Saturday.”