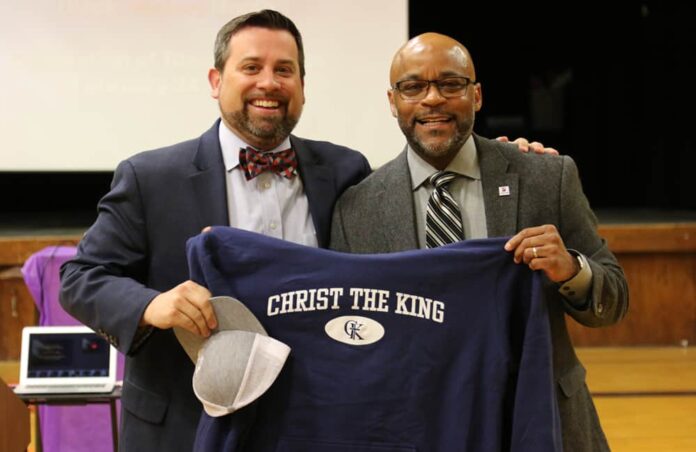 On Monday, February 24, Christ the King Roman Catholic School in Denver held their first Black History Month celebration, and among the special guests was the Denver’s own Mayor Michael Hancock.

The celebration began with the surprise visit of Mayor Hancock, who addressed the students and spoke about the importance of the African American community in our society and remembered those who have made history and impacted our lives.

“I want us all to remember very clearly that this world, our society, has been created by so many people of different colors, races, religions, and we all depend on one another,” Mayor Hancock told the crowd. “Even when we don’t think about it, we’re depending on the inventions and discoveries of people who don’t look like us…Black history Month should also be about celebrating the cultures of history of all people that made this society great.”

After the Mayor’s speech, Kateri Williams, Director of the Office of Black Catholic Ministry at the Archdiocese of Denver shared her testimony about how she was born and raised Catholic and the impact her faith has had throughout her life. “It’s important that we don’t celebrate in just the month of February or Black Catholic History Month in November, but throughout the entire year,” Williams said. “It’s also important to remember, as Pope Francis has shared, that unity and diversity is something we should have a joyful celebration about. It’s not our differences that we should be focused on, but our unity in our Lord Jesus Christ, that brings us all together and we should bring all of those gifts from all of our ethnic communities together as the one universal Catholic Church.”

As part of the Black History Month celebration at Christ The King, the school held several events during the entire week of February 24, including a basketball game to honor the athlete Kobe Bryant and his daughter Gianna, who were killed with seven others in a helicopter accident back in January. Before the fatal crash, Bryant, a Catholic, was seen praying at his local parish.

“The purpose is to bring focus to the contribution that the Catholic Church has [had] with black history,” said Sandra Moss, Teachers and Preschool Assistant at Christ the King Catholic School. “I want students to know Black history is American history. It’s not just about the color of your skin. It’s not about the negativity that is occurring everywhere in the world. I wanted them to see the good side of it… Black history is American history.”