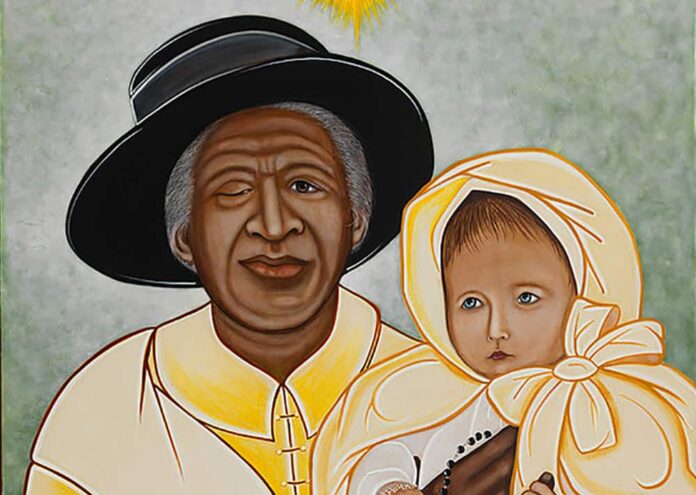 Julia Greeley is the Archdiocese of Denver’s official model of mercy for this jubilee year. Unfortunately, the only existing picture of her is blurry, and most of her face is hidden by a large hat.

“We had a lack of imagery for Julia, but there’s a great devotion to her locally. There was a need to help bring her alive for the people of the diocese,” Chancellor Dave Uebbing said.

Luckily, there’s a long tradition of Christian art allowing an artist to show their subject without full knowledge of what they may have looked like. It’s called iconography.

Icons are more than pictures; they’re meant to be a two-way door of communication that not only shows a person or event, but actually makes it present. Unlike much religious art, they are not merely decorative or immediately understandable. Icons contain their own language of symbolism.

Uebbing commissioned iconographer Vivian Imbruglia to write an icon of Julia. Imbruglia was at first hesitant to call the image an icon, because she didn’t want to give the impression that she was canonizing Julia herself. However, she used the unique language of iconography to communicate Julia’s life to the viewer (see image below for some of those symbols).

“I wrote it like I would a normal icon, with prayer and research, with the same media, but I did not put any gold in the background or a halo, because that would mean I was declaring her a saint,” Imbruglia said.

Uebbing sees the picture as a success.

“What’s important in this image, as opposed to the photo, is that it’s full of symbolism. When I look at this picture of Julia, I just see a person who is warm and loving and pure. She’s not scarred by her experiences in any way. God’s love shines through her,” Uebbing said.

Stories in the icon

Many of the stories surrounding Julia include children. She would take them for rides on the trolley, dance with them in the streets and even laugh with them when they pointed out she accidentally put her skirt on inside out. Uebbing said these stories are part of what makes Julia so saint-like.

“If you look at the lives of the saints, and even Julia herself, loving children is a common trait,” Uebbing said.

Imbruglia painted the child pulling one of Julia’s fingers backward, as children will do. She said she imagined Julia allowing the discomfort.

These help place Julia in Colorado, without having the business of a scene of downtown Denver.”When people outside of Colorado think of Colorado, we think mountains. We think outdoors,” Imbruglia said.

Imbruglia also hid the words “AMDG” in the mountains, as she does in all of her icons. “AMDG” stands for the Latin “Ad maiorem Dei gloriam” and is the motto of the Jesuits.

Julia laid in state at Sacred Heart parish for hours before her funeral.

“She laid in state, which had never happened to a regular lay person, so she was somewhat royalty in her own way. Hence the crest,” Imbruglia said.

The icon is topped with a red ribbon and a chalice holding the Eucharist.

“The red ribbon is the color of mercy. This being the Year of Mercy, and her being the model of it, it just seemed fitting,” Imbruglia said.

The Eucharist indicates Julia’s devotion to it.

“She was so devoted to the Eucharist. In her simple way, it was her breakfast,” Imbruglia said, quoting one of the few phrases Julia is known to have said.

Julia had a well-documented devotion to the Sacred Heart. She would hand out tracts about it at fire stations, and even attended Sacred Heart Parish in Denver.

There is also a small Sacred Heart in the joining bead on the rosary.

Although Imbruglia did not give Julia a halo because she is not a saint, she did allow the Sacred Heart to illuminate her face.

“I did take the liberty, if you look around her head, there is a lighter glow,” Imbruglia said. “If you look at where Julia’s heart would be, you’ll see the same yellow as in the Sacred Heart. I want her burning desire for the Sacred Heart to show.”

However, Imbruglia intentionally painted Julia in a white dress with simple lines.

“They’re not to distract from her face. She’d want us to see the Sacred Heart first, and we see her face second,” Imbruglia said.

Julia was not attractive. One of the accounts of her actually references her having a “Phantom of the Opera face”.

Most noticeably, one of her eyes drooped and leaked, due an injury she received while still a slave. She was disfigured for life.

“She couldn’t see out of the eye. It was always weeping,” Uebbing said.

The chalice and the Sacred Heart both include a gold leaf, and the rosary is made out of platinum. Imbruglia said that this is because she wants to especially honor the representations of Christ in the icon.

“Anytime I can give honor and glory to make Him stand out, I do,” she said.