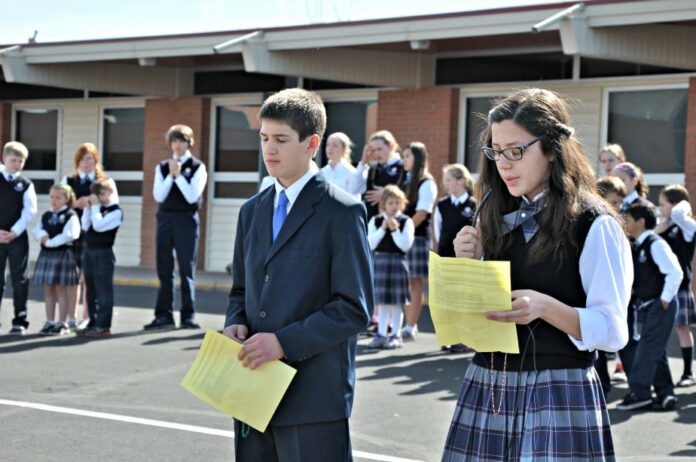 Nearly 500 students at St. Mary School in Littleton gathered outside last week to form their first school-wide spiritual embrace around one another and the campus.

The kindergarten through eighth-grade school students stood in a wide circle near its building on Prince Street May 2 to seek God’s protection and blessings over the community in the face of physical and spiritual danger.

Natalie Hattenbach, mother of two students at the school, organized “prayer around the perimeter” in response to violence. She said she heard about the murder of 10-year-old Jessica Ridgeway in Westminster in October 2012 and the slaughter of 26 students and faculty at Sandy Hook Elementary School in Newtown, Conn., December 2012 and realized no parent, no matter how hard they tried, could protect their children all the time.

“You just feel kind of helpless as parents wanting to protect your kids,” she said. “There are great things we can do practically speaking, but obviously you can’t protect your kids all the time.”

“There are external dangers both spiritual and (physical), and I think there was a desire among the parents, led by Natalie Hattenbach, to act as essentially a guard that walks the perimeter,” said Caudle.

This month, Hattenbach suggested a school-wide prayer circle in order for students to see them pray for each other and feel their support.

Father Juan Espino, school chaplain, said it’s more moving to see the students and parents all gathered together in prayer.

“One of the ideas of prayer around the perimeter is let’s get all the students around the building to get the sense of our prayerful embrace of the school and the mission and vision of the school,” he said after leading the students in prayer. “Visually it’s more impactful to see the whole student body praying for the building, praying for one another. It’s the feel of that embrace.”

He said a blessing over the school after students recited a part of the rosary.

Father Espino asked God to keep the children safe and make the school a place of learning.

“We dedicate this building to the education of youth and learning,” he prayed. “Make it become a center where students and teachers build on the words of truth, strive with their whole heart to stand by Christ and live Christ as their teacher. Grant that students and teachers alike may follow Jesus Christ, the way the truth and the life, forever and ever.”

The prayer circle followed the all-school May Crowning.

Hattenbach said she wants to expand the prayer around the perimeter to include the neighboring church.

“I think the more presence we have, the more it’ll catch on,” she said.