His Church. Our Experience.
Subscribe
HomeLocalObituariesDeacon Paul Grimm, known for his gentle spirit, dies at 87
LocalObituaries

Deacon Paul Grimm, known for his gentle spirit, dies at 87 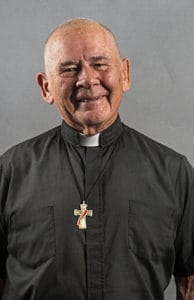 Deacon Paul Grimm, 87 years old, passed away on April 16, 2022.  Deacon Paul was assigned to St Frances Cabrini Parish in Littleton, Colorado. He was also very active in ministering to the sick and disabled in the community.

Paul Richard Grimm was born on March 21, 1935, in Jersey City, New Jersey to Carl and Beatrice Grimm.  He was baptized on the 7th of April 1935 at St. Nicholas Church in Jersey City.  Paul was one of five children; two sisters died at an early age, which had a great impact on his life. He went to parochial school in New Jersey but left high school to join the Marines during the Korean Conflict.  While still in the service, he received his GED in 1958.  After four years of military service, he attended college and, in 1961, received a degree in Chemical Engineering.  Due to Paul’s job as a Chemical Engineer, the family moved around quite a bit.  This included moving to Nevada in 1966, California in 1973 and Colorado in 1977.  Moving to Denver allowed him to study for the diaconate and at St. Thomas Seminary. In 1993 he received a master’s degree, with honors, in Pastoral Ministry at St. Thomas Seminary in Denver.

After leaving the Marine Corps, he went back to New Jersey to visit family and to marry Mary Ann Bates.  They were married on November 2, 1957.  Paul and Mary have four children: Nancy, Kathleen, Christopher, and Peter.  They also are blessed with 9 grandchildren, 9 great-grandchildren, and 2 great-great-grandchildren.

On June 16, 1984, Deacon Paul was ordained a Deacon by Archbishop James Casey at the Cathedral Basilica of the Immaculate Conception in Denver, Colorado.  His first assignment was back to St. Thomas More Parish, his parish of origin.  He would also minister at All Souls Parish and then St. Frances Cabrini Parish, where he retired in 2010.  During this time, he spent more than 20 years in hospital ministry at Ft. Logan Mental Health Center and Littleton Hospital.  These assignments allowed him to practically use his training in Pastoral Ministry and Counseling.

“Deacon Paul was known for his kind and gentle spirit which fit his diaconal responsibilities perfectly.  Just as God wanted it to be,” said Deacon Joseph Donohoe, Director of Deacon Personnel. “His pleasant and prayerful nature is a characteristic that every Deacon should aspire to and treasure.”

A vigil service took place at St. Frances Cabrini Parish at 6:30 PM on Monday, May 9, 2022.  A Funeral Mass for Deacon Paul was celebrated at St. Frances Cabrini with Bishop Jorge Rodriquez as the celebrant on Tuesday, May 10, 2022, at 10:30 AM.  After the Mass, he was laid to rest at Ft. Logan National Cemetery.