His Church. Our Experience.
Subscribe
HomeLocalDeacon Dusty Martin, who beat the odds against cancer diagnosis, dies after...
LocalObituaries 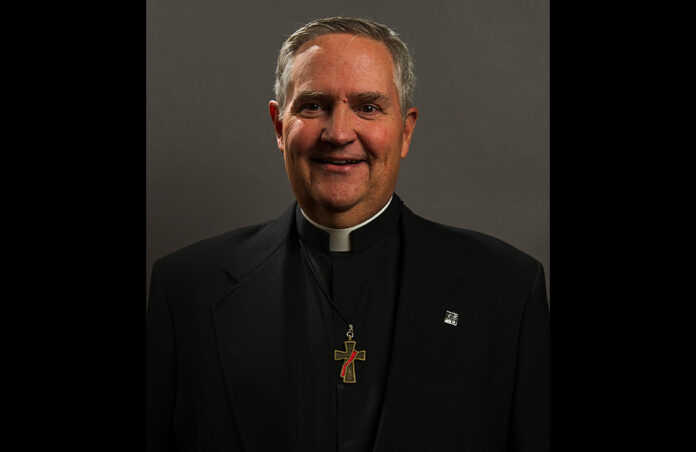 Deacon Dusty Martin, 67 years old, passed away May 10, 2021 at his home after a 9-year battle with cancer. Deacon Martin spent most of his diaconal ministry assigned to St. Pius X Parish in Aurora, Colorado.

Gregory (Dusty) David Martin was born June 17, 1953 Madison, Wisconsin to Hugh (Joe) and Virginia Martin.  Born into an Air Force family, Martin traveled to various areas, including Falls Church, Virginia where he graduated from high school.  Eventually the family moved back to Colorado Springs, Colorado where they decided to settle.  After high school, Martin went to Colorado State University where he studied aviation and business.  Martin’s analytical nature led him to take on the banking industry in various capacities from 1977 until his health impeded his ability to contribute to the organization.

On August 9, 1975, he married Anna (Angie) Marie Atchley at St. Casimir Parish in Leavenworth, Kansas.  They were blessed with a son, Patrick, and a daughter, Eryn.  They also have two granddaughters.  While Martin was born into the Baptist faith, his parents were not very active in church. Seeing the grace of his own family and attending Mass with his wife, Angie, at Immaculate Heart of Mary in Northglenn, Martin decided to join his family in the faith on April 2,1988 and was received into the Catholic Church at Queen of Peace Parish in Aurora in 1988.

On June 11, 1994, at the Cathedral Basilica of the Immaculate Conception, in Denver, Colorado, Deacon Martin was ordained to the order of the Diaconate by Archbishop Francis Stafford. There he was immediately assigned to St. Pius X in Aurora.  Deacon Dusty, as his parishioners knew him, was very passionate about his diaconal ministry.  From riding the bus to visiting veterans at Fitzsimmons, he lived with the people of the Beatitudes.  His bus rides would always involve conversations with someone he hadn’t met.  Indeed, he never met a stranger.  Deacon Martin also ministered to disadvantaged at the Carron Coffee House, the deaf community, and detention center in Aurora.

In 2012, Deacon Martin was diagnosed with cancer and given a short time to live.  Through prayer and thanksgiving, he was able to defy the doctor’s predictions and renewed his passion for spreading the Gospel.  His story was so compelling, that it was recorded in the Denver Catholic Register’s February 27, 2013 edition, “In the face of death, deacon finds grace.”  It was also documented in the video series, onebillionstories.org.

“Deacon Dusty was authentic. Indeed, his entire being was dedicated to the glory of God and amplified during his illness,” stated Deacon Joseph Donohoe, Director of Deacon Personnel, “He prayed through his suffering and made it his passion to be a living as an Icon of Jesus Christ.  You made it dear brother!”

A Funeral Vigil was held for Deacon Dusty on May 19, 2021 at St. Pius X Parish in Aurora.  A Mass of Christian Funeral was held at St. Michael the Archangel. Deacon Dusty was laid to rest at St. Simeon Catholic Cemetery in Aurora.