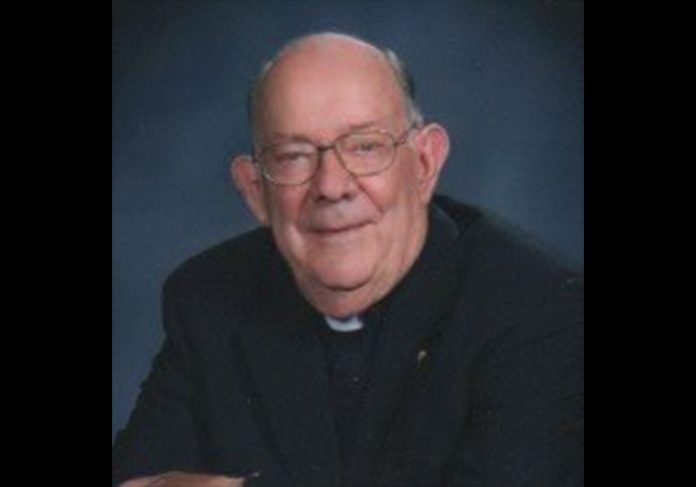 Upon entering the Archdiocese of Denver Diaconate Candidate Formation Program, future Deacon Jason ‘JD’ Dorwart was asked how he would like to have others think of him; his answer proved to be true. He related that he wanted others to think of him as “just a good, caring individual, a good caring man.” This good caring man passed away on Nov. 15 at 93 years of age. He was preceded in death by his wife Mary, in December of 2015.

Deacon Dorwart was born in Lawrence, Neb., on Feb. 15, 1929. When his family moved to North Platte in 1939, he met his future wife Mary and graduated from St. Patrick’s Catholic School in 1947. After attending Creighton University, he enlisted in the U.S. Air Force in 1949. He was later accepted to Officer’s Candidate School and was commissioned a Second Lieutenant in March of 1955. He served 27 years in the aircraft maintenance field and retired as a Lieutenant Colonel (Aircraft Maintenance Squadron Commander) in June of 1975. During his military career, Deacon Dorwart served from Alaska to South Carolina and many points in between as well as in England and Thailand.

After retiring from the Air Force, Deacon Dorwart enrolled at the University of Northern Colorado in Greeley where he’d complete his degree. He and his daughter Ann graduated together in 1979, he with a double major in Special Ed and Elementary Ed, she in nursing. Deacon Dorwart taught 5th, 6th and 7th grade at Greeley Catholic High School until its closing and was also Troop Leader of Greeley’s Boy Scout Troop serving scouts with special needs for many years.

Deacon Dorwart entered the Diaconate Formation Program in 1988 at St. Thomas Seminary and was ordained a Deacon at the Cathedral of the Immaculate Conception on May 25, 1991, by then Archbishop J. Francis (Cardinal) Stafford. He ministered at Our Lady of the Mountains Parish in Estes Park, Colo., until he retired in March 1999. He also faithfully served on the Archdiocesan Diaconate Personnel Board.

In 1988, when Dorwart’s wife, Mary, was asked what additional insights she wanted to share about her husband, she related that JD “was generous with his time, a humble individual, a loving husband and father, and has a beautiful tenor voice.” Deacon Dorwart lived all these attributes and was definitely born a natural Irish Tenor and shared his love for music and singing throughout his life with all who knew him. It was shared that his signature song was “Danny Boy” and that he could bring his audience to tears when they heard his beautiful voice. This same voice was shared through a recorded performance of ‘How Great Thou Art’ at his funeral liturgy.

“He was a wonderful man, humble in service to the Lord and our body of Christ throughout his ministry and life,” said Deacon Ernie Martinez, incoming Director of Deacon Personnel for the Archdiocese of Denver. Deacon Martinez further related that, “He was able to connect with a deep love and compassion for everyone he met and was blessed with a good sense of humor; that coupled with his warm smile, genuine ways and a passion for the word of God.”

A Funeral Vigil was held on Nov. 21 at St. Mary Catholic Church, in Greeley, Colo. The Mass of Christian Burial was held Nov. 22 at St. Mary’s in Greeley. Deacon Dorwart’s interment was held at Sunset Memorial Gardens immediately after the Mass.

In lieu of flowers, memorial contributions may be made in JD’s memory to St. Mary Catholic Church, North Platte Catholic Schools or to the charity of your choice in care of Allnutt Funeral Service 6521 W. 20th St. Greeley, CO 80634.