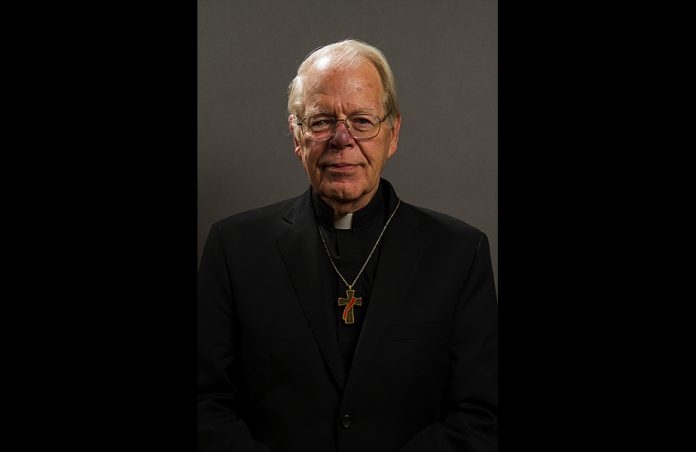 Deacon Bill Stow, 75 years old, passed away Jan. 1 on the Feast of Our Lady Mother of God. Deacon Stow was assigned to St. Michael the Archangel, Ascension parishes and St. Bernadette’s where he ministered to the St. Kateri Community. He had retired in June 2021 and was assisting at St. Michael’s.

William Jay Stow was born on Dec. 10, 1945, to Jay and Marion Stow, in Dickerson, N.D. He was baptized at St. Patrick’s Parish in Dickerson on Jan. 5, 1946. While still young, the Stow Family moved to Rapid City, S.D., attending Catholic School until the eighth grade. The family would move again to Albuquerque, N.M. After high school, Bill attended the University of New Mexico and eventually taught as an adjunct professor. He majored in Economics with two master’s degrees in Finance and Nuclear Engineering.

The Stow’s continued to move across the country. From New Mexico they moved to New York then to Oregon. In Oregon, Bill discovered a Benedictine Abbey where he became an Oblate. In 1992, Bill found work as a Management Consultant in Aurora, Colo., and became very active at St. Michael the Archangel parish.

On June 12, 1999, Deacon Stow was ordained a deacon at the Cathedral of the Immaculate Conception by Archbishop Charles Chaput. He was immediately assigned to St. Michael the Archangel then asked to minister at Ascension Parish. In 2005, Deacon Stow was asked to help with the Kateri Community at St. Bernadette’s parish until he retired in 2021. He was particularly interested in helping those in need and deepening his spiritual relationship with God. He served the homeless, the disadvantaged and the Native American Community. He also had a love for photography, four-wheeling and woodworking.

While on a pilgrimage to El Salvador, Deacon Stow had a profound, almost mystical experience while assisting at Mass where St. Oscar Romero was gunned down during the Holy Sacrifice in 1980. From that experience he became even more intent on helping those who were underprivileged and poor.

“Deacon Bill took his difficulties and illnesses to the Cross,” said Deacon Joseph Donohoe, Director of Deacon Personnel. “His desire to draw close to God was displayed in his passion for working with those of the Beatitudes. He will be greatly missed.”

A Vigil was held for Deacon Bill at St. Michael the Archangel on Jan. 12. On Jan. 13, Archbishop Samuel J. Aquila presided at the Mass for Christian Burial at St. Michael’s. Burial will be at a later date in his family plot in the State of Washington.