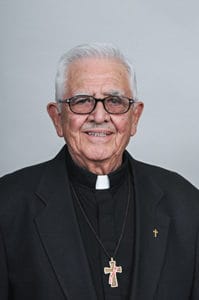 Deacon Alfredo Sanchez, 93 years old, passed away on April 12th, 2022.  Deacon Al was assigned to various parishes in the Denver metro area.  He ministered primarily at Annunciation Parish in Denver and retired from St. Therese Parish in Aurora.

Alfredo Sanchez was born on January 22, 1929, in McGaffey, New Mexico to Manuel and Anita Sanchez. He was subsequently raised by his paternal grandparents and helped with chores around the house.  At the age of 17, Alfredo joined the U.S. Army and was sent to Korea during the Korean Conflict.  He also served in Alaska and Ft. Hood, Texas.  He was honorably discharged from the Army in 1953 as a Master Sergeant, after serving the country for 8 years. Upon leaving the military, he worked as a Civil Service employee in California and New Mexico for 38 years.  He retired from his Civil Service job in 1984.

While still in the Army, he met Marie Barela.  Then, on September 17, 1949, they were married in Belen, New Mexico.  The couple was married for 72 years and are blessed with a daughter, Elizabeth.

On June 7, 1981, Deacon Alfredo was ordained a Deacon by Archbishop Robert Sanchez in the Archdiocese of Santa Fe.  While in the Archdiocese of Santa Fe he was assigned to St. Bernadette Parish, John XXIII Parish and the Church of the Risen Savior.  Then, in 1987, Deacon Alfredo and Marie moved to the Denver, Colorado area.  He was incarnated into the Archdiocese of Denver in August of 1996.  He began attending Light of the World Parish in Littleton and was soon assigned to Annunciation Parish in Denver. He also had assignments at Sacred Heart of Jesus, St. Mark’s, and St. Joseph parishes. He retired from active ministry in 2004.  Although he was retired from his full-time position, he still enjoyed driving a school bus for Jefferson County, Colorado.   Deacon Alfredo was very involved in the Knights of the Columbus and the Elks Lodge. As they were getting older, he and Marie moved to Heather Gardens Retirement Community where he continued to minister to the residents in the Community.

“Deacon Alfredo put his heart and soul into his community. He ministered to the faithful with grace and vigor, regardless of where he was assigned,” said Deacon Joseph Donohoe, Director of Deacon Personnel. “His commitment to God and Country made him an American Hero and a True Deacon Servant of the People.”