David Card and his goals for Regis Jesuit High School 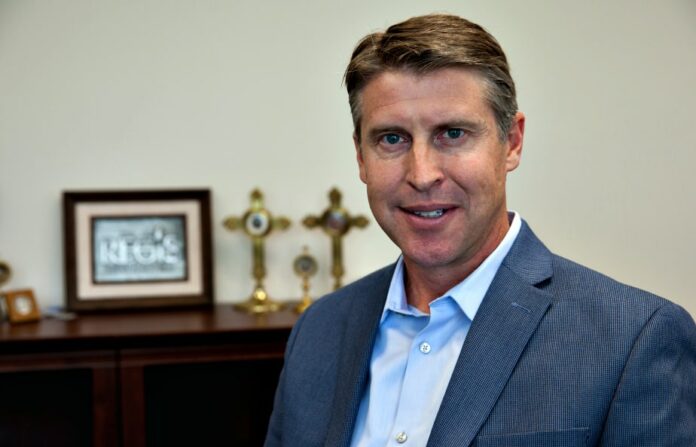 For David Card, sending his children to a Catholic school was an easy decision.

“I think there’s something fundamental and holistic about bringing your faith and your spirituality into your full development process,” he said. “I’ve never considered anything else for my kids.”

In August, Card began to serve as the first lay president of Regis Jesuit High School, and second alumnus in the role (Class of 1987). In his new role, Card says he hopes he can make the possibility of an education at Regis a “real option” for qualified students with little financial resources.

Card replaces Rick Sullivan, who served as interim president of Regis Jesuit since Father Paul Sheridan resigned from the post due to health issues at the beginning of the 2015-2016 school year.

Card worked as Director of Development at the school from 1999 to 2003, and has served on Regis’ board of trustees for the past year.

Denver Catholic sat down with Card, to speak with him about his new role, the school, and his philosophy on Catholic education.

Denver Catholic: What are the emotions that come to mind in coming back to your alma-mater to serve as its President?

David Card:  I’m excited for sure. Through Ignatian spirituality, the spirituality given to us by our founder, St. Ignatius, one of the things that’s really been internalized by me is this idea of indifference. That it’s not really what I want, but “Where is it that I am to be?” I’ve had that feeling about Regis for a long time. So there’s a contentedness with that. Certainly, in reality I know it’s a big job, so I’m excited, and there’s also some anxiousness, but the support I’ve received from the community has been enormous.

Denver Catholic: Would you mind elaborating on the foundational pillars that a student at Regis Jesuit will be formed in upon graduation?

David Card: I think (the pillars) really reflect the kind of inquiry that we want our students to engage in. This is all in the foundational spirituality of our Catholic Church and our Ignatian tradition. One of the things Regis really excels at, and Jesuit education excels at, is it provides wonderful pathways, especially for adolescents, to develop an authentic relationship with God.

Also, through the process of discernment what we’re trying to develop is a listening skill in our students. . . This way, they can listen for the signs and ways in which God is calling them to be and to serve. They have many opportunities to explore their gifts and talents, to be really cognoscente of the larger community and the world they live in. Also, they have the opportunity to have real practice in service so they can animate their lives with that service.

Denver Catholic: What are your future goals for Regis Jesuit?

David Card: We adopted a strategic plan on the board a little over a year ago. Excellence, which pertains to our students, to our faculty, and our facilities is one of the pillars. We really want to focus on the inclusiveness of Regis in terms of its diversity. . .We constantly have work to do in maintaining and developing infrastructure for the school, strengthening our financial resources, and get better at marketing who we are and what we do.

I think in general I want to imagine a school that any family who desires especially a faith-formative, rigorous education and thinks “I want my kid to go there” also feels like that’s a real possibility. I’m not sure that’s true right now. So, I really want to work on that. . . I think the most important thing is to continue what we’re doing here and ensuring that our people are exposed to our Jesuit Catholic tradition and that they’re preparing to bring that forth into the world.”

Denver Catholic: Speaking through your experience, what is necessary to propel Catholic education as we continue into the 21st century?

I think on a practical level, the biggest challenge facing Catholic education is financial accessibility. We wrestle with that here (at Regis) and we’ve got a lot of work to do to ensure that really any student who’s academically qualified, along with the parents of that student, feel like this is a real option for them. We do a lot to support that but certainly, we have to do more. There’s always a constant tension between having a quality faculty and putting the resources in place for that to occur, and then having a tuition rate and a financial aid program that can really be accessible to every family.

Denver Catholic: With so many options that parents have in educating their children, why Catholic education?

David Card: I think there’s something fundamental and holistic about bringing your faith and your spirituality into your full development process. To me it is, I’ve never considered anything else for my kids. So I do think that more and more families are hungering for that. Even if they don’t have a faith tradition, they’re concerned about the lack of boundaries for the development for their child.

We’ve always been strong academically. Kids get an excellent college prep education at Regis but if it were just that, we wouldn’t be all that distinctive. I think it really is engaging kids in service, having them really look at themselves and try to figure out “How is it that I am and is there really an opportunity for me to hear where I’m called to be?”