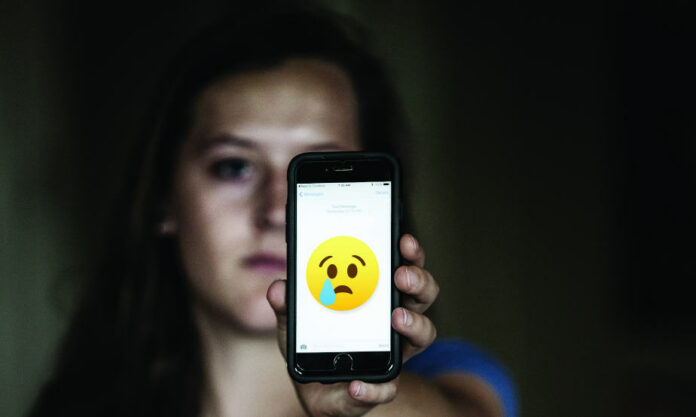 Bullying can take many forms, but in this cyber era, the most prevalent kind of bullying often goes unseen, yet the consequences are anything but.

Of course, the majority of cyber bullying happens on social media platforms such as Facebook, Twitter and Instagram, the use of which has become standard fare for the primary targets of cyber bullying. Add to this the countless stories of cyber bullying victims who have attempted or committed suicide, and suddenly the problem seems much bigger.

“I am afraid that [cyber bullying] is probably the most pervasive form of bullying children deal with today,” said Mary Cohen, Assistant Superintendent of Denver Catholic schools. “It impacts our schools in that it breaks down the Christ-centered community we are attempting to build with our students and their families. Social media allows bullies a much greater audience and the impact of this type of bullying is far reaching. I cannot imagine the pain a child must feel when they have become the target of a social media campaign that belittles them on such a large scale.”

I am afraid that [cyber bullying] is probably the most pervasive form of bullying children deal with today. It impacts our schools in that it breaks down the Christ-centered community we are attempting to build with our students and their families.”

Archdiocesan schools are taking proactive measures in the fight against cyber bullying. Last year, several schools piloted an internet monitoring program called Safe Students Online (SSO) that enables parents to play more active roles in their children’s social media use. Tim Polizzi is the Vice President of SSO, and he said the goal of the program is ultimately to keep kids safe online and promote an open dialogue between kids and parents.

“The challenge right now is kids are [technologically] savvy and parents are at somewhat of a disadvantage and may be intimidated,” Polizzi said. “There’s stuff going on that they would like to know, but they’re not sure how. Our approach is really about giving parents better awareness so that they can be parents.”

Polizzi started Safe Students Online out of a desire to provide a different sort of solution for internet monitoring. He said he noticed that many of the current solutions are either very heavy-handed and monitor every little thing, or they invade the child’s privacy by having full access to their accounts, passwords and all. SSO does neither of these. Parents configure the program via the web and work with their children to install it.

“The challenge right now is kids are [technologically] savvy and parents are at somewhat of a disadvantage and may be intimidated[…]It’s more than just a hobby for kids; it’s how they live their life. [Parents] need to be involved.”

“It’s definitely not something you do behind your kid’s back or some way spy on them,” Polizzi said. “Part of the reason we think the kid can buy into it is because unlike a lot of other programs out there, it’s not showing the parent 100 percent of what happens online.”

SSO currently is able to monitor the most popular social media platforms, including Facebook, Twitter, Instagram and Google+. Parents send an authorization request to their child’s social media account, and the child gives the app permission to monitor it. Parents never receive their child’s passwords. Instead, using a filtering system, SSO monitors keywords, language and topics, and alerts parents via email if it detects problematic or questionable behavior.

Polizzi said that privacy is an important component of the program and clarified that even though the program is paid for and distributed by the school, school administrators never actually receive any alerts.

“The school does not come between the parent and the child, and that’s a very important distinction. [This] is the parent’s responsibility,” he said. “Schools want to get on board now and be proactive. As with a lot of things, parents look to the school for guidance, and if you can provide a tool that makes this difficult part of parenting a little easier, I think it’s worth it.”

“I think it is important for…Catholic educators to partner with our students’ families to help kids realize that with the privilege of technology use also comes great responsibility.”

Christ the King School in Denver is one of the schools that participated in the pilot program for SSO last year. Detty Hensen, principal of Christ the King, saw employing the services of SSO as a smart proactive move. Hansen offered the program to the parents of the school’s 5th through 8th graders, and saw a participation of around 45 percent. She said she wants to move forward and implement it more fully for the next school year.

“With all the negative influences our children are exposed to regarding the use of internet technology and social media, I jumped at the chance to pilot this program,” Hensen said. “I think it is important for…Catholic educators to partner with our students’ families to help kids realize that with the privilege of technology use also comes great responsibility.”

Polizzi is hopeful that more schools and parents will jump on board with SSO to address this pressing issue. By having a social media account of any kind, kids put themselves at risk for cyber bullying without even realizing it, and Polizzi said it is essential for parents to be curious about what their child is doing.

“I’m trying to make this technology thing not so intimidating that parents can’t be parents and kids can’t be kids,” he said. “It’s more than just a hobby for kids; it’s how they live their life. You need to be involved.”

Tips for safe social media use