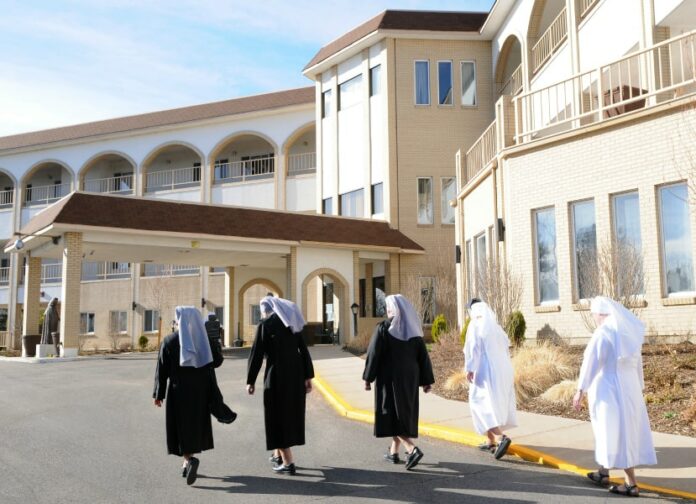 The Little Sisters of the Poor are waiting, and praying.

“I’m not sure what we’re going to do next,” said Mother Patricia Mary Metzgar, L.S.P., who oversees the Little Sisters’ Mullen Home for the Aged in Denver.

In a decision July 14, the 10th U.S. Circuit Court of Appeals rejected the sisters’ claim that complying with the federal Health and Human Services (HHS) mandate would be a violation of their conscience. The court said it “ultimately rejects the merits of this claim” because the court believes the exemption “relieves [the Little Sisters] from complicity.”

The sisters face the decision of either violating their religious beliefs or paying steep IRS penalties estimated around $6,700 a day or $2.5 million a year.

After the news of the ruling, the Little Sisters were disappointed, Mother Metzgar said.

“We have been praying, and we’re going to continue to pray,” she said. “We’re disappointed, but we’re praying.”

The future seems uncertain for the order of sisters that has cared for the elderly poor across the world for more than 175 years. Denver is home to one of the order’s 28 nursing homes in the United States. Mother Metzgar said she and nine sisters work with a large staff to care for more than 60 elderly at their Denver home.

The sisters argued the government is forcing them to act against their religious beliefs because of its requirement to provide free contraceptives including sterilizations and abortion-inducing drugs and devices. Churches are exempt from the mandate, but charitable organizations like the Little Sisters are not.

Attorneys from the Becket Fund for Religious Freedom presented the sisters’ case in a lawsuit challenging the HHS mandate, a part of the Affordable Care Act also known as Obamacare.

Mark Rienzi, lead attorney for the Little Sisters, reacted to the July 14 ruling.

“After losing repeatedly at the Supreme Court, the government continues its unrelenting pursuit of the Little Sisters of the Poor,” he said in a statement. “It is a national embarrassment that the world’s most powerful government insists that, instead of providing contraceptives through its own existing exchanges and programs, it must crush the Little Sisters’ faith and force them to participate. Untold millions of people have managed to get contraceptives without involving nuns, and there is no reason the government cannot run its programs without hijacking the Little Sisters and their health plan.”

The Becket Fund said the ruling is a departure from the U.S. Supreme Court’s temporary protection of the Little Sisters in December 2013 when they were granted an injunction to shield them from hefty fines.

The federal court heard the nun’s oral arguments in December 2014, when Sister Loraine Marie Maguire, Mother Provincial of the Little Sisters of the Poor, stated, “As Little Sisters of the Poor, we simply cannot choose between our care for the elderly poor and our faith. And we should not have to make that choice, because it violates our nation’s commitment to ensuring that people from diverse faiths can freely follow God’s calling in their lives.”

At issue is a waiver form the sisters could sign to receive an exemption from the mandate, but the appeal states that it “would make them morally complicit in sin, would contradict their public witness to the value of life, and would immorally run the risk of misleading others.” The form in fact would authorize a third-party to provide the services they find morally objectionable.

The Little Sisters and their attorneys are reviewing the court’s decision and will decide whether to bring their case to the U.S. Supreme Court, according to the Becket Fund.

“We will keep on fighting for the Little Sisters, even if that means having to go all the way to the Supreme Court,” Daniel Blomberg, attorney at the Becket Fund, said in a statement.

“All we ask is to be able to continue our religious vocation free from government intrusion,” Sister Maguire said.

For more information about the Becket Fund and the Little Sisters case, visit www.becketfund.org/hhsinformationcentral.