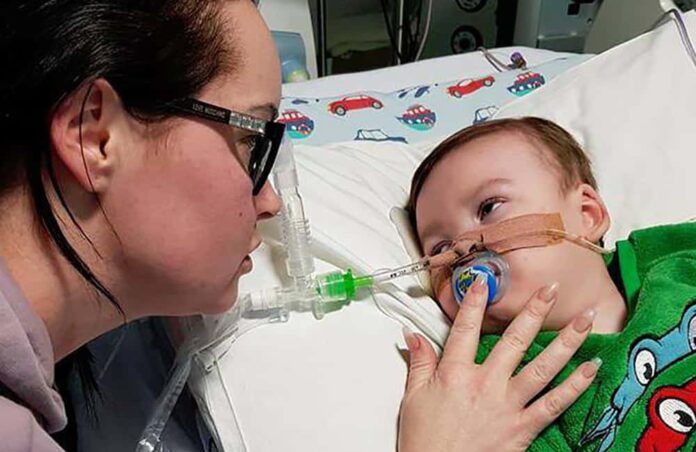 Liverpool, England, Apr 25, 2018 / 12:49 pm (CNA/EWTN News).- An appeal by the parents of ailing toddler Alfie Evans was dismissed by the UK Court of Appeal Wednesday, leaving the child to remain at Alder Hey Children’s Hospital in England.

Tom Evans and Kate James had been appealing to take their son, Alfie, to Italy for treatment, after the child survived the removal of life support, against their will, at Alder Hey Hospital.

“It’s disgusting how he’s being treated. Not even an animal would be treated this way,” Evans said earlier in the day, adding that Alfie is “fighting.”

Alfie is a 23-month-old toddler who is in what physicians have described as a “semi-vegetative state” due to a mysterious degenerative neurological condition that doctors at Alder Hey Children’s Hospital in London have not been able to properly diagnose. He has been hospitalized since December of 2016.

Against the wishes of his parents, Alfie’s life support machine was removed on Monday, and hydration was withheld from him. Although he was expected to die within minutes, he began breathing on his own, and several hours later, doctors re-administered oxygen and hydration. The hospital also withheld food for nearly 24 hours before allowing the toddler to again receive it, Alfie’s father said.

In a hearing on Tuesday, Judge Anthony Hayden of the High Court again denied Alfie the right to travel elsewhere to seek continued treatment, saying his ruling would be the “final chapter in the case of this extraordinary little boy.”

That ruling was upheld when the Court of Appeal dismissed appeals from Alfie’s parents late Wednesday.

Alife’s case first attracted international attention in March, when London’s Court of Appeal upheld a lower court’s decision to end life support for Alfie. Judge Hayden of the High Court had ruled that “continued ventilator support is no longer in Alfie’s interests.”

Alfie’s parents had repeatedly made requests to transfer him to the Vatican-linked Bambino Gesu Pediatric Hospital in Rome, for further diagnosis and treatment. Tom Evans traveled to Rome to meet with Pope Francis in person April 18, where he plead for asylum for his family in Italy, so that his son could be moved.

Earlier this week Alfie was granted Italian citizenship in hopes that he would be allowed immediate transfer to Rome to be treated at Bambino Gesu Hospital.

However, the UK judge ruled that the transfer would not be in Alfie’s best interest, and he would not be allowed to travel to Rome or Munich, where another hospital had offered to treat him. An air ambulance had been ready and waiting to transport Alfie to Italy if the transfer was approved.

Pope Francis had offered prayers for Alfie and his family several times, including at a general audience and in several Twitter posts.

“Moved by the prayers and immense solidarity shown little Alfie Evans, I renew my appeal that the suffering of his parents may be heard and that their desire to seek new forms of treatment may be granted,” he said on Twitter Monday.