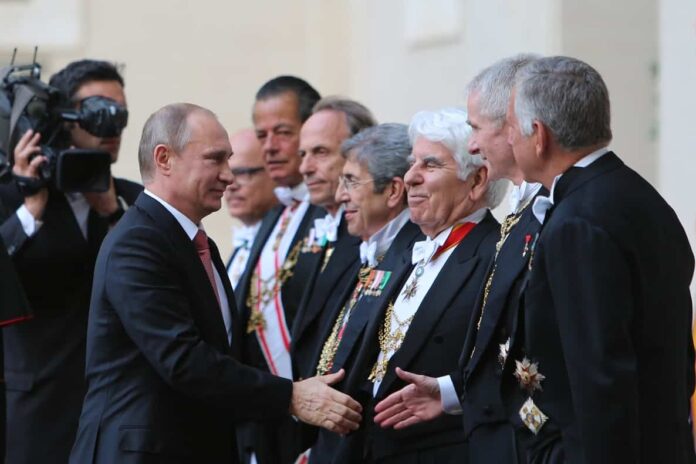 Putin’s Russia is an authoritarian kleptocracy with a post-modern difference, for the veteran KGB man is far more clever and deft than the reptilian characters who preceded him (think Leonid Brezhnev, Yuri Andropov, and Konstantin Chernenko). Yes, he wants to reverse history’s verdict in 1989 (when the Soviet external empire liberated itself) and 1991 (when the USSR disintegrated). But he knows he can’t compete with the West as the old Bolsheviks tried to do when they promoted communism as a humane alternative to liberal democracy. And he knows that, in the digital age, information – including fake “information” – is power.

So while the Putin regime is not averse to brutality when it can get away with it (e.g., murdering domestic political opponents like Alexander Litvinenko, Anna Politkovskaya, and Boris Nemtsov), its international tactics in this new, cooler Cold War are more discreet. Those tactics include polluting the global information space with disinformation through overt instruments like the television network, Russia Today, a wholly-owned subsidiary of Kremlin propagandists. But the even more insidious (and far larger) Russian attack on the global information eco-system comes through various cyber-warfare tools. Thus the Putin regime deploys an army of internet trolls who, supplemented by bots, generate a vast amount of traffic on Facebook and Twitter, spreading lies and propaganda across the globe.

Very few people in the West grasp the reality, much less the magnitude, of this threat to what might be called “cognitive security:” the capacity of Western populations to see things as they are, including things going on in our own societies. In today’s social media world, virality and frequency – how much does your stuff get around and how often is it repeated – can easily get confused with veracity (i.e., truth), especially among millennials whose information-space is social media.

In this campaign, Putin & Co. have adapted a method they’ve long used for domestic political control – polluting the information environment – for an international audience. It’s not the same old same old, however, for the Russian strategic approach has changed. In the 1930s and 1940s, Soviet propaganda promoted the glories of the Russian Revolution and the emerging workers’ state – and did so with considerable success because of the gullibility (and worse) of Western intellectuals and journalists. Today’s Russian propaganda isn’t aimed at promoting Russia, though; its purpose is to undermine and demoralize us, destabilizing Western societies by throwing election results into question, creating suspicions about Western intelligence services, and generally mucking things up.

Further, Putin & Co. have abandoned ideological chastity, being rather wanton about the political company they keep. They’ve supported far-right groups in Europe (including France’s Marine Le Pen) as well as more traditional far-left allies. The ideas promoted by the political parties and movements the Russians support are entirely secondary to Russian calculations about how much disruption within and among Western states those parties and movements can cause.

Putin’s cynical pose as a defender of traditional Christian values and persecuted Christians in the Middle East is part and parcel of this new, cooler Cold War attack on the cognitive security of the West– and too many Christian conservatives have swallowed that noxious bait. Then there is the current Vatican Ostpolitik: Russian Orthodox Church leaders have been prominent actors in Putin’s war of propaganda and disinformation, yet the ecumenical efforts of the Holy See seem premised on the wish that these churchmen are not what they manifestly are – agents of Russian state power.

The exhaustion of Western political culture and the devolution of ground-level politics in the North Atlantic world into a shouting match between the forces of political correctness and the forces of a new “populism” make us singularly vulnerable to this cooler Cold War. That this vulnerability has emerged a mere twenty-five years after the communist crack-up is something else to ponder in this summer of our discontent.