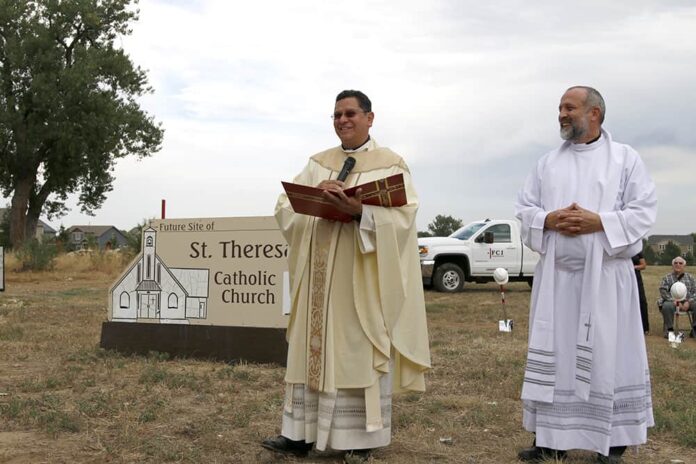 Carmine DeSantis was six years old when St. Theresa’s Parish in Frederick was being constructed.

Having just immigrated from Italy with his family, he didn’t speak a lick of English. This was in 1936, just after World War II had broken out in Europe. He’s been in Frederick ever since, and St. Theresa’s has been an instrumental part of his life.

Founded in 1923, construction for the church was completed in 1938, and still stands today. However, with an ever-growing population and as the main parish for residents of Frederick, Firestone, Dacono and the surrounding areas, they’ve long needed a bigger church.

This dream became a reality Sept. 6, when after nearly 10 years, the St. Theresa’s Parish community broke ground for a new church building. The nine-and-a-half-acre plot of land at the corner of Bobcat and Bella Rosa Parkway in Frederick was donated by a local resident of the area in 2009.

“We have been waiting for this moment,” Father Hernan Florez, pastor of St. Theresa’s for 11 years, told the Denver Catholic.

With a modest population of about 13,000, Frederick is not a big town. However, it is a community that has been around for many years, and St. Theresa’s has deep roots in it. The original building was built by the coal miners who populated the Frederick area in the 1930s, made up mostly of Italian immigrants.

“They’ve done a good job at building the building,” DeSantis said. “Of course, each person did what they could do. There was no specified electrician or anything, but if you could do a little bit of electrical work, you did the job. We had a lot of good hustlers.”

Today, DeSantis remains one of the original founding members of the parish, along with two others.

“They call us the ‘Three Musketeers,’” DeSantis joked.

After serving in the army during the Korean War, DeSantis became a teacher at a local school near the church. He taught there for 32 years, where, among several roles, he served as a hall monitor and taught driver’s ed. He looks back on those years fondly.

“It was wonderful,” he said. “It was just like a big family. We got lucky.”

Blanca Rodriguez has been a part of the parish for 40 years, and she taught alongside DeSantis in the local school for part of that time. She is also an integral part of the Hispanic ministry efforts of the parish. As with many parts of Colorado, the Hispanic population in Frederick has steadily grown over the past 15 years, and today, over half of St. Theresa’s parishioners are Hispanic.

However, the parish has very active ministry groups for both the English and Spanish speakers. In addition to offering six Masses each weekend, there are Bible studies, two Neocatechumenal Way communities, a Charismatic ministry, the Knights of Columbus and Trinity Ladies Auxiliary group, and others.

“There are always people here meeting during the week,” Father Florez said.

In May, a fire broke out inside the church that damaged much of the interior and has rendered the building unsafe for celebrating Masses. The community has been meeting in the parish hall and the nearby gym at Thunder Valley School for Masses.

But that hasn’t slowed them down. St. Theresa’s is a parish marked by its diversity and activity. Even Father Tomislav Tomic, parochial vicar, who originally hails from Bosnia, has been welcomed warmly by the people of St. Theresa’s, which is his first assignment as a priest.

“The parish is great in the sense of accepting me,” Father Tomic said.

The original St. Theresa’s was sold to a funeral home based in Boulder. Soon, the people of St. Theresa’s will have a new church building to call home – a day that Father Florez, DeSantis and the rest of the community has been awaiting eagerly.