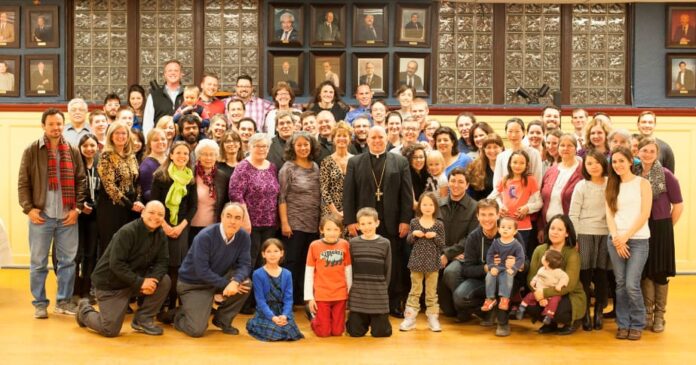 An estimated 80,000 gathered March 7 in St. Peter’s Square with Pope Francis, who told movement members that “the way of the Church is that of going abroad in order to seek out those who are far off, in the peripheries, to serve Jesus in every person who is marginalized, abandoned, without faith, disappointed with the Church, a prisoner of his or her own selfishness.”

The night before in Denver, Archbishop Samuel J. Aquila celebrated Mass at the Cathedral Basilica of the Immaculate Conception with some 70 local members of Communion and Liberation.

Jonathan Ghaly, a member of Communion and Liberation and real estate agent, wrote in an email to Denver Catholic that the presence of the archbishop with the movement was “a great sign of affection to us.”

“In his homily,” Ghaly continued, “Archbishop Aquila referred many times back to the core of Fr. Giussani’s own life and experience: that only in communion with Christ and his followers is authentic liberation found.”

The Mass was followed by a dinner reception which included three testimonials from members, and some songs.

Communion and Liberation states on its website that it is “a movement in the Church which has the purpose of forming its members in Christianity in order to make them coworkers in the Church’s mission in all areas of society.”

The movement began in 1954 when Father Luigi Giussani began a group in Italy called Student Youth. The name Communion and Liberation first appeared in 1969.

“This name brings together the conviction that the Christian event, lived in communion, is the foundation of man’s authentic liberation,” the movement states.

Communion and Liberation is present today in some 80 countries, and is led by Father Julián Carrón. Locally, the movement is led by Father Michael Carvill, who is pastor of Nativity of Our Lord Parish in Broomfield.