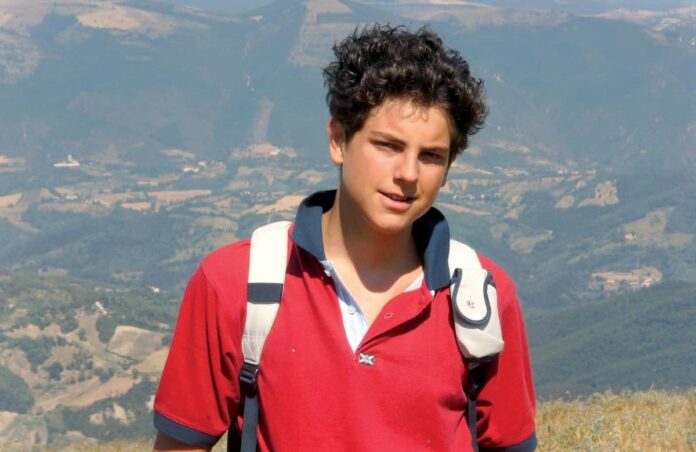 On Saturday, Oct. 10 in Assisi, Carlo Acutis was beatified. On Oct. 12, the Church celebrated his feast for the first time, on the 14th anniversary of Blessed Carlo’s 2006 death of acute leukemia.

The time between Carlo’s birth into eternal life and his being raised to the altars was almost as brief as his 15 years of life on earth. In that short span, however, Carlo not only experienced the “life to the full” (Jn 10:10) that Christ came into the world to bring, but became a teacher to his parents, peers, the poor and now the whole Church.

He may already be the most famous 15-year-old to die. While the beatifications of Padre Pio, Mother Teresa, John Paul II and John Henry Newman were bigger than the pandemic-reduced crowds in Assisi, none had 15 days of preparation and veneration, or a vigil of prayer the night before, like he did. The others were all quite famous during their life, while few outside of Milan and Assisi would have known Carlo.

But now, just 29 years after his birth, Blessed Carlo is perhaps touching far more people than any of those great saints did when they were 29. And he’s just getting started. Pope Francis penned three paragraphs about him in his 2019 exhortation to young people Christus Vivit and now thousands of articles and hundreds of websites tell his story.

When I first learned about him, I was impressed by his precocious hunger for God: He prayed the Rosary every day from a young age; made his first Holy Communion a year early and then attended daily Mass thereafter; cared for the homeless each night; traveled regularly to Assisi; loved the saints; learned computers to design websites to spread his love of the Eucharist and Mary and to teach about angels and the four last things. I figured, frankly, that he must have come from a home similar to the one that produced, for example, St. Thérèse.

Instead he came from a home that, as his garrulous mother Antonia has humbly said in various interviews, wasn’t even lukewarm. By the time Carlo was born, Antonia had been to Church only three times in her life, the days she was baptized, confirmed and married. Carlo, through his questions and zeal, eventually got her to take her faith more seriously, and she was just one of many converts. While Carlo’s grandparents practiced the faith and he attended Catholic schools, it seems pretty clear that the Lord interacted with Blessed Carlo much like he did with the young prophet Samuel.

Several things strike me about his life.

He had an advanced awareness of the meaning of life and how to live well. “To be always united to Jesus is my program of life,” he declared. In contrast to contemporary narcissism, he said that happiness comes from keeping “one’s face turned toward God” and sadness from focusing your attention on yourself. “Not I, but God” was his mantra. “Find God,” he stated, “and you will find the meaning of your life.”

He lived life with a certain urgency: “Every minute that passes,” he said, “is one minute less to become like God,” and to become like God was his desire. “What does it matter if you can win a thousand battles if you cannot win against your own corrupt passions?” he asked. “The real battle is with ourselves.”

Right before he died, he said, “To have a long life doesn’t mean that this is a good thing [because] one can live a very long time and live badly.” He humbly confessed, “I am happy to die because I have lived my life without waiting a minute on those things that do not please God.”

Blessed Carlo had an ardent love for Jesus in the Eucharist. He lived a Eucharistic life, calling the Eucharist “my highway to heaven.” He attended daily Mass from the time he was 7 and spent time each day in adoration. “The more Eucharist we receive,” he believed, “the more we will become like Jesus.”

He had a Eucharistic amazement, so fascinated by the Eucharistic miracles across the centuries that he went on an adventure to try to visit them all and to document them so that others could share his astonishment. It didn’t make sense to him that there would be huge crowds for soccer games and rock concerts but no lines before the tabernacle where God is present and lives among us.

He had a deep love for Mary. “The Virgin Mary is the only woman in my life,” he said, and he called the Rosary, which he prayed daily, the “shortest ladder to climb to heaven” and the “most powerful weapon,” after the Eucharist, “to fight the devil.” Like his inspiring 196-part series on Eucharistic miracles that has posthumously traveled the world, he also had conceptualized a 156-part series on the Marian apparitions, which was completed by his mother after his death.

He had a love for the Church and the saints. “To criticize the Church means to criticize ourselves,” he said, because “the Church is the dispenser of treasures for our salvation.” We judge the Church not by those who don’t live according to her teachings but by those who do, which is why he drew near to the saints, like St. Francis of Assisi and various great young saints like Tarcisius, Aloysius, Dominic Savio, Bernadette, and Francisco and Jacinta Marto.

He had a vibrant charity. He stuck up for classmates being bullied, invited to his home kids who were suffering because of their parents’ divorce or domestic problems, tutored classmates who were struggling with homework or computer problems, patiently rescued friends experimenting with drugs or addicted to pornography, spent time with the elderly helping them with tasks, “hunted” for litter in parks or on the beach to beautify the world, brought warm drinks and food to the homeless and used his allowance to buy them sleeping bags or warm clothes. “Life is a gift,” he said, “because as long as we are on earth, we can increase our level of love.”

His greatest charity was to try to share the faith. From the time he was 11, he taught catechism and sought to inspire younger kids to choose to strive for sanctity. To make the faith practical, he made a “Holiness Kit” for them that involved nine steps that he himself practiced: to love God with all your heart; each day to try to go to Mass and receive Communion, pray the Rosary, read a passage of sacred Scripture, and make a visit to Jesus in the tabernacle each day; to go to confession once a week; to help others as often as you can; and to rely on your guardian angel as your best friend.

He attracted people to the faith more by his example and friendship than by words. His mom said, “To live close to someone like Carlo means not to remain neutral in your faith.” His zeal led him use his computer skills to try to design websites not only on the Eucharist and on Marian apparitions but also a 170-part series on the Last Things and a 131-part series on Angels and Demons in the lives of saints.

Despite all of this, there’s a danger in the devotion to him now growing very fast. It’s that, like Blessed Pier Giorgio Frassati, he might suffer from well-meaning but superficial caricature. Some reduce Frassati from a man of the beatitudes and heroic charity to a “holy hunk” who hiked and smoked a pipe. Similarly, some are basically promoting Blessed Carlo as a PlayStation-competing, comic-book-loving, jeans-and-sneaker-wearing computer whiz. In trying to make holiness “cool,” they’re instead making it mundane by focusing on accidents rather than substance.

Like his beloved St. Francis, however, Blessed Carlo was an “influencer for God” not by his worldliness but by his ordinary otherworldly radicalness. His most famous quip was, “All people are born as originals, but many die as photocopies,” and some are unfortunately trying to make him two-dimensional, evidently believing that the depth of his originality in God’s image would repel rather than attract the young even more.

The world and the Church, however, are in need the real thing.