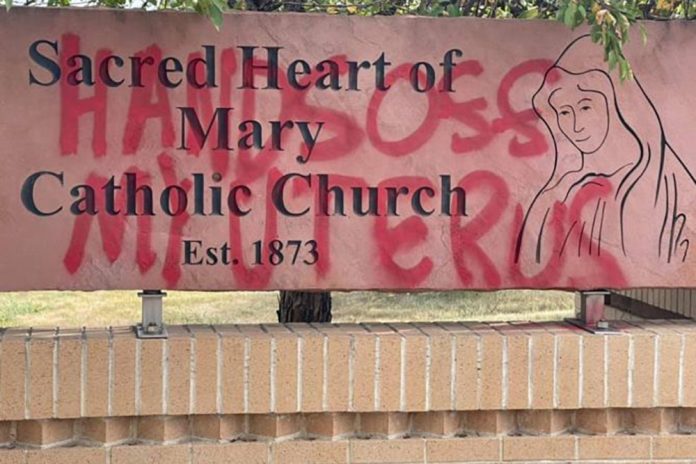 A Catholic parish in Boulder, Colorado, with a memorial to aborted babies on its front lawn was desecrated with pro-abortion graffiti in the early hours of Sept. 29.

Sacred Heart of Mary Parish was tagged with numerous spray-painted slogans including “Jesus [Loves] Abortion,” “Bans off our bodies,” “No Wire Hangers Ever,” and a symbol combining an “A” signifying “anarchy” and the traditional symbol for “female.”

Mark Evevard, Youth Director and Social Communications Director for the parish, told CNA that the police believe it was a group of unidentified assailants who hit the church, and that police are currently investigating.

The parish had a display of 4,000 small white crosses in its front lawn, each one representing a baby aborted each day in the United States. The vandals trampled and desecrated at least half of the crosses.

They also painted over signs facing the roadway advertising the memorial, and covered the lenses of the lights that shine on the church building with red paint.

“My Body My Choice” was scrawled in bright red spray paint on a white pickup truck outside the church, and at least one of the truck’s tires appears to have been deflated.

The vandals also used a rock or hammer to attempt to break the church’s stained glass windows, but only managed to break the safety glass on the outside. They also threw eggs at several doors.

Although the church had a functioning security camera system, the images captured of the assailants are little more than “shadows,” Evevard said, and have not proven helpful. The assailants purposely avoided being captured on video in an identifiable way, he said.

Evevard said the pastor, Fr. Jonathan Dellinger, has been encouraging parishioners to “put those folks at the top of your prayer list, and pray for their conversion.” Evevard said several passersby, including a few people not affiliated with the parish, have stopped to express condolences and help to clean up some of the mess.