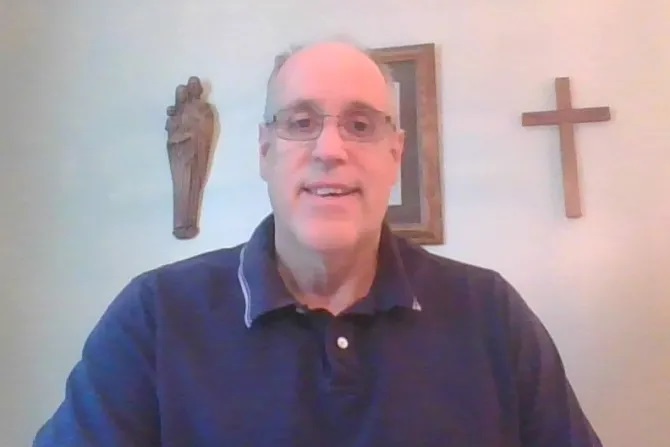 Since last summer, a Colorado man has been helping Catholic schoolchildren in Uganda using the two “universal” things that they share: Catholicism and mathematics.

Brad Jolly is a relatively new Catholic, having converted to the faith at age 50. He’s a parishioner and active Knight of Columbus at St. John the Baptist in Longmont, Colorado, less than an hour northwest of Denver.

During summer 2021, Jolly tuned into a six-week online course, taught by Daniel Campbell, director of Denver’s St. John Vianney Seminary Lay Division. The topic of the course was St. Joseph.

The online course was billed as an intensive, in-depth study of Christ’s foster father, based primarily on Scripture, working through the basic chronology of St. Joseph’s life and explaining the theological significance of events involving him. The impetus for the course, which attracted nearly 700 participants, was the Year of St. Joseph, which Pope Francis declared for the Church at the end of 2020.

It wasn’t just fellow Coloradans taking the course, however. Also joining, from ten time zones away, were nearly a dozen young priests from Africa. On the video call, Jolly noticed several young faces on the screen wearing priestly collars, and because the video call had several technological glitches that muted the audio portion, he looked them up online and sent them an e-mail asking if they would like him to record the evening session of the class so that they could hear it uninterrupted.

One of the priests he contacted was Father Samuel Okiria. Okiria serves in the rural eastern part of Uganda, a country in East Africa. Okiria has served in various capacities in the Diocese of Soroti, including as a teacher, parochial vicar, the bishop’s private secretary, vice-chancellor, and most recently as a professor at a national seminary.

Okiria learned of the course after reading a May 2021 article on CNA. He said part of the reason he so much wanted to pursue the St. Joseph class, and to share it with his fellow priests, is that many of his fellow priests in his diocese are doing their pastoral work alone, with little or no assistance, and need encouragement.

In his email to the priest, Jolly offered to record the live Zoom call and send Okiria the video, since it was clear that internet problems were making it difficult for the Ugandan priests to join in the live sessions. Okiria was very grateful, and the two struck up conversation.

“We got to talking via email and we were talking about COVID, and the pandemic, and how their schools were completely shut down. They’ve been shut down much longer than we have, and much harder shut down,” Jolly told CNA.

“They’re just now going back in the K-12 schools, and of course education is tough there anyhow, right? Because they don’t have the infrastructure of education that we have.”

Father Okiria’s parish is in an especially poor part of a largely agrarian region, where cattle farming and crops such as potatoes and cassava dominate. Resources are scarce for the Catholic schoolchhildren.

Wondering how he could help, Jolly turned to his love of math. As a worker in the high-tech industry, he’s a whiz with numbers, and enjoys creating educational puzzles and resources.

Jolly offered to create math-based activities and resources for the Catholic school students in Uganda. In the months since, he and Father Okiria have exchanged puzzles, math games, and even a glossary Jolly created listing common math terms, which has since been translated into four languages.

“One of the great things about math is that it is in fact universal. Now, the ways that we approach math are not universal…but the way that people come to the answers is really cool,” Jolly said.

“I’ve found that the games that I’m presenting to the Ugandan students are also things that are delightful to kids here in Longmont.”

Okiria, in return, has celebrated numerous Masses for Jolly and his family, for which Jolly says he is very grateful. Despite the time difference and a language difference, it’s the same Mass, and Jolly said it has been meaningful for him to meditate on this fact.

“Just make the connection and see where it goes. Let the Holy Spirit take it where it needs to go.”

The St. John Vianney Seminary Lay Division is sponsoring a number of lectures and courses in the coming months, including a free lecture from Cardinal Stafford on the Liturgy of the Hours; a three-week course on the Eucharist; and a six-week course on the Sacred Heart. For more information, visit their website or contact them at 303.715.3195 or laydivision@archden.org.