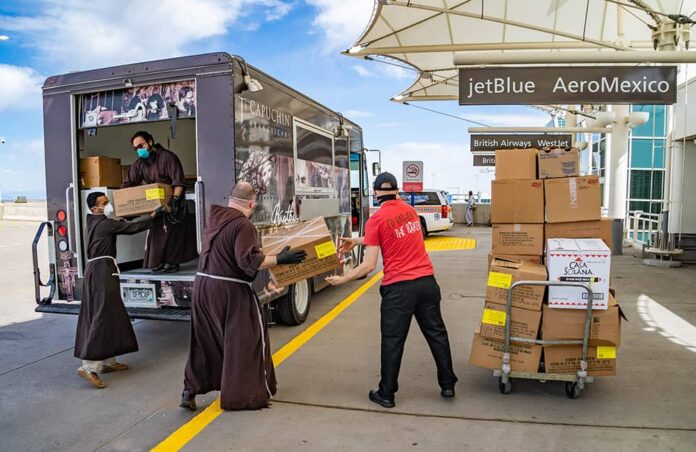 On May 5, the Colorado Capuchins quietly marked their 50th anniversary of serving in Colorado.

What was intended as a jubilant celebration with Masses from both of Denver’s bishops did not happen due to the COVID-19 pandemic and the postponement of public Masses. However, the friars of the Capuchin Province of St. Conrad celebrated by doing what they do best: humbly serving the people of Colorado.

In the spirit of the present circumstances, however, they also began reaching out to people in a socially-distant way. They began livestreaming a Mass from the St. Francis of Assisi Friary for the faithful to tune into and are creating a series of videos on their rich 50-year history here in Colorado. Additionally, the friars have been posting daily videos of encouragement on their YouTube channel (youtube.com/user/CapuchinFranciscans). The Masses can also be viewed there.

In a blog post published on the Capuchins’ website July 12, Brother Mark Schenk, O.F.M Cap., Provincial Minister of the St. Conrad Province in Denver, wrote about the mission of the Capuchin Franciscans in Denver over the past 50 years.

“This year our province joyfully commemorates 50 years of Capuchin presence in Colorado,” Brother Schenk wrote. “Pope Pius XI once said of the Capuchins, ‘When help was sorely needed, in places that were abandoned and where no one else would go, there you will find the Capuchins.’

“Over the past 50 years, we have striven to be faithful to that identity, bearing the joy of the Gospel to the marginalized and forgotten. It was need that brought us westward and it was need that inspired our multitude of ministries to the poor, lost, sick, dying and imprisoned of Colorado.”

The Capuchins came out west to Kansas in 1878 in response to a request from Bishop Louis Mary Fink of Leavenworth to care for the numerous German-speaking immigrants from Russia’s Volga River who were settling in the area around Hays. In 1970, following the Capuchin charism of going where they are needed, they expanded their ministry to Colorado at the request of Archbishop James Casey, who needed assistance in pulling Annunciation Parish in Denver back together.

On the morning of May 5, 1970, Father Paulinus Karlin and another friar on loan from Puerto Rico left Kansas and drove to Annunciation where a new chapter of Capuchin history began. The Capuchins remain at Annunciation Parish to this day, where they continue to embody the spirit of St. Francis of Assisi in brotherhood, poverty and fierce dedication to the parish and the people in the surrounding neighborhoods.

“Today we continue the ministry of St. Francis of Assisi, bearing the Gospel to peoples and places that are neglected and forgotten,” Brother Schenk wrote. “Whether it be in the poor parishes ministering to immigrant populations, in the hospitals and care centers where our friars kneel in prayer at deathbeds or on the city streets where we offer food and fraternal love to the downcast and destitute, we want to venture where no one else will go.”

Among the many footprints the Capuchins have laid down in Colorado is the Samaritan House, which is now the largest Catholic homeless shelter in Colorado. Although they are no longer directly involved with its operation, the friars helped to plant the seeds for it through their Samaritan Shelter opened in 1982, and they maintain a constant presence there through a friar who serves as a chaplain.

One of the more innovative ways that the Friars reach out to those in need is through a food truck that the province launched in November 2018. Painted Franciscan brown with colorful artwork depicting local friars engaged in ministry as well as Saints Francis of Assisi and Padre Pio, and Blessed Solanus Casey, the truck includes white text on the back acknowledging partnership with the Routzon Family Foundation, while messaging on the sides identifies it as belonging to the Capuchins and describing their mission as “Messengers of God’s mercy” and “Brothers to those in need.”

Additionally, in 2011, the friars founded the Julia Greeley guild in honor of Julia Greeley, a former slave and lay Franciscan whose cause for canonization is currently underway. If she is canonized, she would be the first saint declared from Colorado.

Today, pandemic or not, the Capuchin Franciscans of the St. Conrad Province continue to live out their charism of brotherhood and sharing the Gospel with those who need it most.

“We continue to seek out the abandoned places where aid is sorely needed,” Brother Schenk concluded, “working alongside the laity to bear the good news of the Gospel where the need is desperate and few are willing to go.”