Christmastide lessons from Linus and the lowly shepherds 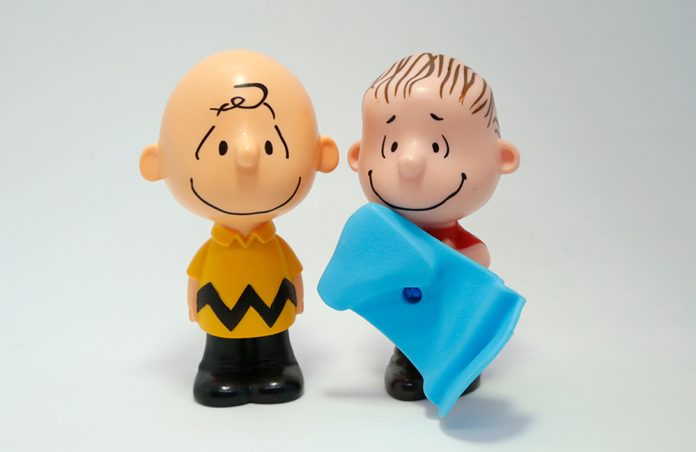 And in that region, there were shepherds out in the field, keeping watch over their flock by night.  And an angel of the Lord appeared to them, and the glory of the Lord shone around them, and they were filled with fear.  And the angel said to them, ‘Be not afraid; for behold, I bring you good news of a great joy which will come to all the people; for to you is born this day in the city of David a Savior, who is Christ the Lord. And this will be a sign for you: you will find a baby wrapped in swaddling clothes and lying in a manger.’ And suddenly there was with the angel a multitude of the heavenly host praising God and saying, ‘Glory to God in the highest, and on earth peace among men with whom he is pleased.’ And they went with haste, and found Mary and Joseph, and the baby lying in a manger.”
Luke 2:8-14, 16

Perhaps no other Christmas image stands in defiance of the commercial and worldly notion of the holiday than the humble image of the shepherds keeping watch over their flocks in the fields as the Christ child is born. This scene is at the climax of the 1965 TV movie A Charlie Brown Christmas when Charlie Brown cries out, “Isn’t there anyone who knows what Christmas is all about?” Linus comes to the rescue and delivers the most profound performance of the movie, quoting almost verbatim from the scene in Luke’s Gospel. Linus’ moment in the movie is much like those shepherds in the field. His character is quiet, lowly and mostly unnoticed by his peers; but Linus represents in the movie much of what the shepherds represent in this scene in Luke. They are both castaways, lowly, forgotten and humble. As we are entering into the yearly frenzy of the end of Advent and the beginning of Christmastide, these good shepherds serve as an image that our commercialized and secular world would do well to meditate on.

It is easy to overlook these shepherds in the nativity narrative, and to do so would be in keeping with those in the time of Jesus’ birth. The shepherds in the gospel represent men and boys who were not well thought of in society. They held no status; they were away from the hustle of the towns for the most part in their work, and they were as dirty and smelly as the animals in their flocks. Shepherds were those blue-collar workers of their time who were cast aside by many in society. If the shepherds were to try to enter the Temple to offer worship, they would not be allowed as they were considered ritually impure. No one would mistake the shepherds for anything special in these times. Their dress, smell, education level and occupation would ensure they were kept in their place by the community around them.

If society rejected and overlooked these men, it begs the question: Why did God send the angels to announce the birth of Jesus to them? Why didn’t the angels go to the High Priest or perhaps King Herod? Why was the birth of the King of Kings announced first to some smelly shepherds keeping watch over the flocks? Perhaps it was partially the lowly state of these men that God found pleasing to send the heralds to announce the birth of his son. Perhaps it was because they represented, outwardly and inwardly, something that was countercultural to the time.

As we are entering into the yearly frenzy of the end of Advent and the beginning of Christmastide, Linus and the good shepherds serve as an image that our commercialized and secular world would do well to meditate on.

Our society today is not much different than the one in the time of the shepherds. We value glamor and glitz and as a collective try to distance ourselves from the idea of lowliness and poverty. We often measure success by outward material displays of wealth. Having the best brand of car, purse, watch, jeans and shoes are yardsticks of how we measure success. It is easy for anyone to fall into the trap of lusting for outward riches.

The shepherds in the fields outside Bethlehem were not worried about such things, and perhaps we need to take a page from their book. Their lowliness and their poverty (both in the material and spiritual sense) made them well-disposed to knowing and hearing the message of the angels announcing the birth of Jesus. It is ironic that when we choose to celebrate the gift of the Savior, which was announced first to these lowest ones, we materialize the celebration with a disordered emphasis on buying things versus trying to be like the shepherds in the field.

The reality is that God revealed something so incredible to these shepherds as the angels announced the good news to them. God’s power and majesty is manifested to them in an incredible way that we can also learn from today. Do we allow ourselves to experience the awe, trembling and the gift of rightly seeing God’s manifest glory in the Christmas mystery? As children this is easier, perhaps aided by the anticipation of presents; but as adults we must allow ourselves to get lost in the same awe that the shepherds experienced. There is nothing more amazing than the Son of God taking our flesh at Mary’s fiat in the Annunciation and then being born as a lowly babe in the manger. This amazing reality is what dawned on the lowly shepherds in the field, and it must dawn in our hearts, too, if we are to experience the joy of Christmas.

The lowly shepherds were the first outside of the Holy Family to adore the Second Person of the Trinity that had taken on our human nature. The great fear they experienced when the angels appeared was turned into haste as they followed where their hearts bade they go, lest their hearts burst in their chests.

At the news of the angels, there was nothing left to do for the shepherds except to make haste to fulfill the deepest longing of the human heart; to find and worship in humility God come in the form of a baby at Mary’s breast. These rough men, those who made their living in one of the hardest ways possible, rightly used the gift of fear of the Lord to help bring to perfection the virtue of humility.

We need humility, too

You and I, our families and humanity are in the deepest need of true humility. We need right understanding of who we are and who God is to us. We need to allow the gifts we have received in our baptism and confirmation to blossom into the fruit of humility in our dealings with God. This is born of true encounter with Jesus, but this is impossible if we do not see our need, our poverty. The shepherds knew who they were in society, and they knew of their need for God and the lack they had in their heart. If we understand our need, we can then allow our hearts to encounter Jesus; but if we don’t know of our poverty, our lack, then we will never truly encounter him.

The reality is that God revealed something so incredible to these shepherds as the angels announced the good news to them. God’s power and majesty is manifested to them in an incredible way that we can also learn from today.

This must be our lesson this Advent and Christmastide. In humility of heart, we can ask Jesus to make us like the shepherds, aware of our lowly state before God. In this knowledge, we can then search ourselves to find how incapable we are of anything good or beautiful without the action of God and his grace in our lives. From this graced knowledge, we can open ourselves to encountering Jesus as the shepherds did; with an understanding of our lowliness, experiencing fear of the Lord and growing in humility. This is Christmas! This is what it means to experience Christmas, perhaps as we never have before. Allowing God to arrive once again but receiving him in the quietest and most awe-filled way that leads us to the end goal of the human heart: union.

The lowly Linus had it right when he responded to Charlie Brown who was filled with aggravation and angst when he told him what Christmas was about. Perhaps you and I can ask for the grace to see things a bit more like Linus, or better yet, a lot more like the shepherds this Christmastide.