His Church. Our Experience.
Subscribe
HomeChristmasChristmas 2021: Yes, you get to go to Mass twice!
ChristmasThe Catholic Faith 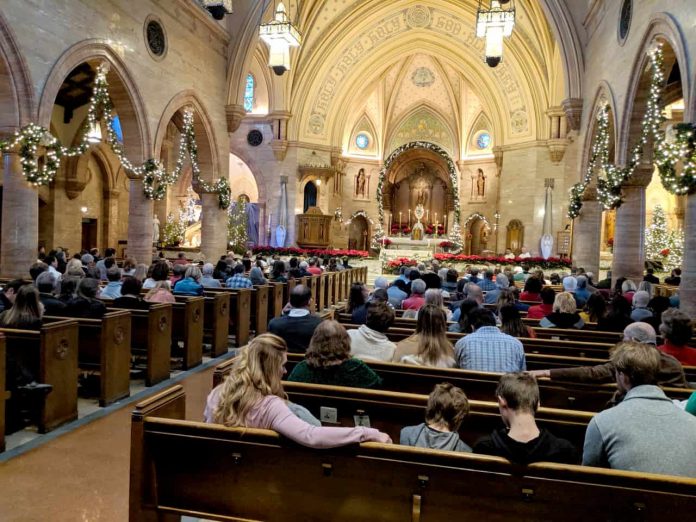 Confused about your Mass obligations over this coming Christmas weekend? See the below graphic and article for more details about why it’s required to go to Mass twice this weekend. Then, find a Mass using the Parish Locator! 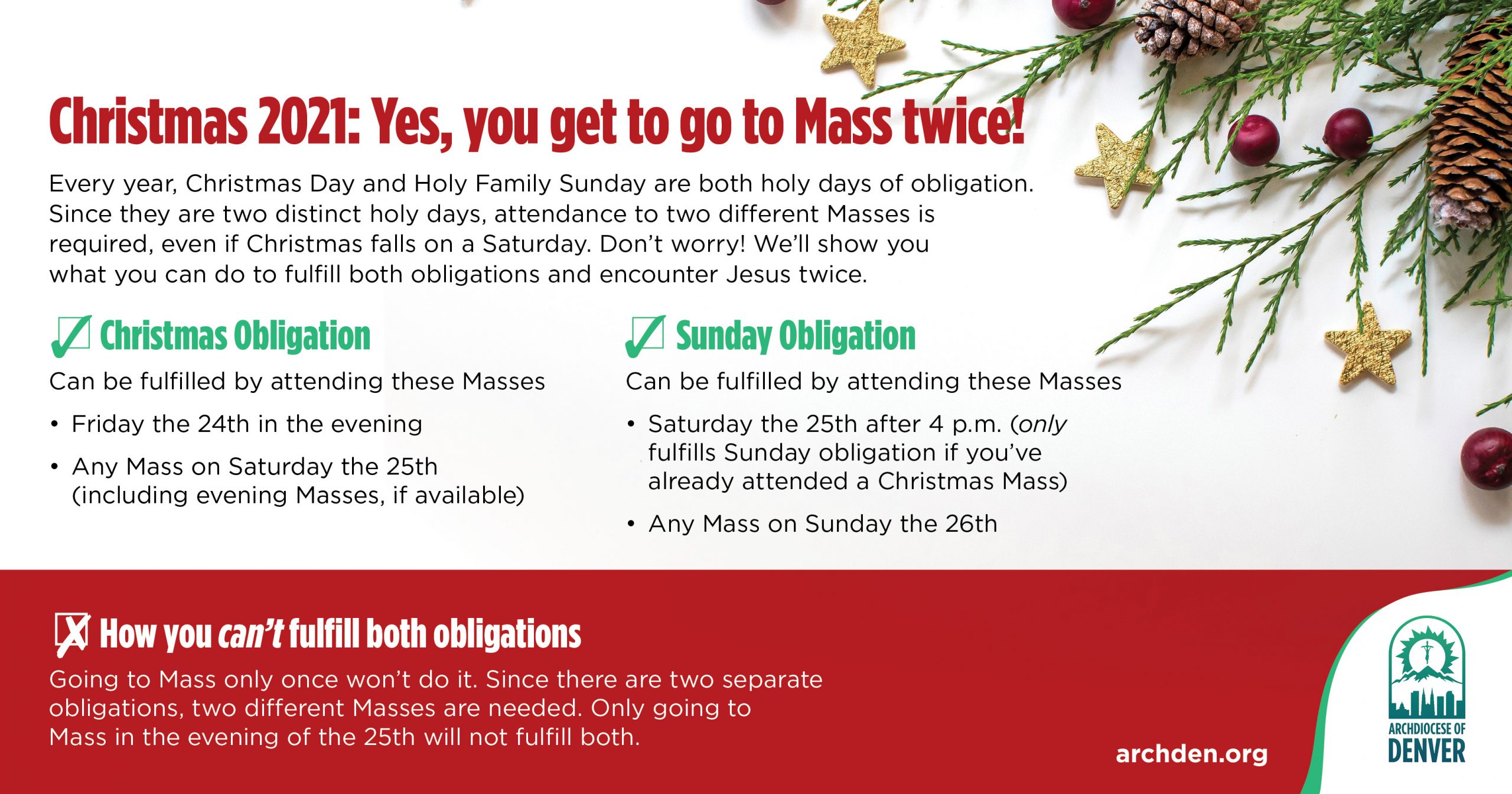 With the precepts laid out, we’ll give our best shot at a short explanation of the rules, but first, let’s talk about the elephant in the room: Is it really that big of a deal if I just go to Mass once on Christmas weekend?

It’s a valid question, but, as appealing as it may sound, it ends up missing the point of what Mass is all about.

Like Father Daniel Cardo, pastor at Holy Name Parish in Sheridan, Colo., put it, attending Mass is both an act of love and an act of justice. It’s something we must do and something we should love to do.

“This might sound like an arbitrary or external rule, but in reality, it is an expression of the great dignity of all the faithful, who are called to partake in the infinite offering to God that is the sacrifice of the Mass. Sunday obligation is an act of love and of justice: we have to give to God from what He has given us,” he explained.

First, the Mass is the greatest gift that God could’ve given us. It’s in the Mass that he has chosen to give himself to us in the Eucharist. Is there a greater expression of our dignity than God allowing us to consume him in order to be in communion with us?

Second, the Mass is the way Jesus wanted to be in communion with us from the beginning. He said, “Do this in memory of me.” What do we do when a gift of this magnitude is offered to us? We respond out of love, but also out of justice. He has given everything to us, and we owe him something for it. He established a covenant with us, but a relationship can’t be one-directional. It requires mutual self-gift. The Mass is our “yes” to that relationship, to that covenant. If we choose not to go to Mass without grave reason, we’re choosing to break that covenant, to turn our back on what he’s done for us. That’s why it’s such a big deal; that’s why not attending Mass without grave reason is considered a mortal sin.

Care for a quick explainer?

The interesting part about this year’s Christmas and Sunday Mass situation is that two different laws collide – one canonical, one liturgical.

The Liturgical Law sets Christmas at a higher rank than Holy Family Sunday (the Sunday after Christmas). For this reason, all Masses celebrated on the 25th must be Christmas Masses no matter the time – that is, they must use the Christmas readings and prayers.

The scenario we encounter this year is that Christmas Day falls on a Saturday, which begs the question, “Can evening Masses on Saturday the 25th (if offered) also fulfill the following day’s Sunday obligation?”

“A person who assists at a Mass celebrated anywhere in a Catholic rite either on the feast day itself or in the evening of the preceding day satisfies the obligation of participating in the Mass.”

This means that, even though an evening Mass on the 25th is still a Christmas Mass, it can also fulfill the next day’s Sunday obligation because it is celebrated “in the evening of the preceding day.”

However, it’s important to note that two obligations still means two Masses. For this reason, both obligations can’t be fulfilled simultaneously with only one Mass on the evening of the 25th.

Mass in the evening of the 25th is like a “wild card,” if you will, that can count towards one obligation or the other, but not both simultaneously.

Of course, this only matters if your parish offers Masses on Christmas evening. Most parishes won’t.

Can I receive the Eucharist twice in one day if I want to fulfill both obligations on the 25th?

A possible way of fulfilling both obligations is by going to a Christmas Mass before 4 p.m. on the 25th and then to another Mass after 4 p.m. that same day. In this case, the evening Mass would count as a vigil Mass and fulfill Sunday’s obligation. It’s a possibility, though perhaps not the most recommended.

In this case, a person can receive the Eucharist twice that day, provided that they participate in both Masses from beginning to end.

So, let’s joyfully go to Mass twice this Christmas weekend and fully enjoy it for what it is: an opportunity to encounter Christ in the Eucharist twice! Find a Mass using the Parish Locator.

Also, New Year’s Day (The Solemnity of Mary, Mother of God) is not a holy day of obligation in 2022. We will explain that in an article next week!