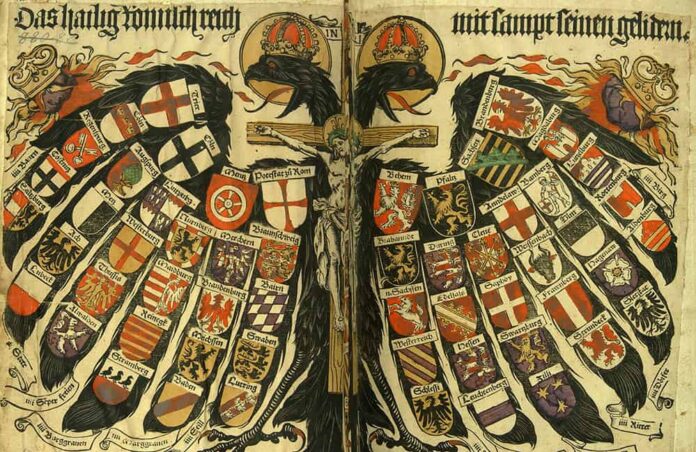 We have come to think of the Church, the gathering of God’s faithful, in primarily spiritual terms. Throughout Christian history, however, faith implied social and even political obligations, which supplied a concrete expression for the Christian life. In the history of Christendom, one political organization prominently stands out: The Holy Roman Empire. We think of the Roman Empire as ending in 476, the date of the abdication of the last emperor in the West, although it continued with unbroken succession in the Byzantine East until 1453. In the year 800, Pope Leo III crowned a new emperor in the West, Charlemagne, to serve as the preeminent political ruler of Europe and the protector of the Church. Emperors were longstanding partners of the Pope, the one serving as political and the other as spiritual head of Christendom, though they often turned into rivals.

Peter Wilson provides a thorough account of the Empire, and a defense of its effectiveness as a political body, in his Heart of Europe: A History of the Holy Roman Empire (Belknap, 2020, paperback ed.). The extensive book (of just under 1,000 pages) does not provide a standard chronological account of figures and events, as it examines the overlooked heart of European culture through three sections focused on the ideal of the Empire, its unique sense of belonging that held it together, and finally its governance. The book’s organization provides an interesting and fresh approach, but it could have used a stronger narrative through coherent stories and summary of the key contributions of important figures (somewhat supplied by the timeline at the back of the book).The Empire’s key characteristics included its transnationality (centered in Germany and embracing at least parts of twelve other modern states); its decentralized authority, with governance dispersed among the Emperor, kings, electors (tasked with voting for new emperors), princes, prince-bishops, counts, knights, and free cities; and its cooperation with clergy, with bishops integrated into its civil rule.

As the nature of Christendom implies, the Church is not solely spiritual; it is a lived social and even cultural reality in the world, and the laity have a role in regulating Christian life in the world. The emperor was the chief representative of the laity and even held veto power within the papal conclave. As such, the emperor was the main defender of Christendom against external enemies and promoter of internal peace. The Holy Roman Empire experienced remarkable stability and purpose, uniting such a large expanse of territory and peoples through an understanding of the Empire’s role in the defense of local rights and of Christendom itself. It provided a sense of corporate identity and freedom by seeking consensus and peace, rooted in faith: “Freedom was expressed and celebrated collectively through communal gatherings and festivals, and by verbal and visual reminders of the community’s traditions and identity” (579).

Christendom is currently taking on new forms in the southern hemisphere. Despite having its original heartland in the Middle East, even 100 years ago it would have made sense to speak of Christianity as a religion centered in Europe and North America. No longer. There is a drastic shift in the proportion of Christian population to the southern hemisphere, ensuring Christian growth for the next 100 years and leading to new spiritual and social expressions of the faith. Philip Jenkins thoroughly explains this shift in The Next Christendom: The Coming of Global Christianity (Oxford, 2011, 3rd ed.). Although the Catholic Church should experience significant growth in Latin America, Africa (which will become the largest Christian continent), and Southeast Asia, much of the global growth comes from Pentecostal and independent groups. “The Christian world will have turned upside down,” Jenkins notes, as a solid majority of Christians will come from the south, while “Christianity worldwide is becoming steadily more charismatic” (113, 85).

With growth in numbers, new social expressions of Christianity will follow. And like the Dark Ages of Europe, the Church is stepping into the social void to provide stability: “All too often the Catholic Church occupies such a prominent role because it is literally the only institution that can hope to speak for ordinary people” (179). As Christians work to rebuild society, “we might even imagine a new wave of Christian states, in which political life is inextricably bound up with religious belief” (172). It is hard to predict the future, even as a very different trajectory seems inevitable, as the Christian faith, once again, proves itself adaptable by finding fertile soil for spiritual and social renewal. Reflecting on Christendom helps us to realize not only what we’ve lost, with the breakdown of the social reality of the Church in the West, but what could be, building upon the growth of Christian culture in the global south.