Christ, the ballast of Christian community 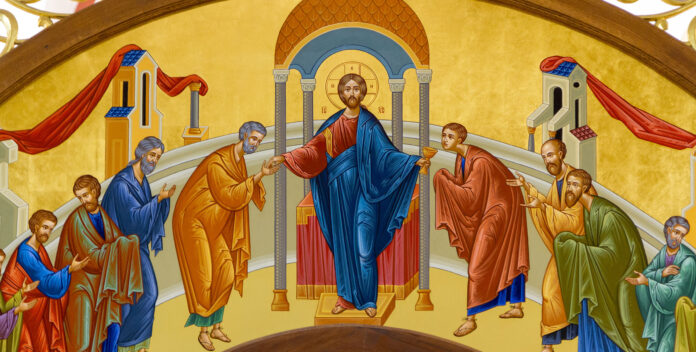 On the morning of August 10, 1628, the Swedish warship Vasa set sail from its harbor in the port of Stockholm. Built on the order of the Lutheran King Gustavus Adolphus to aid the war efforts against Catholic Poland, the Vasa was a true flagship, one of the most formidable maritime vessels ever created. She was stunningly adorned, with an ornamental beauty yet to be seen on a ship of her size. But she had to be powerful, for the tactics of naval warfare in the Baltics were changing. For this reason, the King called for an unprecedented armament, and the Vasa set sail for battle with a double deck of 72 cannons.

What is distinctively Christian in Christian Community?

In these days of a waning pandemic, many Catholics feel adrift amidst the flotsam and jetsam of ecclesial life. Church closures and sacramental restrictions are only the tip of the iceberg; what lies beneath is an unabating sense of isolation and existential confusion. But despite these hardships, we have been given a new opportunity to reflect once again on the question of community. Though constantly liable to the superficial, the word “community” strikes at the heart of the Christian mystery of God. For this reason, one of the first acts of the Church in a post-pandemic world is to reflect anew on what is distinctively Christian about Christian community.

First and foremost, community arises out of an encounter with Jesus Christ. This is significant and not to be overlooked, because it relegates all other relationships to a secondary and subsequent position. In 10 years of marriage preparation, I have found this a most challenging truth to communicate; that the uniqueness of Christian marriage lies not in the qualitative intensity of the love of spouses, but in the infinitely mysterious love of the Trinity. As Pope Benedict XVI writes, the encounter with Jesus Christ, truly risen from the dead, completely redefines our understanding of love:

“Jesus’ resurrection was about breaking out into an entirely new form of love, into a life that is no longer subject to the law of dying and becoming but lies beyond it a life that opens up a new dimension of human existence. Therefore, the resurrection of Jesus is not an isolated event that we could set aside as something limited to the past … [Rather], a new possibility of human existence is attained that affects everyone and that opens up a future, a new kind of future, for mankind.”1

The divine love of Christ, then, is not supplemental to the more immediate loves of our worldly life; it is essential and foundational. The love of a friend or spouse, children or parents, all find their origin, purpose and grounds in the love of God discovered in Jesus. Within the historical fact of Christ, we encounter God not just as one love among others, but because he himself is love, the very structure of love is reconstituted around him.

Part of the spiritual poverty of our age is that we have relegated the love of God to this accidental sphere; that is to say, we can opt in and out of this love through the preferential option of a Christian lifestyle. This seems to be one of the main reasons why the majority of Catholics don’t practice their faith: it’s not simply that it’s inconvenient, it’s that it’s inessential. We find here then a deeper problem: that love in the post-modern world has been naturalized. The naturalization of love, a baseline presumption in our day, means the following: that the loves of my life, that vast relational nexus of family, friendship, and community, exists autonomously and completely on its own. With this as the starting point, the logical conclusion is that relationships have no need for the supernatural.

This illusion of self-fulfillment in naturalized love is alive and well in the Church. Take for example, the commonplace language of “building community.” Though often employed by well-intentioned people, why does the phrase strike us as empty and uninspiring? Because it insinuates community as something fabricated and man-made. In other words, when we build community, we do so on a natural level alone. We therefore need to recover the basic truth of Christian community – namely, that God, and not us, is the primary agent; he is the one who actually builds. Borrowing a word from Tolkien, human beings are by nature “subcreators” and thereby secondary in the line of causality. We build community only in and through God, himself being the exemplar of community.

An Encounter with a Concrete Event

Returning then to the question of what is distinctively Christian about Christian community, our answer is forthright: that it arises from and exists completely for the encounter with the risen lord Jesus Christ, the event of the love of God. As Julián Carrón explains, the true encounter with God always occurs within the event of Christ:

“Christ is not an idea or a thought, but a real event that bursts into my life. I encounter something that has something within and that magnetizes my being. Jesus Christ, that man of two thousand years ago, is immanent, becomes present, under the veil, under the aspect of a different humanity.”2

We oftentimes think of the encounter with Jesus as elevating the experience of human life, transcending the world in grace and drawing us up towards the life of heaven. And this is indeed true, but it’s only half of the story. In becoming man, God concretized himself in humanity. In this way, Jesus grounds us in the world, anchoring us to the physical. The gift of grace does not turn us into angels; it makes use more human. This humanizing aspect of grace reveals the deeper Christian truth: that Christ is the concretissimum, the most concrete thing in reality, as Hans Urs von Balthasar says. The essence of Christian discipleship is then not the abstraction of ideas, but the concretization of love. In that case, we need to stop speaking abstractly about community and begin living it in a concrete and human form.

The Vasa never made it to Poland. In fact, she never made it out of Stockholm. Travelling three quarters of a mile, her maiden voyage ended in utter catastrophe as she collapsed and sunk. Over three centuries later, in 1961, the Vasa was salvaged from the bottom of the Stockholm harbor with remarkable integrity. It can now be visited, almost in its entirety, in the Vasamuseet. Though at the time of the wreck the inquest was inconclusive, we now know the simple reason why the great Vasa sunk – she was inherently unstable because her center of gravity was too high.

Every ship has a ballast, a weight placed at the bottom of the hull to keep her steady. Though the Vasa had a ballast, it was insufficient to keep her in balance. The lesson holds for the little barges of Christian community; they need to be held steady by a ballast of sufficient weight. Jesus Christ, the concretissimum, is the ballast of the Church, and thus all Christian community. Hidden within her inner life is this ballast, the secret to how she holds stable amidst the violent winds of ideology and the constant mutiny of sin.

This is of particular importance now for our local Church. Hearkening the aquiline call to embrace this apostolic moment, we are launching out of the modalities of Christendom and into the new waters of the post-Christian world. These waters are new but not unfamiliar, for they look similar to the Church’s passage through the ancient world. As Pope Benedict XVI suggests, the success of that ancient missionary endeavor lay not in the execution of strategic planning, but in the community established with Christ as ballast:

“The early Church, after the end of the apostolic time, developed a relatively reduced missionary activity; she had no strategy for announcing the faith to the pagans … and yet even so this time became a period of great missionary success. The conversion of the ancient world to Christianity was not the result of a planned action but of the proof of the faith in the world as it was made visible in the life of Christians and in the community of the Church. Humanly speaking, the real invitation from experience to experience, and nothing more, was the missionary power of the early Church.”3

The future of the Church is to be found in concretely lived small communities, ones that are decidedly Christian in character. The neighborhoods of cultural Catholicism have faded away, as have their classical expressions in parochial life. In this great apostolic moment, when the Church awakens anew to mission in a post-Christian world, may she be mindful that community is not a means to mission, but the heart of mission itself. For if she were to load her ship with too much armament for evangelization, her endeavor may be subject, like that of the Vasa, to capsize. With the ballast of Christ, she remains grounded in the truth of her existence – the community in God. And for that reason alone, no matter the storms that may come, true ships of Christian community will always arrive safely in eternal harbors.

2 J. Carrón, The Radiance in Your Eyes: What Saves us from
Nothingness?
Human Adventure Books: Tampa and Denver, 2020, 64.