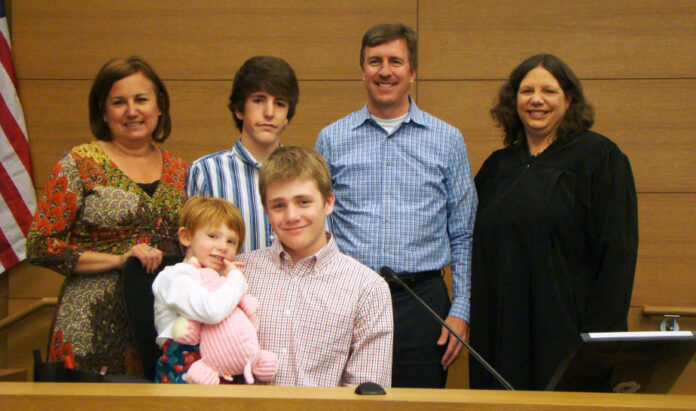 Three women who came to be mothers through adoption share the stories of their journeys to motherhood, and how adopting children has blessed their lives.

Dona Traynor | on raising a priest
Dona Traynor, 75, believes her journey to motherhood must have started at a very early age.

“I spent endless hours in middle school babysitting neighborhood children and loved that responsibility entrusted to me,” she told the Denver Catholic Register from her home in Lakeville, Minn. “I have always loved working with young children. And I am totally mesmerized and captivated with babies!”Before she and husband John were married 52 years ago, they talked about the “what-if’s” if they did not have any biological children.

“We both responded with a resounding ‘yes’ to adoption,” she said. “We didn’t have birth children, so it was an easy and natural choice for us.”

In the late 60s-early 70s, they adopted three children as babies: Kim, Michael and Scott.

“It was quite rare to have three adoptive children,” she said.

Compounding that blessing is that baby #3 is now a priest. Father Scott Traynor, 42, was ordained on his parents’ wedding anniversary, June 23, in 2000. He currently serves as the rector of the St. John Vianney Theological Seminary in the Archdiocese of Denver.

“John and I have always been deeply appreciative of our very strong Catholic upbringings and certainly have endeavored to pass that same gift on to our children,” she said. “To see (our children) today as Catholic adults living mature, Christian lives is a tremendous blessing.”

For someone considering adoption, she suggested prayer.

“Pray to Our Lady for she knows our hearts and our deepest needs, as she is a mother herself,” Traynor said.

Heather Akers | on trusting God’s plan
Heather Akers, 38, with her husband Ben, eagerly anticipated having a baby right after they got married. But God had a different plan.“We hoped and prayed for a child for nine years before God brought us our eldest little girl,” she said of daughter Francesa, now 3 years old. “Realizing that after nine years we may not be able to have biological children, we started the adoption process.”

They found out about Francesca, who was nine months old at the time, through a friend. Within a month, she was in their home.

“It was such a miracle for us,” Akers said. “To go from no children and the hope of an adoption, to a 10-month-old baby within the space of a month, was a bit of a whirlwind.”

Though it was an adjustment and a challenge, she said, she felt her heart expand to incorporate the new life given to them “out of the blue.”

“I think one of the biggest surprises about motherhood,” she said, “is how quickly love for Francesca grew in my heart.”

“Most adoptive parents wait for years to adopt each child,” she said. “God miraculously gave us our little girls quickly.”

Participating in open adoptions, where they keep in touch with the girls’ biological parents, has also proven to be an unexpected blessing.

“It is an honor to get to know the women who selflessly sacrificed for their child,” Akers said.

She suggested when trying to adopt, in addition to prayer, to let people know.

“Tell people that you’re trying to adopt,” she said. “So if they come across a woman who is looking for an adoptive couple, they can remember you.”

Anne Kochevar | on embracing the unexpected

In 2010, Anne Kochevar, 49, introduced the possibility of becoming a foster family to her husband Russ and their two teenage sons, Jackson and Harrison—who were adopted through Catholic Charities in the late 90s.By October that year, after meeting eligibility requirements and completing training, they welcomed newborn Alyssa into their home for foster care.

“She’s very sweet; very dear to our hearts,” Kochevar told the Denver Catholic Register when featured in May 11, 2011 article—though the long-term hope was that Alyssa would be reunified with her biological parents, a couple living in Denver.

“Alyssa stayed with us another year,” Anne said last week from their Centennial home. “She went home for about six months, but ‘Mom and Dad’ were really struggling.

“They fell back into old habits,” she said, not specifying what those habits were.

Alyssa returned to the Kochevars, who stayed in touch with the biological parents.

“We really got to know ‘Mom and Dad’ in the process,” she said. “We knew there were some pretty major issues… their pattern of not being able to maintain.”

But they contended foster care was a temporary situation and continued to hope for reunification.

“Alyssa was supposed to go home,” Kochevar said. “Everyone involved tried to do everything they could to get her home.”

However following another stint, a court made the decision that Alyssa would not be returning to her biological parents. For all but 10 months of her 3 ½ years, she had lived with the Kochevars—and on March 28, she was officially adopted.

“It’s not easy for them,” Kochevar said of Alyssa’s biological parents. “(But they said) if she’s going to be anywhere, we’re happy she’s with you.”

It was closure, she said, after a long journey.

“We went into this just planning for foster care,” she said with a laugh. “And now we’re starting over. It’s an unexpected surprise.”

To find out more about becoming a foster family with Catholic Charities, attend an informational meeting 7-8 p.m. May 21 at the St. John Paul II Center at 1300 S. Steele St.