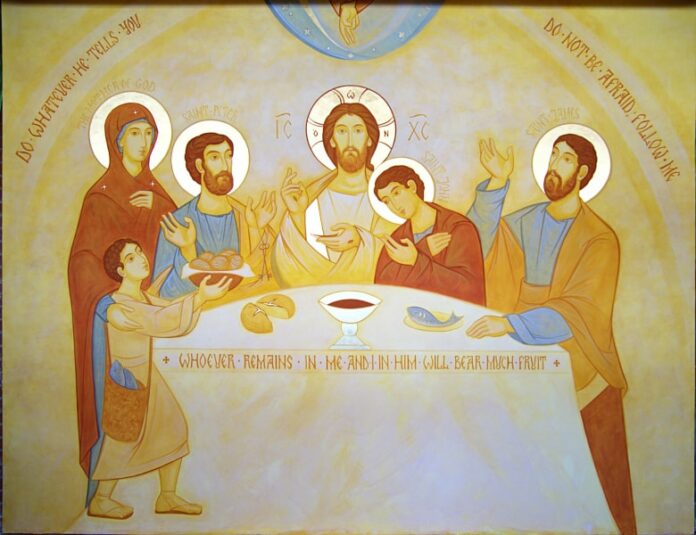 The heart of St. Mary Parish in Littleton—an adoration chapel open 24 hours, seven days a week— is beating a little stronger with a new spiritual mural celebrating the holy Eucharist.

Pastor Alvaro Montero, D.C.J.M., said the parish’s adoration chapel is a vital organ for the parish because at least two parishioners are in active prayer around the clock. The new mural will aid in the visualization of Jesus and the Eucharist, he said.

“If I am called out at 3 a.m. I know people are in the chapel praying,” Father Montero said. “It is a good reminder that I am not alone.”

The prayerful can now gaze upon a 132-square-foot mural completed in three weeks by Romanian icon painter Brother Ioan Patriciu Gotia. Brother Ioan has a doctorate in ecclesiastical sciences from the Pontifical Oriental Institute in Rome where he specialized in Byzantine iconography. His icons and icon murals grace churches and chapels in Italy, Spain, Austria and Romania and have been used for book illustrations and book covers.

The mural at St. Mary’s chapel is Brother Ioan’s first icon produced in the United States. It decorates an area on the chapel’s front and curved walls. The mural depicts the Last Supper, disciples Peter, John and James, and the Blessed Mother. A quote above Mary, “Do Whatever He Tells You,” refers to the wedding at Cana where Jesus performed his first miracle of changing water into wine.

“Icons are the best combination of art and religion,” Brother Ioan said. “Art and prayer go together, whether that is painting, sculpture or church music. They all draw us to our Lord.”

Father Montero recruited Brother Ioan for the work because both men are members of the Disciples of the Hearts of Jesus and Mary. The religious order, based in Madrid, Spain, and started at St. Mary’s in 2007 under then-Archbishop Charles Chaput, emphasizes family and youth ministry and strong Catholic education from elementary through university.

The order serves only one other U.S. parish, which is in Virginia.

Brother Ioan traveled from Europe to St. Mary’s, one of the archdiocese’s largest parishes with 2,400 families and about 500 students in its elementary through eighth-grade school.

The chapel was added during a renovation in 1999-2000 and shares a wall with the main church. That configuration caused an unexpected snag in Brother Ioan’s work.

Vibrations from the church’s organ caused his first icons to crack. He had to remove the paintings and with the help of an architect strategically place new sheet rock that resists the vibrations.

“It is so important to be aware that this work was not one man but the work of a team,” Brother Ioan said. “Not everyone can paint, but they took part through prepping the walls and support through prayer.”

The project received input from the parish council, other members of the Disciples and parish staff, Father Montero said. But perhaps the greatest influence came from Brother Ioan’s mother, Maria Manuela, an icon lover who lives in Romania and reviewed updated photographs of the mural emailed to her daily by her son.

“She was merciful and truthful,” Father Montero said.

Father Montero admires Brother Ioan’s family for surviving religious persecution under Communist rule in Romania from 1948-1989. His grandfather, a practicing Catholic, was arrested in 1948 when his grandmother was pregnant with Brother Ioan’s mother. She did not meet her father until she was 7 and visited him in prison.

“She was able to kiss him for the first time, but it was through the prison bars,” Brother Ioan said.

His grandfather spent 17 years in that prison because of his faith. When it is suggested his grandfather would be proud of his icon work, Brother Ioan quickly responds: “I am the one who is proud of him.”

The adoration chapel was closed during the work but the 24-hour prayer continued near the main church. The mural was first revealed to parish council and staff, followed by a larger showing to the congregation on Dec. 14 when the chapel officially reopened.

Brother Ioan had to return to Spain a few days before the big reveal.  He has two large icon projects next year in Austria and Spain.

The chapel is open to the public and the parish uses a sign-up sheet as a practical way to ensure someone is there at all hours to provide entry and maintain safety. Father Montero welcomes all Christians who believe in the Eucharist to visit. For more information, visit: www.stmarylittleton.org.

Roxanne King
Roxanne King is the former editor of the Denver Catholic Register and a freelance writer in the Denver area.
RELATED ARTICLES
Apostolic Mindset