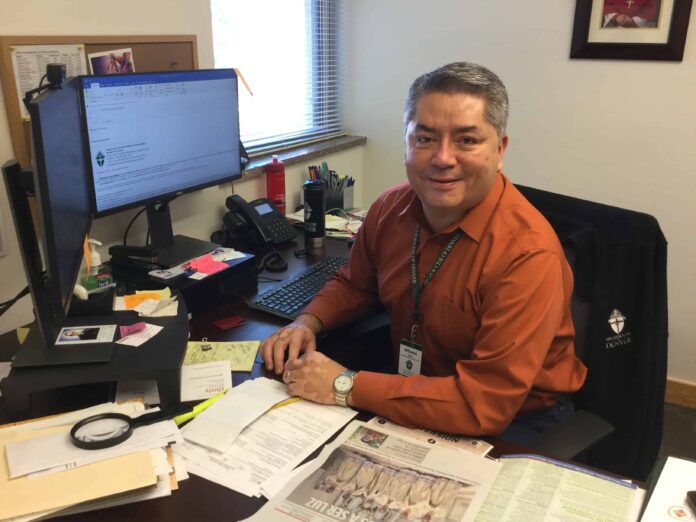 The Archdiocese of Denver announced Friday, May 31 the election of Alfonso Lara as the new Director of Centro San Juan Diego.

“I am very happy because I will return to CSJD where I worked for more than 11 years,” Lara told the Denver Catholic. “I will continue to serve the Hispanic community in the same way. I had the pleasure of being present at CSJD since before its dedication, before the building’s renovation, in the year 2002, at the beginning of this dream.”

Lara has served as the Director of Hispanic Evangelization for the Archdiocese of Denver for over a year and will transfer to CSJD in the next two weeks. He is married and has two children. Originally from Obregon, Sonora, Mex., he studied in the diocesan seminary at his birth city in the 90s and moved to the United States in 1999 after discerning his call to marriage. He began working at Annunciation Parish in Denver as director of religious education and youth minister. Before the foundation of CSJD, he was invited by then-Archbishop of Denver Charles Chaput and his assistant bishop Jose Gomez, to form part of the discussion committee for this project.

He began working for the Archdiocese of Denver in 2005 and served at CSJD from 2007-2018 as Director of Pastoral Services. In March 2018, he was named Director of Hispanic Evangelization and transferred to the St. John Paul II Center for the New Evangelization.

Lara will take the place of Juan Carlos Reyes, who passed away March 20. “Juan Carlos was a close friend and very dear to me because I had the opportunity to meet him since he was very young. He did an excellent job during his time at Centro,” Lara said.

He also assured that in his new position, he would like to “continue to research new human development programs; help people in their spiritual and academic needs by treating the person as a whole; assist those who want to become professionals; continue to provide educational programs for adults; direct people to the right resources; all with the goal of helping the person reach their maximum potential, not only in the social realm, but also in the political, economic spheres and in their relationship with God.”

Lara said he hopes his position will soon be replaced by the archdiocese and that “[in CSJD] we will continue to support the needs of this ministry.”

Lastly, the newly elected director of CSJD asked for prayers for this ministry. “I have the pleasure to say that I am going to work with a great group of people, and I trust in divine providence and in the prayers of the people of God. This is a ministry of the Archdiocese of Denver and I am an extension of the Archbishop Aquila’s ministry. When I serve, I do it in name of the Church and not my own,” he said.

CSJD is a ministry within the Archdiocese of Denver that seeks to provide support for the immigrant community by providing courses in English, computer science, free legal assistance, financial education and trainings for small business owners. It also offers college degrees in Spanish, which are valid in the United States, through an agreement with Universidad Popular Autónoma del Estado de Puebla UPAEP.