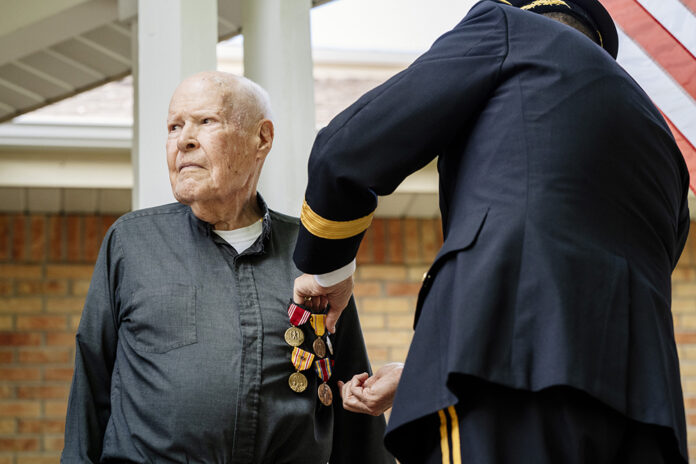 His tireless life of service, humble, gentlemanly demeanor and shining intellect exemplify why his is called “the greatest generation.”

In a recent surprise ceremony, 102-year-old Jesuit Father Ed Flaherty finally got the medals he earned but never received for his World War II military service.

“I was sort of stunned,” Father Flaherty told the Denver Catholic by telephone from St. Louis, Mo. “And also embarrassed. It was a shock.”

On the morning of June 18, U.S. Rep. Ed Perlmutter and retired U.S. Army Maj. Gen. Steven Best showed up to the veteran’s longtime home in north Denver to award him the richly deserved and long overdue medals for his work as a medic in the U.S. Army from 1941 to 1945, including three years in the Pacific Theater. As part of the 131st Engineer Regiment Medical Detachment, he treated fellow soldiers’ wounds and assisted with evacuations.

Major Gen. Best pinned the medals on the centenarian.

“His service in the Pacific Theater of Operations was in places most of us only know about from what we’ve read in the history books, or seen in movies,” he said. “While we are recognizing his service in uniform, what is perhaps even more remarkable is his lifetime of service after he took off his Army uniform, in exchange for another type of ‘uniform.’

“This is indeed a special day for both a servant to his nation in its time of need, and a servant of God.”

Nearly a year before the Dec. 7, 1941, attack on Pearl Harbor that formally launched the United States into World War II, then 22-year-old Edward Flaherty Jr. was doing bookkeeping for his father’s garage in Kansas City, Mo., when he was drafted into the U.S. Army in the first peacetime draft. Bound to a year’s service, he stayed in the military for four years, until World War II ended in 1945.

“I could not conceive of myself killing another human being, so I applied for transfer to the medical detachment,” Father Flaherty recalled. “I chose the medics because I still, of course, had to be in the service to help win the war.”

After his discharge from the Army, he returned home to Kansas City and worked several years for the Folgers coffee company as a bookkeeper and accountant. But he was dissatisfied with the business world.

“I wanted to help people,” he said, adding that with a bachelor’s degree in English and philosophy he felt ill equipped to try to pursue a new career in law or medicine. “In the back of my mind, even in grade school, I thought of being a Catholic priest. Finally, I guess the Holy Spirit took hold of me.”

Educated by Jesuits at Rockhurst High School and Rockhurst College, he had long admired them both as priests and excellent teachers. In 1959, at age 40, he entered the order.

“They just impressed me as good men,” Father Flaherty said. “They were working for God and for people.”

After formation and with newly minted degrees in theology, he was ordained to the priesthood in 1965. He moved to Denver two years later to teach theology at Regis University. In his 54 years of ministry in the Archdiocese of Denver, in addition to working as an educator, he also served as a chaplain — both to the Knights of Columbus and at the former Lowry Air Force Base — and did pastoral ministry.

Until his move just this week from Denver to the Jesuit’s retirement home in St. Louis,  Father Flaherty had continued pastoral ministry to brother priests residing with him at Regis’ Xavier Center and as chaplain to the North Denver Knights of Columbus.

He is getting adjusted to his new home and is still in awe over getting his military medals. A fellow Jesuit had apparently discovered Father Flaherty’s Army discharge papers and reached out to Perlmutter to recognize his military service before the priest left Denver.

“I had never dreamed of that happening,” Father Flaherty said. “I was quite honored in having a major general pin the medals on me. I was as surprised as anybody in the world may have been.”

All photos by Brett Stakelin courtesy of Regis University