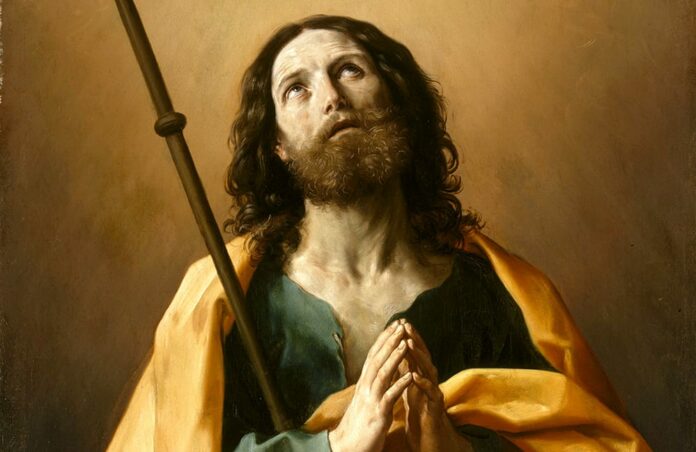 On July 25th, the Church celebrates the Feast of St. James the Apostle, whose journey from fisherman to evangelist should inspire and encourage us all.

Imagine that you are at work sitting at your desk, giving a presentation, or doing some manual labor and a man that you’ve admired and heard about approaches you and says, “Come follow me.” For most of us, taking that step would involve far more trust and willingness to pursue the truth than usual. But this is what James and his brother John did on the day Jesus called out to them as they fixed their fishing nets in their boat. Amazingly, they got up and followed Jesus, even leaving behind their father Zebedee.

Saint James the Apostle is not very familiar to most Catholics, so I am devoting this column to highlight how his example of holiness and authentic discipleship should inspire and encourage us.

What makes James stand out among the 12 apostles is that he, along with his brother John and Peter, were closest to Jesus. Only Peter, James and John were present for the glorious Transfiguration of Jesus, the raising of Jairus’ daughter from the dead, and Jesus’ anguished prayer in the Garden of Gethsemane. These three apostles were allowed to see Christ both in his glory and in his suffering.

Scholars speculate about the many reasons why Jesus chose these three followers to witness those pivotal moments, but it could be that he selected them for a trait they seemed to have in common. Peter, James and John all liked to make strong declarations, only to later realize their weakness and in humility repent.

When Jesus said after the Last Supper that all his apostles would desert him that night, Peter replied, “Though all become deserters because of you, I will never desert you” (Mt. 26:33). Similarly, James and John asked to be seated at Jesus’ right and left hand in heaven, and when he responded that they would have to drink the cup he would drink, they confidently said, “We are able” (Mt. 20:22). James and John also strongly protested a Samaritan town’s refusal to welcome them by asking Jesus if they should call down fire from heaven to consume the town, earning a rebuke from the Lord. It’s no surprise that Jesus gave the two of them the nickname “sons of thunder.”

Saint James’ growth in faith is one that many of us can relate to. We begin our journey with great zeal, strongly declaring our love for Christ and the Church. Then things get difficult and we falter. We realize the truth that we cannot love others — especially our enemies — without God’s constant infusion of grace.

According to tradition, St. James traveled from Jerusalem to Spain in obedience to Jesus’s command to “make disciples of all nations.” After a short time there, he returned to Jerusalem in 44 A.D., where he was beheaded by Herod Agrippa to please the Jewish leaders. The historian Eusebius states that Clement of Alexandria shared an eye-witness account of St. James’ accuser being so moved by his final confession of the faith that he converted and was killed at the same time as James. What previously was a bold declaration for St. James became a reality. Instead of calling down fire upon Herod Agrippa, the son of thunder gave up his life.

His example throughout history has inspired hundreds of thousands of people to go on pilgrimage through Spain, following the Camino de Santiago, or the Way of St. James. After hundreds of miles, they arrive at the Cathedral of St. James, where the remains of the apostle are believed to rest.

His devotion, zeal and humility stand as towering examples of what it means to be an authentic disciple of Jesus. As we join the Church in celebrating his feast, may St. James intercede for us and our efforts to lead others to an encounter with Jesus Christ.