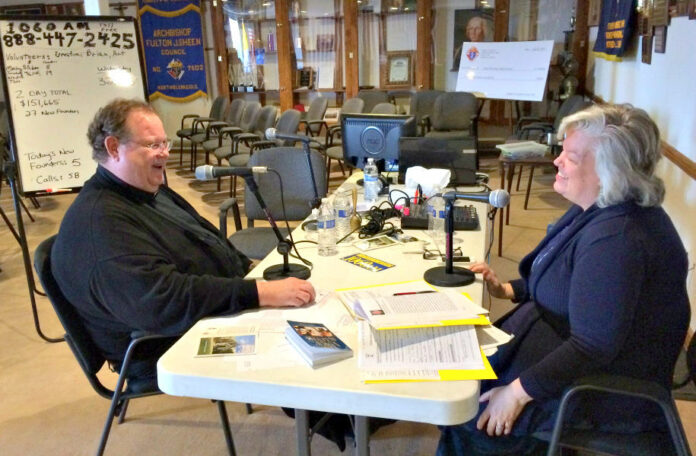 Catholic radio didn’t save Chris Giles’ life, but it may have helped save his soul, he said.

“A few years back I was inspired by the Holy Spirit to give up secular radio for Lent,” Giles shared. He turned off sports talk radio, and hasn’t turned back after listening to the Catholic Radio Network.

“I find I’ve now completely switched over,” said Giles, a parishioner of St. Louis Church in Louisville. “Catholicism is the greatest intellectual endeavor one could hope to undertake … Catholic radio has shown me there’s so much more to being a Catholic than sitting in the pews on Sunday, and I will never be the same.”

Testimonies on the impact of the local Catholic radio station KRCN 1060 have poured into Doug Moberg’s mailbox. As director of development and community relations, Moberg said he helped save the station from closing its doors. He credits the Holy Spirit and donor support for its survival.

Catholic Radio Network then moved from the old KPIO 1570 and now airs on KRCN 1060. The more powerful signal spans beyond the Fort Collins-Greeley area and reaches south past the Denver metro area, Moberg said.

“Without our people supporting the station, we would not be where we are today,” he said.

The station airs EWTN programming, which can be heard on radios across the Front Range and online. In April, KRCN also began to livestream from its website to reach online listeners. Smartphone users can access the station via the Catholic Radio Network application in iTunes.

“The word is getting out there,” Moberg said.

With easier access and expanded reach, he said the station’s goal is to share the truths of the faith with more people.

“It’s teaching the truth and traditions of the Catholic Church,” he said of the station.

As a convert himself, Moberg said he found the station answered his questions about the faith, such as Catholic beliefs on Mary and praying to the saints.

Many non-Catholics—as much as 50 percent—will listen to Catholic radio out of curiosity. Another 25 percent of listeners are fallen-away Catholics, he said, based on national Catholic radio statistics.

The radio station helped lead John Beutler back to the faith. He said he learned more about Catholicism through the airwaves than during his upbringing.

Beutler said he listens to EWTN’s shows including “Catholic Answers Live,” “The Journey Home” and “Mornings with Mother.” Mother Angelica.

Now he often attends Nativity of Our Lord Parish in Broomfield for daily Mass.

All of EWTN’s shows air on KRCN and include local pledge drives. This June, Archbishop Samuel Aquila will show his support by coming onto the station. “I pray the effect of sharing such good news will bring renewed vitality to those who have either been away from the Church or are unaware of the beauty of our faith,” the archbishop wrote in May last year.

Some listeners agree saying the station has drawn their family closer together.

“I love listening to Catholic radio on my commutes to and from work, while picking up the kids from school and driving them to activities,” shared Heather Kenney, who attend Our Lady of the Valley Church in Windsor. “It helps unify our family and open up lines of discussion about our faith. I love Catholic Radio, (and) will continue to pray that the Gospel is heard and spread over the airwaves.”