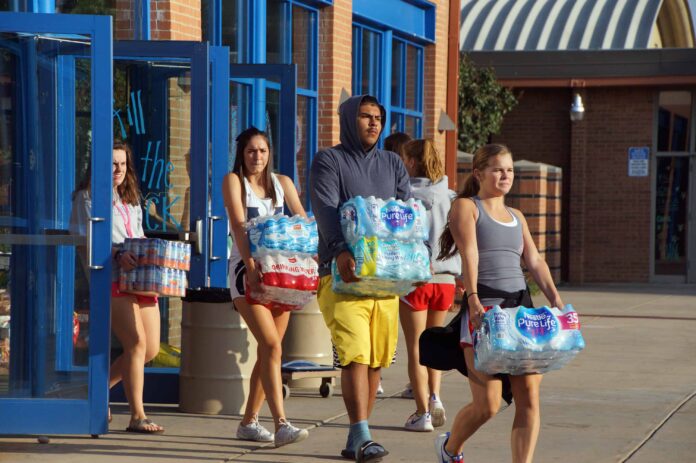 At what would have been an ordinary high-intensity rivalry game, the schools decided to come together for a relief initiative after Mullen cheer coach, Demi Zimmermann, organized a drive at the school during the week leading up to the Friday game.

“Mullen Cheer head coach, Demi Zimmerman, who recently relocated from the Texas area, initiated the drive by organizing the transportation of a semi-truck to the Houston area…students [rallied] together to donate essential items and fielded endless phone calls from the community who were all anxious to help. Saturday morning, a full semi-truck [left] the Mullen campus for Houston,” said respective presidents of Mullen and Regis, Carl Unrein and David Card, in a joint statement.

“This week, we collected donations for those affected by the hurricane. Seeing everything Mullen students brought to donate made me proud of what our community could accomplish,” said Mullen junior student, Mike Woodhouse, who is part of the student council.

Zimmermann and her husband grew up just outside of Houston and said most of her family and friends still reside there. When she saw the devastation of Harvey, she was “heartbroken.”

“Many of our friends, family members, and co-workers lost everything. Some of them still have not been allowed to enter or get back to their homes due to stagnant and high levels of water that are present today,” Zimmermann said. “Rivalry or not, it’s important that our community recognizes that people should help people.”

Leading up to the football game, Regis also collected nearly $9,000 in support of displaced families from two Jesuit high schools in Houston and continue to collect funds.

“We are called to be brothers and sisters in Christ, and part of that is supporting each other when things are not going well,” said senior Regis student, Olivia Marie Ary. “These hurricanes have been devastating, and people in the southern part of our country are going to need lots of help and resources to get back on their feet as quickly as possible.”

“[Having a drive] not only creates a feeling of support for those directly affected by the hurricane, but it also aids in a feeling of community and brotherhood,” said Mullen senior student Marguerite Whiteside, a student council vice president of service. “By coming together as a school, and community, we were able to support those in distress. The fact that the drive occurred during a rivalry football game is powerful. It goes to show that, yes we are rivals, but we are all humans who have the basic understanding of common good.”

“Our rivalry melts away when heeding the call of our shared Catholic faith and serving those in need,” they stated.