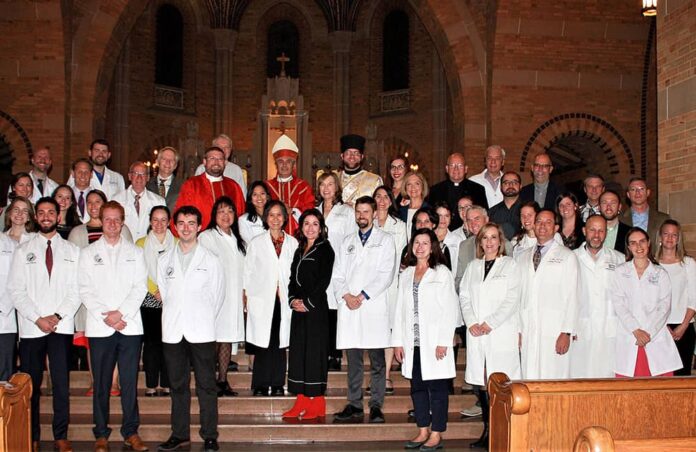 Mass will be followed by a dinner and a speaker, Sister Mary Diana Dregar, MD, Dominican Sister and Physician. The White Mass is an opportunity for Catholic Healthcare Providers to join in celebration and renewal of their professional oaths guided by the wisdom and moral teachings of the Church. It is open to the public, but Catholic health care professionals, including mental health workers, are especially invited to attend. To register and RSVP, go to www.Denver-CMA.com. The cost is $10 (for dinner) and students are free. The event is sponsored by Centura Health.

The tradition of the White Mass in the United States finds its origins in the development of the national Catholic Medical Association in the early 1930s. From its inception, the medical profession has been understood as a healing profession, a way in which Christ’s work continues upon the earth. Moreover, since the apparitions at Lourdes in the late 19th century, the plight of the infirmed — and those who care for them — have taken on renewed appreciation in participating in the mysteries of Christ’s own life. The White Mass, so named by the color worn by those in the healing profession of medicine, gathers health care professionals under the patronage of St. Luke to ask God’s blessing upon the patient, doctor, nurse, and caregiver alike.

Following the White Mass, Sister Mary Diana Dreger will be speaking on the “Reflections on Being a Catholic Physician: Model of the Church’s Social Teaching for Healthcare Professionals.”  Sister is a member of the Dominican Sisters of the Congregation of St. Cecilia in Nashville, Tennessee, as well as a practicing internal medicine physician.

Since 2007, she has worked with The Holy Family Health Center, an affiliate of Saint Thomas Medical Partners. In addition to caring for her patients who are predominantly uninsured immigrants, as the only physician on-site, she supervises nurse practitioners and participates actively in the management of the clinic and formation of the staff.

She graduated from Vanderbilt Medical School in 2001, and completed her residency in internal medicine at Vanderbilt University Medical Center in 2004. She holds a faculty appointment with Vanderbilt as an Assistant Clinical Professor of Medicine in the Department of Medicine, Division of General Internal Medicine and Public Health. In this role she is a preceptor with medical students for rotations in primary care and supervises internal medicine residents in their continuity clinic at Holy Family.

Sister Mary Diana has become proficient in Spanish in order to serve the largely Hispanic population of the clinic, where the staff, providers, and students are all bilingual. Sister is board-certified with the American Board of Internal Medicine and is a Fellow of the American College of Physicians.

She has been a member of the Dominicans for over 25 years. Before entering the community, she was a biology major at Cornell University, and then completed her degree at the State University of New York at Stony Brook with a concentration in secondary education. She completed Master of Arts in Mathematics at Stony Brook in 1987. Sister then taught at the high school and college levels, before discerning her vocation to religious life.

In Nashville, she has also been involved in administration at Saint Cecilia Academy, and was a member of the Aquinas College Board of Directors. She is currently working toward completion of a Master of Arts in moral theology with Holy Apostles College and Seminary in Cromwell, Connecticut.

Sister became an active participant in the Catholic Medical Association (CMA) in 2006. She was a founding member of the Nashville Guild of the CMA in 2008 and has served as an officer for the local guild for six years. She became an advisor to the president and a member of the board of directors of the CMA at the national level in 2014, and serves as chair of the Linacre Quarterly Committee, providing strategic oversight for the official journal of the CMA.

She is a member of the national CMA speaker’s bureau, and has presented over 100 talks across the country and in Canada on topics related to education, medicine, faith, and ethics to high school, college, parish, clergy, and medical audiences. She has presented twice at the Annual Educational Conference of the CMA on topics related to the faithful practice of the Catholic physician, was invited to speak twice to the Christian Community Health Fellowship national meeting, and has spoken at several secular medical meetings including for the Program in Professionalism and Ethics at Mayo Clinic in Rochester, Minnesota. She completed the National Catholic Bioethics Center certification program with distinction in 2011, and her paper “Autonomy Trumps All” was published in 2012 by the National Catholic Bioethics Quarterly.

For more information on the White Mass event, contact DenverCMA@gmail.com.