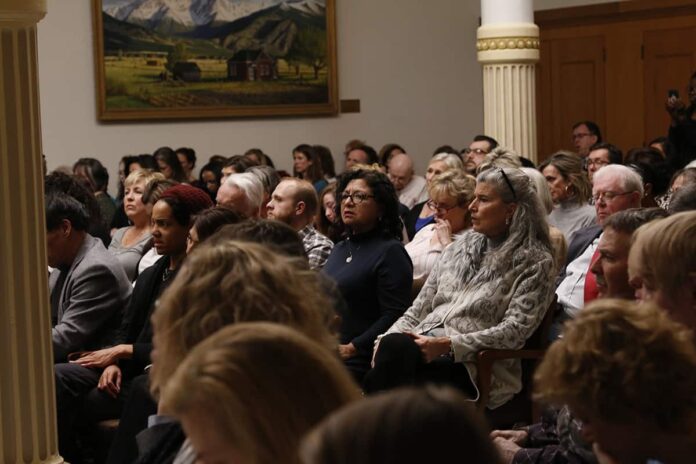 After roughly 10 hours of debate and over 300 public testimonies, a Colorado House committee voted 7-4 to approve a controversial sexual education bill Wednesday. The bill now moves to the House Appropriations committee.

Several overflow rooms were needed at the Colorado State Capitol on Jan. 30 to seat the hundreds of people who showed up to voice their opinion on House Bill 19-1032.

The bill would require public and charter schools that choose to teach a sexual education curriculum to follow certain “comprehensive sex-ed” regulations, some of which include teaching that abstinence is equal to “safe sex”; if pregnancy outcome options are taught, then abortion, adoption and parenting must all be presented without bias; and the content must promote “sexual activity, sexuality, and sexual orientation as a normal part of human development.”

Among those present in opposition were parents and people of faith, many who waited hours for their turn to speak.

“This [bill] specifically undermines the rights of parents because there’s a section of the bill that says that teachers may discuss gender sexuality outside the curriculum,” said Kelsey Buckingham, a nurse and mother of a child in public school and parishioner at St. Joseph’s Parish in Golden. “So even though the bulk of the curriculum allows parental consent, it puts a loophole in that allows for teacher to have these conversations with my child without my consent.”

In the midst of the waves of people that waited to testify, parents of homeschooled children and those with children in Catholic schools made their voices heard too, declaring that the bill would also affect them.

“Even though we homeschool, we have friends that go to public schools and they’re going to have conversations with [my children] that I don’t want them to have because of this bill, if it gets passed. It’s robbing children of their innocence,” said Stephanie Kelley, mother of five children whom she homeschools and parishioner at Holy Name in Sheridan. “This bill [also affects all parents by] removing our God-given right to parent our children as we see fit. Please let parents be parents and kids be kids. Do not put tools that can harm our children in their hands before they can handle it…”

The bill has been opposed by the Colorado Catholic Conference and the Archdiocese of Denver.

“[The bill] would require public and charter schools to either use a comprehensive sex-ed curriculum that contradicts human nature and is inconsistent with Christian values, or to provide no instruction on sexuality at all,” Archbishop of Denver Samuel J. Aquila said in a letter written to all the faithful of the archdiocese. “We know that God made us male and female, in his image and likeness, but the comprehensive curriculum route which most schools will likely adopt teaches innocent children this is not true.”

Also testifying Wednesday night was Father Daniel Nolan, vicar at Our Lady of Mount Carmel Church in Littleton. His comments on human sexuality were challenged by Rep. Brianna Titone, who asked him: “As a Catholic priest, are you abstaining from sex?”

A reaction of disapproval spurted from most of the audience, but Father Nolan humorously replied: “Well, I am a handsome man.”

The priest calmly responded, “I hear confessions,” which was followed by an outburst of claps from the audience that the Madame chair was forced to silence.

Rep. Mark Bailey — who publicly opposed the bill and called it “a violation of the First Amendment” for its suppression of religion in school districts —argued that the phrase “healthy relationships” had problematic outcomes for parents: “This is what it really is about: for parents to have the right to define for their children what a ‘healthy sexual relationship’ is… Is this our role as a state to determine what a healthy sexual relationship is rather than allow parents to define that for their kids?”

In a similar statement, Stephanie Currie, representative of Family Policy Alliance, said: “Parents, not the state, have the inalienable, constitutional rights for the moral upbringing of their children. This means parents have the right to define the inner boundaries of what they call sane and healthy relationships.”

Moreover, other parents and religious leaders testified that the bill pushed gender ideology at the expense of religious beliefs or traditional values.

“Unelected Colorado State entities have already demonstrated animosity toward people of faith and in views about marriage and sexuality,” said Jeff Johnson, a father of children in charter school. “This bill is trying to inculcate students into [specific] ideological beliefs about sexuality and relationships. This ideology is not rooted in science… Sexual orientation and gender identity are not measurable discrete scientific realities. They are moldered social constructs, and that is what this bill is forcing on local communities.”

Even though many opponents of the bill were saddened to see its approval despite the great opposition, they’re resolved to continue fighting as the bill still needs approval by the full House and then also the State Senate.

“It was an impressive turnout. It was unbelievable seeing the people that came out in opposition to this,” Buckingham concluded. “I just hope the legislators are giving weight to the fact that so many people are voicing concern. I hope they can keep that in mind, that they’re representing the public.”

*If pregnancy outcomes are covered, abortion and life must be presented as equal options.

*“Healthy relationships” are defined by the state, not by parents.

*Creates a loophole where programming on gender, gender expression and sexual orientation can be taught outside of the human sexuality instruction without notification provided to parents.

*Charter schools may not apply for a waiver.