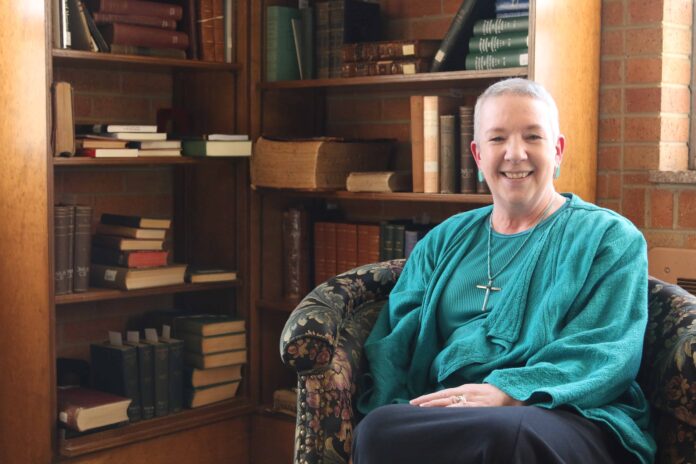 Lyn Cotton and her fellow staff members at the Cardinal Stafford Theological Library will never forget the summer the library’s smoke alarm went off.

Perhaps it was the cause of the alarm that etched the incident into their memories. As it turns out, seminarians at St. John Vianney Theological Seminary were dusting the books and shelves in the library basement, said Cotton.

“They raised such a cloud of dust that the smoke alarms went off,” she said, cracking a smile.

Cotton, a library assistant at Cardinal Stafford, has truly seen it all.

And although she will retire in May — just one month before her 20th anniversary at the library — her dedication will continue as she serves as a weekly volunteer.

“The fact that she wants to come back says a lot about the kind of place that we are, but also the kind of person she is,” said librarian Tamara Conley.

“Some people would close the door and get out of here,” she added. “They wouldn’t want to see it again. [Cotton] cares about this place, and she cares about the people here.”

Library director Stephen Sweeney is grateful for Cotton’s service and looks forward to the next 20 in her volunteer capacity.

“The library has an amazing, dedicated staff that work to serve the needs of the seminary community while being available to the larger archdiocesan community and the public who find us,” said Sweeney.

“Lyn has been here at the library since before St. John Vianney Theological Seminary was instituted in 1999, which gives her a unique perspective on our history,” he added.

For Conley, working with someone as loyal as Cotton is an immense help.

“The continuity is amazing,” she said. “To know that she’s seen things from the beginning projects to end is really, really beneficial for us. You can’t put a price on that.”

Many features of the library have kept Cotton coming back each year.

“The place itself is just gorgeous,” said Cotton. “The library is the gem of the seminary and the chapel is the jewel.”

Cotton is a member of the Protestant Church, which has made working at a Catholic library unique, she said.

“I really didn’t know much about Catholics when I started,” she said. “I’ve learned a lot about the Catholic faith.”

Between the library’s faith-based atmosphere and the people she works with, Cotton has always found that the positive experiences outweigh the challenges she’s faced over the years.

“I first came in as a part time archivist,” said Cotton. “At that time when I first got here, we had one computer.”

Besides the technological advancements that have occurred since 1998, Cotton has also taken on a variety of roles at the library.

She has experience working with archives, cataloguing, and managing volunteers who come in each week to help with a multitude of tasks.

“She sits quietly in the back and holds everything together,” she said. “She does a million things. I couldn’t even tell you all the small things she does.”

Through it all, Cotton has built a relationship with the seminarians who pass through the library’s doors each day.

Some of them come back years down the road to say “hello,” and others end up working at the seminary, she said.

“That is really fun to have them go all the way through and then come back to us and help out,” said Cotton.

“I don’t know the ones now as well as I didn’t when we first began because there were a lot fewer then,” she added. “But they’re all very polite and good guys.”

For Conley, the thing that makes the Cardinal Stafford Theological Library special is also what might inspire someone like Cotton to volunteer after retirement.

“I think the sense of community that we have here — all bonded by a love for Christ — is what keeps people coming back,” she said.

Cotton admits she’ll continue to look forward to coming to the library as a volunteer each week.

“I’ve just had so much fun,” she said. “It’s just been a pleasant, holy place to work.”