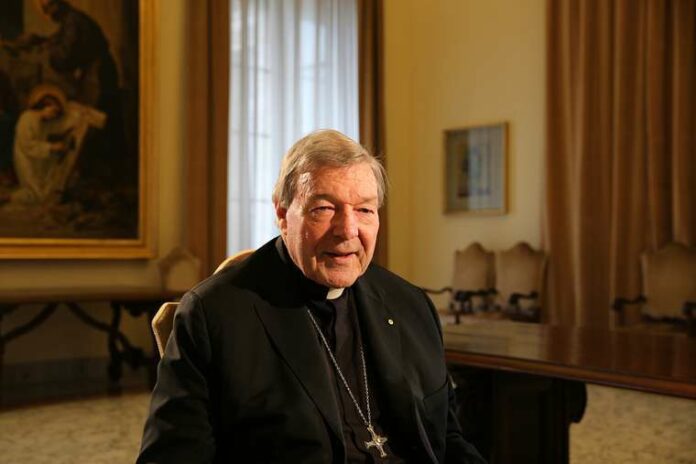 Fifteen months ago, it looked as if Cardinal George Pell might spend his 80th birthday in prison. A malicious trolling expedition by the police department of the State of Victoria in his native Australia had led to the cardinal’s indictment on manifestly absurd charges of “historic sexual abuse.” His first trial ended with a hung jury heavily in favor of acquittal; but because of a court-imposed media blackout on the trial, the public did not know that the defense had shredded the prosecution’s case by demonstrating that the alleged crimes couldn’t have happened how, when, and where the complainant said they’d happened. The cardinal’s retrial ended in an incomprehensible conviction, which was followed by an even more incomprehensible (and feckless) rejection of the cardinal’s appeal. Happily – for the sake of an innocent man’s liberty and the reputation of Australia’s justice system – the country’s High Court unanimously quashed the guilty verdict on April 7, 2020, and entered a judgment of “innocent” in the case of Pell v. The Queen.

Cardinal Pell did not waste his 404 days in prison, most of them in solitary confinement. He wrote a daily journal that has become something of a modern spiritual classic; Ignatius Press has been publishing it in three volumes, the last of which will appear in October. Through his Prison Journal, thousands of people around the world have discovered the real George Pell: a man of rock-solid faith, keen intelligence, deep compassion for the confusions that beset the human race, and a determination to live out the priestly ministry to which he committed himself when he was ordained by Cardinal Gregory Peter Agagianian (runner-up to John XXIII in the conclave of 1958) on December 16, 1966.

I’m happy that so many others have now discovered the truth about this good and great man, not least because he and I have been friends since he spent his post-ordination summer in my Baltimore parish, in between his Roman theological studies and his doctoral work at Oxford. Over that half-century, we’ve discussed just about everything. And while the cardinal has not converted me to the virtues of cricket, we are of one mind on so many other things that we’ve worked in close harness on several occasions.

Thus it strikes me as providential that Cardinal Pell’s 80th birthday falls while the universal Church is being roiled by the German “Synodal Way: a process that, absent a decisive Roman intervention (and perhaps even in the face of that), seems likely to confirm that institutional Catholicism in Germany is in a state of apostasy. Providential, because without George Pell’s leadership as archbishop of Melbourne and then cardinal archbishop of Sydney, Australia might well have become the kind of ecclesiastical disaster area Germany is today – although the Aussies would have gotten there 25 years earlier.

His enemies will never admit it, but Cardinal George Pell saved the Church in Australia from dissolving into a Liquid Catholicism indistinguishable from Liberal Protestantism. He did so by his defense of Vatican II as renewal within tradition; by his reform of the priesthood and his care for sexual abuse victims in the dioceses he led; by his unwavering support of Catholic orthodoxy in the teeth of fierce cultural headwinds that cowed many of his brother bishops; by championing serious Catholic intellectual life in a variety of initiatives; and by hosting Sydney’s World Youth Day-2008, which evangelically energized young Australian Catholics as Denver’s World Youth Day-1993 had done for young American Catholics. Without George Pell’s leadership and his willingness to stand for the truth against vicious criticism, Catholicism Down Under in 2021 might well look like the moribund Church in much of Germany today, but absent the Germans’ vast, tax-supported wealth.

Cardinal Pell’s work to clean the Augean stables of Vatican finance remains to be completed and questions about possible links between that work and his prosecution remain to be answered. Nonetheless, the cardinal’s grace under extraordinary pressure and the dignity with which he conducted himself before, during, and after his imprisonment have made him one of the most influential elders in the Catholic Church today. That he lost his vote in a future conclave on June 8 does not mean that he will be sidelined in the really consequential discussions of the Church’s future. He will be very much at the center of those conversations, now wielding the moral authority he has rightly won as a contemporary confessor.

The man I have known and cherished since the summer of 1967 was not built for quiescence. His voice will be heard. And it will be heard where it counts.