Cardinal Burke, Archbishop Aquila call Catholic laity and clergy to be ‘faithful echoes’ of the Church 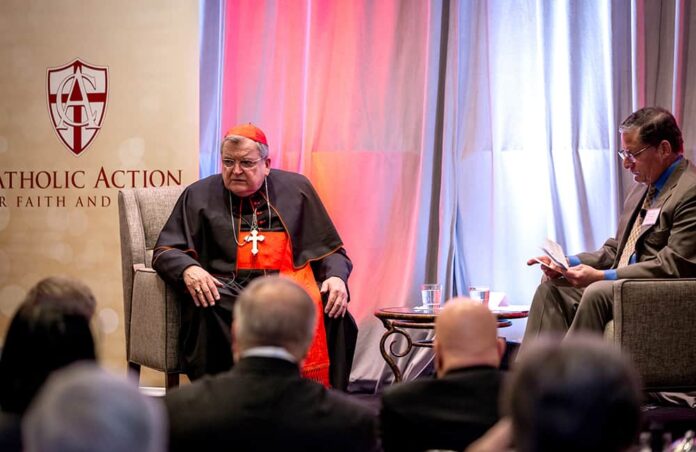 Last week the Archdiocese of Denver served as a launch-pad for a movement to rally Catholic laity and clergy in rekindling their zeal for holiness and evangelization in response to the controversies and abuse crisis dominating media headlines about the Church.

“The Faithful Echo movement … is directed to drawing clergy and the lay faithful in ever closer unity to combat the darkness of the present confusion, error and division in the Church,” Cardinal Raymond Burke told more than 200 laity and priests attending the Faithful Echo Dinner Oct. 31 at the Grand Hyatt in downtown Denver. “[We] are all called to recognize the purity and beauty of the doctrine and discipline of the Church and to work together as living members of the mystical body of Christ, to safeguard and defend our Catholic faith.

“All of us … are called to be a faithful echo. A faithful witness of Our Lord in the world.”

Cardinal Burke is a member and prefect emeritus of the Apostolic Signatura, the highest judicial authority of the Church. He keynoted the dinner, which followed a three-day priest conference attended by 80 clerics. The conference included talks by Cardinal Burke, by Cardinal Gerhard Muller, prefect emeritus of the Congregation for the Doctrine of the Faith, by Father John Trigilio, president of the Confraternity of the Catholic Clergy, and by Curtis Martin, founder and CEO of the Fellowship of Catholic University Students. Cardinal Burke also addressed Denver’s seminarians. Dr. Gianna Emanuela Molla, daughter of St. Gianna Beretta Molla for whom the saint gave her life, was a special guest of the dinner and conference.

The events were co-sponsored by Catholic Action for Faith and Family, the Napa Institute, the Confraternity of Catholic Clergy and the Archdiocese of Denver.

In today’s climate of rampant relativism, it is critical for Catholics to faithfully carry out the Church’s mission, which is to give witness to the truth of Jesus Christ and the Gospels by word and action — to evangelize, Archbishop Samuel J. Aquila said, addressing the dinner guests.

“We have the same mission the apostles had in the early Church when they were commissioned to go out and make disciples of all nations and to teach them all that the Lord has taught,” he said.

Thomas McKenna, president of Catholic Action for Faith and Family, served as emcee for the dinner.

“The response God always gives to a suffering Church is the holy people who are striving to be saints,” McKenna said in his opening comments, quoting a Denver seminarian whose remarks McKenna asserted capture the spirit of the Faithful Echo campaign. “The challenge is for [the] laity to become saints and [for the] clergy to become saints. With that we will overcome this crisis we’re experiencing today.”

McKenna said the seminarian, Deacon Christian Mast, was speaking to youths and young adults following the recent release of the independent review by the Colorado Attorney General’s Office of the Denver, Colorado Springs and Pueblo dioceses on clergy sex abuse going back to 1950.

Father Trigilio, who is also an author, EWTN personality and director of pastoral formation at Mount St. Mary’s Seminary in Emmitsburg, Md., affirmed those remarks.

“We want holy priests, we demand holy priests at the seminary, and we want holy faithful. Because that’s what our faith is about — the sanctification of souls,” he said. “And it’s a team effort [of] the mystical body of Christ.”
After last year’s grand jury report on clergy sex abuse going back 70 years in six Pennsylvania dioceses, Mount St. Mary’s expected a drop in seminary enrollment, Father Trigilio said. The opposite occurred as men of all ages enrolled.

“Lots of young, middle-aged, older men with zeal,” Father Trigilio said. “They were afraid that if they didn’t step up to the plate, who would take their place?

All of us … are called to be a faithful echo. A faithful witness of Our Lord in the world.”
– Cardinal Raymond Burke

Cardinal Burke described the crisis in the Church today as one of “general confusion and error,” likening it to the fourth-century Arian heresy, which denied the divinity of Christ.

“Without doubt the Church is presently experiencing one of the most serious crises she has ever known,” he said. “There is a strong perception that Rome herself is no longer secure and firm.”

To confront the gravity of the situation, on May 31 Cardinal Burke was among a group of cardinals and bishops to sign an eight-page “Declaration of Truths” reaffirming Church teachings in response to confusion that has occurred under the current pontiff.

“With the help of Divine grace,” he added, “let us go forth, let us fight the good fight, let us stay the course, let us keep the faith.”