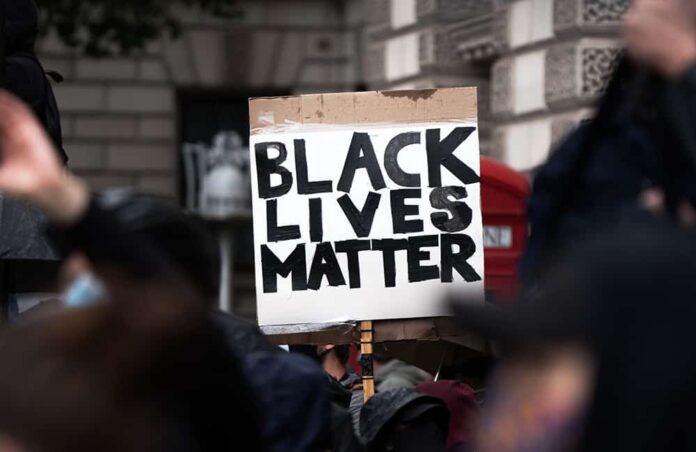 Catholic leaders say the Church has an important role in working for racial justice, but that protesting for justice does not imply endorsement of the positions taken by Black Lives Matter organizations.

The phrase “#BlackLivesMatter” began to trend online following the death of Trayvon Martin in 2012, and a movement grew amid protests and riots in Ferguson, Missouri in 2014 after the shooting of a young black man, Michael Brown, by a police officer.

“Black Lives Matter” has become the rallying cry for a broad social movement. But there are also specific organizations which take the name “Black Lives Matter.” The largest and best-funded of those groups is the Black Lives Matter Global Network Foundation, which has a network of local chapters around the U.S. and in other countries, and operates the website blacklivesmatter.com.

“We foster a queer‐affirming network. When we gather, we do so with the intention of freeing ourselves from the tight grip of heteronormative thinking,” the group’s website says.

At least one Black Lives Matter network affiliate has incorporated spiritual rituals into protests, drawing from animistic religions by calling forth deceased ancestors and pouring out libations for them. The leaders of Black Lives Matter-Los Angeles say their efforts are more than a movement for racial justice, but are a “spiritual movement.”

Other organizations also use the phrase “Black Lives Matter,” some with different agendas and goals than the global network. But the Black Lives Matter Global Network Foundation is often correlated directly with the movement itself, and its affiliates often organize local protests.

The organization should be distinguished from the broader social movement for racial justice, said Deacon Harold Burke-Sivers, a black Catholic deacon of the Diocese of Portland, Oregon, author, and co-host of EWTN’s Morning Glory radio show.

“Marching to protest the inequitable treatment of black people by those in authority—that’s good,” the deacon said.

However, the policies espoused by the Black Lives Matter organization on family and sexuality constitute “a radical feminist agenda disguised as a movement for ‘Black Lives Matter,’” he said.

“No Catholic can support the national organization, whatsoever,” he added.

Burke-Sivers encouraged Catholics to act for racial justice, but to pray first.

“Take the life that God has given us in these sacraments, and become the heads and the hands and the face and the heart of Jesus in the world,” he said. “Start with that and then put that into action.”

Saying “Black Lives Matter” is important, EWTN radio host Gloria Purvis, who is African-American, told CNA. She added that neither the phrase nor the movement should be viewed through the lens of only one organization.

“It’s a mistake to say that Black Lives Matter—the organization—is the head of this movement.”

“That’s like saying that one organization is the head of the pro-life movement,” she explained.

The phrase “Black Lives Matter” represents a whole “movement for racial justice,” she said, one which is now global and without one single leader. Using the phrase “doesn’t mean you are now de facto a member of this organization,” she said.

“For me, as a Catholic, a devout Catholic, as a loyal daughter of the Church, I have no problem saying ‘Black Lives Matter,’” she said.

“I know it doesn’t make me a member of the organization.”

Some Catholics hesitate to attend protests or other events because they say that not only “black lives matter,” but that “all lives matter,” she noted.

Purvis explained that the phrase “Black Lives Matter” is not meant to devalue the lives of others, and while all lives do matter, she has observed that “in practice” in the U.S., “what we’ve seen is that black lives don’t.”

As a pro-life Catholic, Purvis said she recognizes the eugenist roots of abortion, but said fighting racism in America shouldn’t be limited to opposing abortion. She said racism is manifested through police misconduct, housing policies, and other aspects of American public life.

Ryan Bomberger, a black pro-life activist and co-founder of the Radiance Foundation, says he does not support the Black Lives Matter movement, because of its hostility to Christianity.

“Every life unjustly killed deserves justice. The question is, how do we pursue that justice? And for me, as a Christian, I cannot embrace a secular movement that is unapologetically hostile to Christianity, in order to pursue justice,” Bomberger told CNA.

While “a lot of people involved” with the movement are acting “out of compassion and love,” he said, “the ones leading are very clear about the objectives of the movement,” Bomberger said.

“It’s the entirety of that manifesto that doesn’t make any attempt to be Biblical in any sense,” he said. “They’re not looking for forgiveness or reconciliation, they’re looking for political power.”

On the relationship of Christians to the Black Lives Matter movement, he said that “my issue is that the church should be leading, instead of sheepishly following a broken secular movement.”

For his part, Bishop Shelton Fabre, chair of the U.S. bishops’ committee on racism, told CNA that Catholics should join efforts to call for racial justice.

“Black Lives Matter has a broad agenda covering many social issues, some of which are not in harmony with Catholic teaching. However, on the issue of standing against the injustice of racism, it is my understanding that Catholic Social teaching and Black Lives Matter are in accord,” the bishop said.

“Because we have a responsibility to bring our faith to the public square, it is appropriate to protest racial injustice,” he added.

In recent weeks, mass protests have occurred in dozens of cities across the country following the death of George Floyd, a 46 year-old black man in Minneapolis.

In some cities there have also been riots, and a section of Seattle has been declared an “occupied protest.”

Amid the weeks of protest, both the Black Lives Matter movement and organization have gained increased national attention.

Now-retired Bishop Edward Braxton of Belleville, who is African-American, wrote a 2016 pastoral letter on the Catholic Church and the Black Lives Matter movement.

In that letter, Braxton said the Black Lives Matter movement doesn’t have one leader or organizer.

“The phrase is more a call to action against racial profiling, police brutality, and racial injustice than a specific organization. The media and the public often associate a variety of unconnected groups with Black Lives Matter, when they are actually not structurally connected,” the bishop noted.

However, Braxton noted that most leaders in the Black Lives Matter movement he had encountered reject the Church’s teaching on sexuality, marriage and abortion.

Others in the movement, he said, are reluctant to work with the Church because they think Catholics have not done enough to fight racism, he wrote.

Braxton wrote that there are “profound differences” between the teachings of the Church and the Black Lives Matter movement, and that many leaders in that movement do “not embrace traditional Christian theological ideas about praying to keep the peace and change hearts.”

“They embrace a radical theology of inclusion inspired by a revolutionary Jesus,” he wrote.

Do differences “necessarily mean that a representative of the Church cannot have a meaningful conversation with representatives of the movement about these and other issues where there may be greater accord?” the bishop asked.

Braxton wrote that his dialogue with members of the movement had allowed him to present Church teaching on poverty and race, as well as on marriage, sexuality, and human dignity.

The bishop said that in dialogue, he “explained that the Church’s social doctrine may be more forceful than they think. I also pointed out that Catholic beliefs about the nature of marriage, the meaning of human sexuality, and the dignity of human life from conception to natural death are not mere cultural norms or social issues. The Church cannot and will not change these moral doctrines. These beliefs represent what the Church firmly holds to be fundamental moral principles rooted in human nature, natural law, biblical revelation and the teachings of Jesus Christ.”

Braxton wrote that all Catholics have an obligation to work for racial justice in the framework of Catholic teaching about the dignity of the human person, and the sanctity of human life, and to work, above all, for conversion.

“The Church has a grave responsibility to contribute to the ongoing conversion and spiritual transformation of us all. Working tirelessly day by day, we are co-workers with Christ.”

Amid the ongoing protests, Bishop Fabre encouraged Catholics to take seriously the unique role they can play in promoting an end to racism.

The present moment, Fabre said, presents an “extraordinary opportunity” with many Americans taking an active part in protests against racism and police brutality. However, he said, the work still remains to be done “to dismantle racism.”

“We should be seeking what unique role God might be asking the Catholic Church to play in transforming opportunity into a watershed moment in eradicating racism,” he said.

African-American Catholics have suffered from racism within the Church for “decades and centuries,” he said; sometimes it has taken the form of “parishes not welcoming the ministry of a black priest or deacon,” he said, “or parishioners not wanting to receive the Eucharist from an African-American extraordinary minister of holy communion.”

Black Catholics “long for the eradication of racism in the Church through encounter, accompaniment, repentance, justice, action, charity, and prayer,” he said.