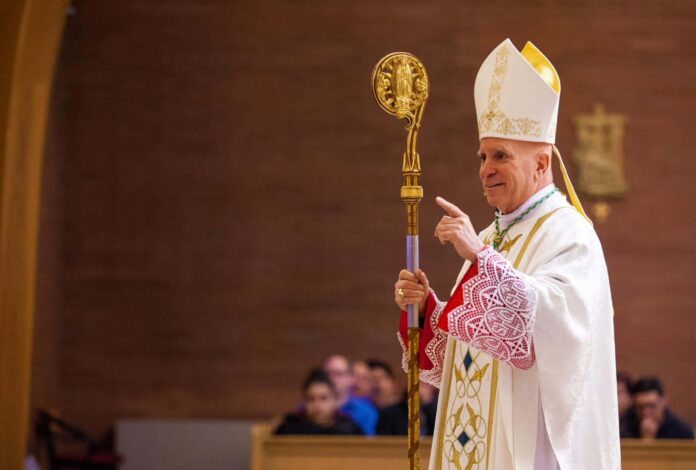 The challenges of leading an archdiocese are many, and complex. But for Archbishop Aquila, the solution begins and ends with prayer, and bringing people into friendship with Christ.

It’s been five years since Archbishop Aquila was installed as the eighth bishop of Denver, on July 18, 2012, which brought him back to the archdiocese after having served 10 years as the Bishop of Fargo, North Dakota. He was ordained a priest of the Archdiocese of Denver in 1976.

In this interview with Denver Catholic, the archbishop reflects on the highlights of the past five years, as well as some top priorities for the archdiocese in the years to come.

Denver Catholic: On July 18, you marked five years as the Archbishop of Denver, what have been some highlights of these past years?

Archbishop Aquila: Since my arrival from the Fargo Diocese in 2012, there have been many inspiring moments, and I will mention here a few that have stood out. The first that comes to mind is the support and warmth that I experienced from the people when I was called by the Holy Father to shepherd this archdiocese. I never expected to return to the diocese I was ordained for, so it was a great blessing to receive that gift from the Lord. The appointment of Bishop Rodriguez as our auxiliary bishop this past year is another highlight. His pastoral heart and intellect are gifts for our archdiocese, particularly for the Hispanic community.

The opening of the Cause for the Canonization of Julia Greeley is certainly a highlight as well, given the fact that her cause is the first in the history of our archdiocese and that it has been so enthusiastically welcomed.

In the political arena, the defeat of the Colorado Senate Bill 175, which would have enshrined “the right to abortion” in our state law, was a great victory. It was encouraging to see the impact that people of faith can have on the political process, and to see the Church publicly standing for the truth that all life is sacred. Along those same lines, it was good to see so many Catholics speaking out against the legalization of assisted suicide. Even though it was approved, the Church was faithful in striving to defend life at every stage.

On the formation front, the archdiocese has made some significant gains. In 2016, our ministry center for Hispanics, Centro San Juan Diego, helped form 28,000 people in catechetical and leadership skills. The Catholic Biblical and Catechetical Schools also were able to increase their reach in our parishes, boosting their enrollment by 50 percent. This past Spring we had record numbers of middle schoolers attend our Mountain Madness retreat and the annual Steubenville of the Rockies retreat sold out as well. It’s also important to mention the upcoming opening of Frassati Catholic Academy in Thornton this next academic year and the increased interest in classical Catholic education evident in places like Our Lady of Lourdes School.

Finally, we have been blessed to have a total of 35 men ordained to the priesthood and 36 men ordained to the permanent deaconate over these five years. I could go on with countless other highlights, such as the parish visits I have made, the restoration of the Sacraments of Initiation, the call to living out authentic discipleship, the beginnings of two new parishes, and many other things.

DC: As you look toward the future of the Archdiocese of Denver, what do you hope to see develop, especially in the area of evangelization?

Archbishop Aquila: The Archdiocese of Denver has been experiencing an influx of people for some time as part of the larger demographic population shift to the southern and western parts of our country. Unfortunately, despite the increase in population, church attendance statistics in the archdiocese are nearly flat. We are fortunate that we have many praiseworthy apostolates and committed Catholics in our archdiocese working to reverse this trend, which is affecting nearly all Western societies. Beginning with Blessed Paul VI, our popes have been calling for efforts to evangelize that are new in “ardor, methods and expression” (Evangelii Nuntiandi, 14). I hope that in the coming years we will see better and greater efforts to bring the Gospel to people in ways that answer the profound loneliness and isolation they are experiencing. This should begin with establishing authentic friendships that can eventually lead them to conversion. The spiritual poverty of so many in our society can only be answered by restoring them to friendship with Christ. Pope Francis, too, has called us to a greater outreach to the peripheries and to the poor as a part of evangelization. We are opening a new shelter for homeless women in Denver and have developed new low income housing in Greeley, as well as increasing our outreach to the Hispanics, who now make up over 52% of our archdiocesan Church. All of these initiatives are efforts towards evangelization.

DC: You just led an 18-member delegation to the Convocation for Catholic Leaders in Orlando at the beginning of July. Tell us about the convocation and the experience you had with the delegation.

Archbishop Aquila: The Joy of the Gospel Convocation was designed to allow the Church in the United States to discuss how it can apply Pope Francis’ apostolic exhortation on evangelization, Evangelii Gaudium. Gathering with over 150 bishops and 3,500 Catholics from throughout our country to worship together and share our common faith was a unifying experience. It was also uplifting to see so many people and apostolates working to answer the challenges the Church is experiencing. I was impressed with the number of young people present and the powerful witness talks presented by the faithful whose encounter with Jesus Christ changed their lives. Our delegation was able to have a fruitful discussion on our local challenges and I am excited to integrate some of the ideas that were mentioned into our archdiocesan plans.

DC: Next year we will mark 25 years since the celebration of World Youth Day in Denver, and the visit of Saint John Paul II. Why is this event so important to the archdiocese, and to the legacy of John Paul II?

Archbishop Aquila: The visit of St. John Paul II to Denver was a pivotal moment for the Church in the U.S. and particularly for our archdiocese. While the Holy Father had been talking about the “new evangelization” for some time, it wasn’t until his visit for World Youth Day in 1993 that the spiritual momentum seemed to reach a turning point. Then-Archbishop Stafford had great courage in bringing WYD to Denver. None of us knew the impact it would have. After the Pope’s visit, the Church witnessed a wave of “John Paul II” priestly and religious vocations, young people answering the call to pursue holy marriages and the birth of many apostolates dedicated to the new evangelization. We were also blessed with establishment of a Redemptoris Mater Seminary of the Neocatechumenal Way and our own St. John Vianney Seminary, both of which have born much fruit.

As we approach the 25th anniversary of World Youth Day in Denver, we need to remember the good things the Lord has done, as the Psalmist says, and recommit ourselves to “put out into the deep” to let our nets down for a catch. We must look forward to the future to continue to deepen and implement Christ’s call to all the faithful to not be afraid to encounter him and become his authentic disciples.

DC: You will consecrate the Archdiocese of Denver to the Immaculate Heart of Mary on Oct. 13. Could you explain more about why you are encouraging all parishes and individuals to join you in this act of consecration?

Archbishop Aquila: When Mary appeared to the three poor shepherd children on July 13, 1917, near the town of Fatima, Portugal, she showed them her Immaculate Heart surrounded with thorns that appeared to pierce it. They understood from that encounter that her Immaculate Heart was “offended by the sins of mankind, (and) craving reparation.” We live in a world that has largely dismissed the impact of sin on our relationship with God. In fact, as Pope Benedict XVI observed during his 2008 visit to the U.S., the problem goes even further. We are seeing, he said, a “growing separation of faith from life: (people) living ‘as if God did not exist.’”

This year we are observing the 100th anniversary of Mary’s apparitions at Fatima and her message still rings true. Mary wishes to assist us, through her Immaculate Heart, in bringing the world back to God. This is why I am encouraging people to join me in consecrating themselves, their families, parishes, and the archdiocese to her Immaculate Heart. She has invited us to pray for the conversion of the world, and I hope that through the consecration many more people will begin to consistently pray for this conversion.

DC: You often speak about the importance of praying for and encouraging vocations. Can you explain why this is a priority for you?

Archbishop Aquila: I raise this topic frequently because the Church is working to create a culture of vocations and we have a long way to go. In Denver, we are blessed with a good number of young men and women hearing and answering Christ’s call to the priesthood, religious life and marriage. But we also need to ask, “How many people are not responding to or hearing his call?” I think the growing number of people saying they have no faith answers that question. We need to work to establish a culture within our families that helps young men and women hear God’s voice whispering to them in their hearts, and that encourages them to respond. Jesus has told us in the Gospel to pray to the Harvest Master for more workers in the field. To continually pray for vocations during Eucharistic adoration, while praying the Rosary and in private prayer is a response to this invitation by the Lord and reminds all of us to regularly encourage vocations.