Bringing love to a violent world 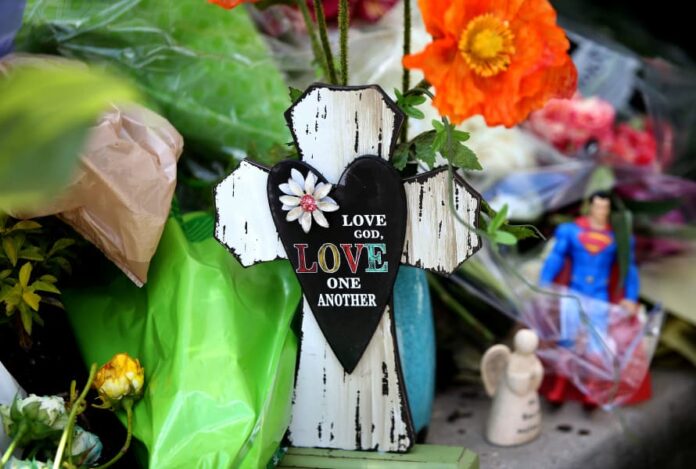 Ferguson. Baton Rouge. Charleston. Dallas. The list of places where violence has occurred in the U.S. within the last year goes on and on.

Right now, people need hope. Each day seems to bring a new headline of a shooting or a killing, and it’s easy to become numb to what is occurring around the community, nation and world on a daily basis.

As Catholics, we are called to promote justice and uphold the dignity of all people. However, with the narratives the media feeds into, knowing how to approach some of these issues through the lens of the Gospel can be difficult.

Still, hope perseveres, be it through prayer or acts of compassion. Cure d’Ars is one example of a local parish that’s relying on the power of faith to spread hope throughout the community. Last summer, they began embarking on prayer walks in the local neighborhoods, and on Aug. 4, they held a prayer vigil for peace and prayed for an end to the violence that has been occurring locally, nationally and internationally.

Skeet Johnson is a cradle Catholic and a longtime parishioner of Cure d’Ars. He is also a former Colorado State public defender of 23 years. Johnson retired from his post as a public defender in 2007, but he’s kept plenty busy. He helped to facilitate the prayer walks last summer along with several other local churches, and he volunteers as a basketball coach at Smith Elementary, working with kids.

As an African American who grew up in the projects of Chicago, Johnson has lived in two different worlds. He has seen racism firsthand, but has always viewed it through the lens of the Gospel.

“There’s a lot of circumstances that exist as a consequence of racism, and those circumstances are beyond the personal kind of racism, but are rooted in the institutions. That can, in some way, answer the question of why black and poor people find themselves very close to the same position they were in historically,” he said. “But, there comes a time when you have to make a decision as to what kind of person you’re going to be, how you’re going to deal with your circumstances.”

Johnson also looks at these issues as a former public defender who dealt with criminals and police on a regular basis. In his career, he saw police officers who were “about protecting themselves to the exclusion of protecting the community,” and he also saw police who “amazed me with the kind of commitment they had.” Johnson recalled one case he handled where he was defending a man who attacked a police officer with a knife.

“Nowadays, you’d be reading about how many bullets entered his body,” he said. “But this one cop did not do that, and he ultimately disarmed the guy. I asked him at the preliminary hearing, ‘man, why didn’t you [shoot] him?’ And he said, ‘Skeet, my job is not to take life, my job is to protect life.’ That attitude is what it ought to be about.”

When speaking about the numerous incidents that have occurred around the nation, he said the point isn’t how numerous or not they are; the point is how it’s breaking down the relationship between the community and the police.

As a Catholic, my challenge is to break away from my fear and to go out and to do that which I can with the tools that I’ve been given.”

“All I can talk about is a mistrust that exists between the police community and the black community,” he said. “What is occurring and how it’s affecting other people, in how it’s breaking down the relationships between the community and the folks who are to protect them — that’s the issue. Although statistically that may be one situation, that’s a situation that’s like a cancer that spreads throughout the body politic.”

Even so, Johnson refuses to let fear stop him from doing what he believes is his God-given duty to love others and make the world a better place.

“As a Catholic, my challenge is to break away from my fear and to go out and to do that which I can with the tools that I’ve been given,” he said.

To protect, serve and love

Lily is a police officer who just began her career working for a Denver Metro police department (For safety reasons, Lily’s last name and the specific police department she works for have been withheld). She is also a practicing Catholic, and one whose faith informs and affects the way she does her job every single day.

“What makes you a good cop is that you do feel things,” she said. “I’ve always felt that one of my strengths I bring is that I am emotional. I feel things a lot deeper than most people do, and I think that’s why God called me to the profession. It’s the human part and the compassion part that makes my job worth it.”

Being a cop has changed the way Lily sees people. She feels compassion for the people in the community she’s serving. There is a large Latino population where she works, and she said that she’s seen firsthand the way in which race can affect the way people are approached or treated. She can also relate to it because she’s a young, white and female officer.

“Seeing how difficult people really have had it gives me so much compassion for them. I can’t condemn people as easily as I once could,” she said. “I can taste it from a minority’s perspective in my job. People do look at you differently and you never know what they truly feel about you. I can see where that might be an issue for someone who is African American or Latino.”

As a member of the law enforcement community and a Catholic, Lily hopes to see the nation heal from the wounds that have been broken open as a result of racial and police violence.

“My goal as a police officer and as a Catholic is to have healing and peace come from this,” she said.

Though racism might not be as prominent in the community she serves as it is in other parts of the country, Lily said that she doesn’t deny that it exists. From her perspective, though, race has nothing to do with the way she does her job, and in her experience with other officers, she said the majority are concerned first and foremost with protecting and serving their community. Lily, however, adds another action to that list: love.