His Church. Our Experience.
Subscribe
HomeLocalBringing hope to Juarez
Local 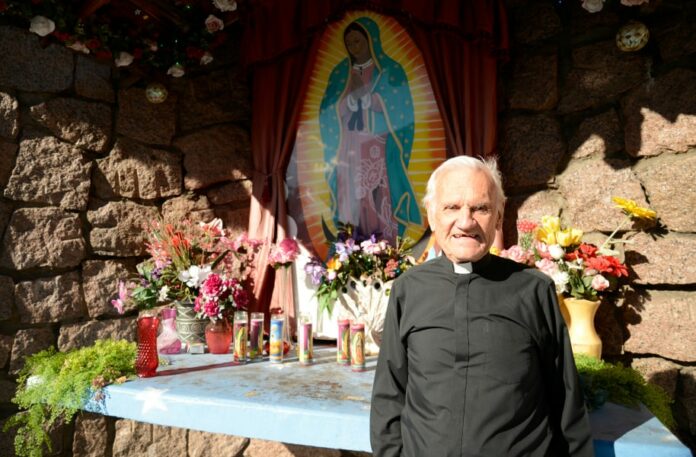 Juarez is a city that needs hope, and Father Peter Urban and Miguel Pro Mission aim to deliver.

Miguel Pro Mission is an organization Father Urban got involved in 20 years ago in an effort to bring hope to the poor in Juarez, Mexico. A big part of what Miguel Pro Mission does is providing scholarships to poor students to help them get a proper education.

Father Urban’s involvement in Miguel Pro Mission began 20 years ago. He met a group of nuns in Juarez called the Tonantzin Sisters who were working to form small group communities in different parts of the city. The met every week to pray, study the Bible, form fellowship and discuss plans for what they could do to better the city of Juarez.

Among those plans was the idea of providing scholarships to students, and 20 years later, they’re still doing it.

Many people in Juarez work in “maquiladoras”, or factories, to support their families, where the average income is $20 a week, or 50 cents an hour. The educational system in Juarez only provides an education through 6th grade, and the unfortunate reality is that many people living there don’t have an education past that because they can’t afford it. This perpetuates a cycle of poverty, one that Father Urban is working diligently to change.

There have been three students who’ve gone on to graduate from the university in Juarez as a result of Miguel Pro Mission’s scholarship program. One of these is Oscar Sandoval, who is now a P.E. teacher at a school.

“One person like that will influence thousands of students for the next 20 or 30 years,” Father Urban said. “What if there were 500? I think it would change the whole city of Juarez.”

This ambitious attitude is what keeps Father Urban involved in Miguel Pro Mission. He’s hoping to one day support up to 500 students at a time, and he’s held several fundraisers over the years to help achieve that goal.

The most recent of these was on July 5, when he hosted world-renowned pianist Richard Steinbach to perform a concert for over 300 people at St. Anthony of Padua Church, where Father Urban lives. They raised over $22,000 to give to Miguel Pro Mission.

Juarez is known for being one of the most dangerous cities in the world, but Father Urban says that the situation has improved. The drug wars have settled down, there aren’t as many corrupt police, and the Mexican government has cracked down on extortionists, threatening to send them to prison for life.

While these are steps towards a better future for Juarez, there is still much work to be done. Father Urban won’t stop until every child in Juarez has the opportunity to get a full education.

“Not only will these students get a job, it’s a matter of extracting yourself from misery,” he said. “It’s misery to make $20 a week. A step above that is a dignified life of poverty, almost like the poverty of Jesus.”

By donating $25 each month, you can contribute to the mission of Miguel Pro Mission. Visit miguelpromission.com to learn more.