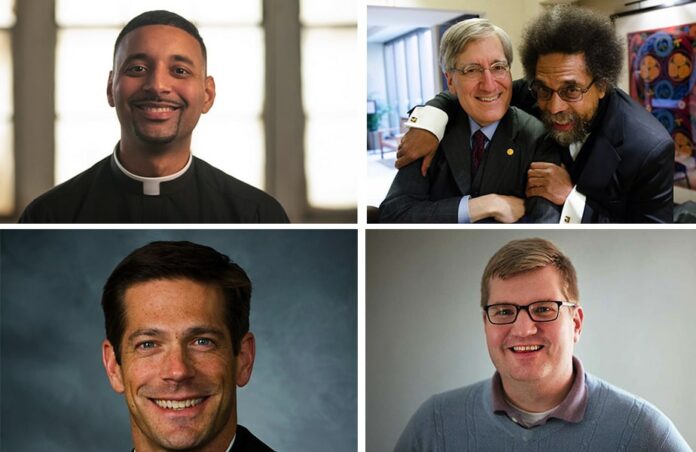 Over the next few months, St. Thomas Aquinas Parish in Boulder is hosting a stacked speaker series that’s sure to be as intellectually stimulating as it is informative and useful in navigating some of today’s most contentious issues.

The Aquinas Institute for Catholic Thought is the intellectual formation arm of the St. Thomas Aquinas Catholic Center at the University of Colorado in Boulder. Each year, they host a variety of speakers and debates which address some of the hot topics of the times from a Catholic perspective. This year, due to COVID restrictions, these events cannot be held in-person, so the AICT is going the virtual route instead.

Instead of the usual lecture format the speaker series utilizes, Dr. Scott Powell, director of the Aquinas Institute for Catholic Thought, will be engaging in livestreamed conversations with the speakers, the first of which was Sept. 22 with Father Josh Johnson, Vocations Director for the Diocese of Baton Rouge, La. and author of Broken and Blessed, who discussed “Loving Well Across the Racial Divide.” The conversation format, Powell said, is both “easier to listen to,” and also reflects the goal of the speaker series, which is to show that it is possible to engage in conversations about contentious issues in a loving and civil way.

“There is an underlying theme that kind of runs through[the talks],” Powell explained. “The point to make is that a lot of folks aren’t actually having conversations about these things. We’re hearing soundbites. We’re hearing people yelling at each other. We’re seeing things being thrown at us and spit at us and yelled at us by the media, but we’re not seeing the experience of sitting down and talking through things.

On Oct. 19. Dr. Powell had a conversation with Father Mike Schmitz about “Building Community in a Time of COVID.” Father Schmitz is the director of youth and young adult ministries in the Diocese of Duluth, Minn., and is best known for his YouTube videos in which he answers theological and moral questions.

This Thursday, November 19, Dr. Powell will host a conversation with J.D. Flynn, editor-in-chief of Catholic News Agency, on the topic of “Fake News and Spiritual Exhaustion.”

Finally, on Jan. 25, 2021, Dr. Powell will speak with Professor Robert George of Princeton University and Professor Cornell West of Harvard University and ask the question: “Is Civil Discourse Dead?” Professors George and Cornell are at two different ends of the ideological spectrum, yet their friendship and ability to engage in discourse is well known among the scholarly community.

“The climax, of course, is the one with Robert George and Cornell West in January; two men who have a deep, deep love for each other and a deep friendship with each other, but who disagree pretty intensely, politically and societally and about all sorts of other things,” said Powell. “Theirs is a demonstration of how we can actually disagree with each other in love.”

The talks start at 7 p.m. mountain time and can be viewed on YouTube or at thomascenter.org/aict.