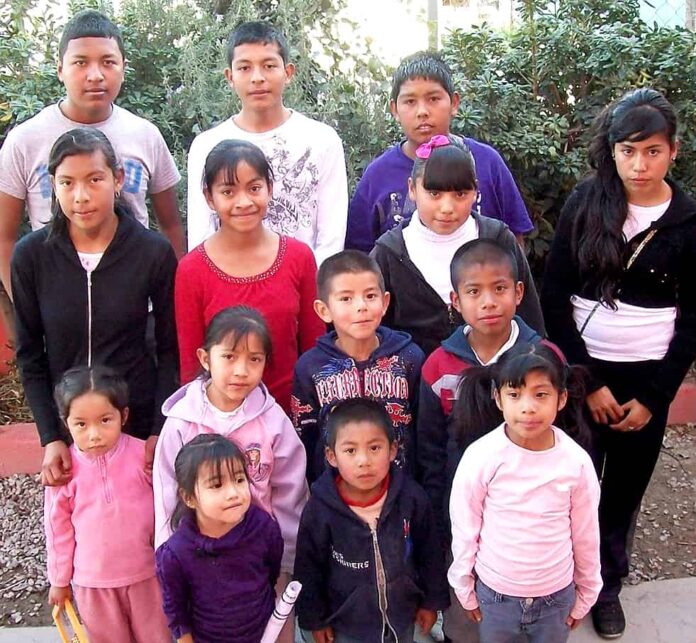 Long before migrant caravans and controversial Trump administration immigration policies began dominating headlines last year, a Catholic mission in Ciudad Juarez, Mexico, led by a humble Denver priest, was tirelessly working to prevent the forced migration of the young poor who Pope Francis said “are persecuted and threatened when they try to flee the spiral of violence and the hell of drugs” prevalent in their impoverished communities.

Inspired by the work of others, Father Peter Urban, 89, founded Miguel Pro Mission in 2010. The Colorado nonprofit offers scholarships and tutoring to children in Juarez to help them attend school from kindergarten through college. Recently, the mission also began building eco-friendly, energy efficient homes for the poor.

While an education makes a brighter future possible, the homebuilding and repair assistance provides safe, dignified dwellings. Both efforts foster hope, which is the mission’s goal, Father Urban said.

“Five of our students have graduated from college,” he told the Denver Catholic. “Seventeen are enrolled at a university. More than 30 are in middle school and high school.”

The scholarships are vital, Father Urban said, as free education in Mexico only goes through the sixth grade.

“Then they are out and may be tempted to listen to narcos and sell drugs to make a living,” he said.

The youths are also vulnerable to other criminal activities. Some try to flee the wretched poverty and violence of their city by seeking a better life across the border.

Once considered the most dangerous city outside a war zone, the homicide rate in Juarez began dropping in 2012 but last year reported “1,247 homicides, a number comparable to the most violent era for the city from 2008 to 2011,” according to El Diario de Juarez. The increase, the newspaper said, is attributed to cartels fighting for control of the city’s lucrative drug-smuggling routes.

Physical education teacher Oscar Sandoval was able to earn his college degree thanks to Miguel Pro Mission scholarships. Today, he teaches at two schools in Juarez and, with a promising future, recently married.

“He got married in the Catholic Church because of his background,” Father Urban said, referring to Sandoval’s experience with the mission, which nurtured him both academically and spiritually. “Now he can impart knowledge not only about physical health, but also his faith.”

A heavily industrialized city boasting some 300 factories, nearly a third of Juarez’s population is comprised of people who relocated from elsewhere, primarily from other parts of Mexico, but also from other Central American countries.

“They hear there is work,” Father Urban said. “They come and find rocks, cardboard and some kind of roofing and put it together to house their family. They work long hours at maquiladoras, factories, for 20 to 40 dollars a week. That’s not poverty — that’s misery.”

Last year, the mission built a home for a woman raising her three children and battling cancer after being abandoned by her husband. In 2017, the mission helped complete a residence and chapel for the Tonantzin Sisters, consecrated women who partner with the mission and staff four community centers around Juarez where they offer child care to working parents, provide tutoring to children, and offer catechesis and counseling to families.

Deacon Paul Zajac, who serves on the Miguel Pro Mission board of directors and ministers at St. Anthony of Padua Parish in Denver where Father Urban resides, helped build the residences.

“It was a good experience,” Deacon Zajac said. “Miguel Pro Mission’s focus is to help those most in need in a manner that helps them the most. It lives out the Gospel precept that when you care for your neighbor you care for Christ.”

Not only does the mission uplift people by helping them to acquire an education and a proper dwelling, the deacon said, but it involves them in those efforts and gives witness that God loves them.

“It helps them to know that God created them with a mission and a purpose,” Deacon Zajac said. “It tells them God cares so much that he sent people who live 800 miles away to help them.

“The people have such a sense of gratitude. It was important to them to share with us what they had in return. It was like being with the community of the early Church.”

In addition to helping residents build energy efficient adobe homes that include dry ecological toilets, which turn waste into fertilizer (a lack of water and sandy soil are issues in Juarez), the mission encourages the people to become self-sufficient by growing a garden for vegetables, and raising chickens and perhaps a goat for eggs and milk.

“If you have that, you may be poor but you have a dignified poverty,” Father Urban said, likening it to what Christ described when he said, “Blessed are the poor.”

Father Urban got involved with the poor in Juarez in 1994 through Father Stan Martinka, a former U.S. Army chaplain who knew the Tonantzin Sisters and had started an apostolate 10 years prior to help them build community centers and provide financial aid to families to keep their children in school. Later, Deacon Michael Howard assisted their work with a house-building effort.

Both Father Martinka and Deacon Howard died in 2011. Father Urban credits the two men and the Tonantzin Sisters with inspiring Miguel Pro Mission, which he established with the help of his friend Dan Schell after some 16 years supporting the ministry both on site in Juarez and from afar in Denver.

Today, even as the mission explores adding new technology to teach children English at a younger age via educational computer games to aid fluency and enhance their ability to get better paying jobs, the idea is rooted in its foundational goal: to instill hope for a better future.

“We like to do education more than anything,” Father Urban said. “We plan to build two more homes this year and many, many more over the next 20 years. But our main focus is education.”

Additionally, organizers are planning a grand event to celebrate Father Urban’s 90th birthday and benefit the mission in August, said Mary Ann Hand, secretary of the mission’s board of directors.

“We’re excited about the work going on,” she said, “and the good things happening through the mission.”

“It gives people a dignified life,” said Deacon Zajac. “And they can see a greater future.”