Blessed Michael McGivney: A light in the depth of the mines 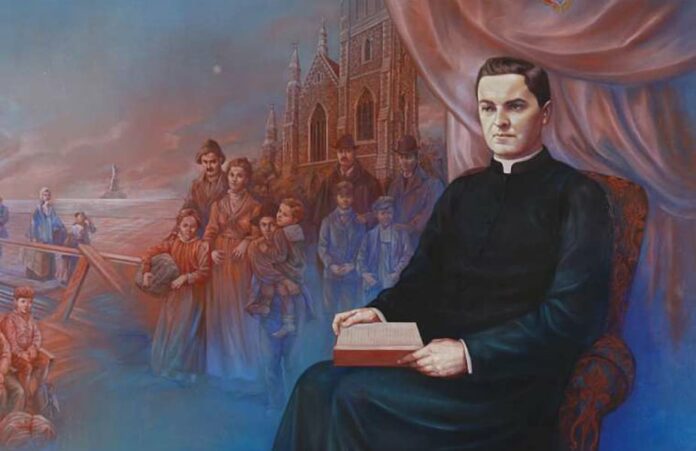 In the late 1800s, it became common for many Catholic working men of different ages to dust off their dirty clothes after a hard day’s work at the mines or railroads and attend something more than a meeting – a brotherhood that had brought hope in their suffering, acceptance in rejection, and unity amid division.

While few could get a glimpse of the hidden desires of the Irish and immigrant families that came to America in the 19th century, a young holy priest from a small town in Connecticut saw them clearly and responded heroically. His name: Father Michael McGivney; his response: The Knights of Columbus.

The son of Irish immigrants, whose beatification took place Oct. 31, is considered by many a model priest with a penetrating vision and a burning desire to lead his flock to holiness, a view that anticipated the Second Vatican Council by nearly a century. The Knights of Columbus began as a small idea for his parishioners, but it quickly spread across the nation. Nearly a century and half later, its impact around the world and in our very own state of Colorado cannot be overlooked.

“Father McGivney’s vision is still transforming people’s lives throughout the world… His vision in 1882 has expanded immensely, and today there’s more than two million men who belong to this organization around the world,” said Christopher Foley, Colorado State Deputy of the Knights of Columbus. “It’s kind of amazing to think about the fast growth [of the organization]. Originally Father McGivney had intended this program for his parish, but quickly other priests recognized the value of what he had created, and other councils started growing outside of the Connecticut area, [arriving in] Colorado in 1900.”

To understand the Knights of Columbus and their founder, one must grasp the context and lives of Catholic immigrants of the time.

“The social setting in Connecticut when he was growing up was outright hostile toward Catholics,” Foley said.

Catholic immigrants were at the very bottom of the social ladder and faced constant discrimination for their lack of education, poverty and for the stigma of holding greater allegiance to the Pope than to the president. In people’s eyes, they couldn’t be both Catholic and American.

Growing up in this environment and being the first of 13 children, McGivney left for seminary at the age of 16, but his father’s death would soon force him to return home to provide for his family. The time he spent working, however, left a deep mark in the young man that would later bear its fruit in his priestly ministry.

“The experiences of being part of a big family and his work set him up to be a very compassionate and understanding man. They prepared him with a unique perspective that helped his priesthood,” Foley assured. “He knew the diversity of personalities and the demands on people’s time as they tried to achieve their goals.”

From his first years as a priest, Father McGivney sought to make the church the center of community life for families. He organized outings for youth and baseball games. He also visited the imprisoned and was beloved by the guards.

Such close contact with his parishioners helped him better understand the constant challenges they faced daily.

One such difficulty came when the man of the family, who was often the sole provider, died, a common occurrence due to the nature of immigrants’ hard manual work. The family would lose everything, and unless the widow could prove that she had enough financial resources, the state would take her children and place them in institutional homes. Care for widows would thus become an essential part of the Knights of Columbus.

Yet Father McGivney’s idea of founding a community of lay brothers had a lot to do with the popularity of numerous secret societies that were mainly anti-Catholic and would lure men from the faith.

“Young and middle-aged Catholics were also looking for societies to belong to that gave them a common brotherhood,” Foley said. “Father McGivney built an organization that had the fraternal aspect, but without the discrimination and secrecy common in other societies.”

When the young priest founded the Knights of Columbus in 1882, he envisioned a brotherhood that would lead its members to Christ and help them provide for their families spiritually and materially. He wanted to keep families Catholic.

As explained in the documentary “Father McGivney: An American Blessed,” the organization “was named for Columbus, the most celebrated Catholic figure at the time, and one whose name would help make the case that Catholics could be good American citizens as well.”

Father McGivney’s journey would end at the early age of 38, after a serious case of pneumonia during the pandemic of 1889 and 1890, but his legacy would endure, and the order would arrive in Colorado 18 years after its foundation.

Founded in 1900, the Denver Council 539 is the oldest council in the western part of the country. Thanks to the fervent Knight John H. Reddin, the order quickly spread to Pueblo, Colorado Springs and to the Rockies, reaching Grand Junction, and then north to Fort Collins.

“I couldn’t say what exactly led him to some of those places in Colorado, but I’m sure there were priests seeking him out wanting something to get their men active again in the Church and have an organization that was available to take care of survivors,” Foley said.

Currently there are 150 active units in various parishes across the state. Just in 2019, the Colorado Knights raised and donated $2.2 million to charitable organizations and causes and volunteered a total of 725,000 hours of service to communities and Church activities.

Caring for people at all stages of life, the Knights of Columbus have worked hard to defend the sanctity of life. They’ve been involved in numerous pro-life efforts and have provided 30 ultrasounds to different clinics to respect life before birth. For years, they have helped the elderly and families in difficult situations by providing food and winter coats.

“When we go out and do these things, we’re serving the people, regardless of their nationality or religion or ethnicity – we’re doing it because that’s what God wants us to do,” Foley said.

Pope Benedict XIV considered Father McGivney “a key figure in ‘the impressive growth of the Church in the United States.’”

“I think people should know that Father McGivney has had a global impact. He was years ahead of his time in his thinking on how to satisfy the need that he saw in young men,” Foley concluded. “He gave to men, so that men could give back to others and to the Church.”