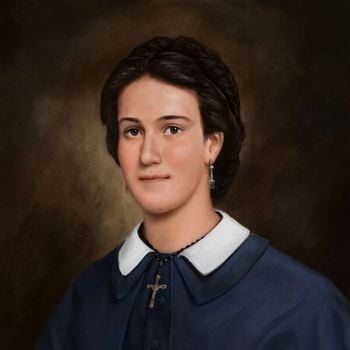 Born in 1813 to a multicultural and multiracial family, Henriette Delille grew up in a complicated environment. Groomed by her mother to join the society of the day, Delille was taught nursing and homemaking skills; she learned French, music, and dance, and attended various balls and events, all in the hopes of finding a suitable partner – a white man.

At the time, this partner would have been a common-law husband who entered into a contract with his female partner’s mother, pledging support and education for their children. Once the men were more established financially, they would often leave their common-law wives for a white, American woman.

Deeply devoted to the teachings of the Church, Delille was outspoken in her rejection of the practice, seeing it as a violation of the sanctity of matrimony. She rejected the life her mother desired for her and grew closer and closer to the Lord instead.

Delille began teaching at a local Catholic school and over time, found her devotion to the poor increasing, much to her mother’s chagrin.

The African American sisters would care for and educate the poor, sick, and elderly. The sisters gained notoriety for their care of victims of the yellow fever epidemics in 1853 and 1897. Their charitable work only expanded over the decades, even following Delille’s death in 1862.

As remarkable as their charity is, it should be noted that their works were performed in the face of great prejudice, racism, and opposition from the Delille family as well as local clergy and bishops. The sisters were forbidden from wearing habits or taking public vows because of their race; Delille’s family distanced themselves from her and her work.

Yet, even still, Mother Henriette persevered in her service to those most in need and inspired scores to join her in these charitable efforts. So inspirational was she that the City of New Orleans named a street after her in 2011!

Venerable Henriette Delille, pray for us!

André Escaleira, Jr.
André Escaleira is the Digital Media Specialist for the Archdiocese of Denver. Originally from Connecticut, André moved to Denver in 2018 to work as a missionary with Christ in the City, where he served for two years.
RELATED ARTICLES
Eucharist