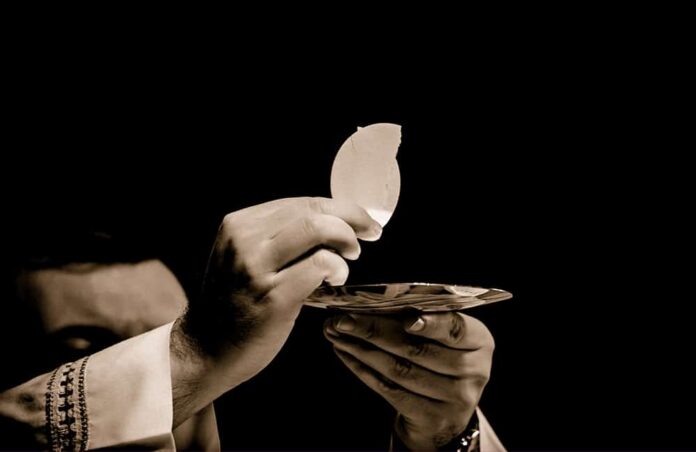 As the United States Conference of Catholic Bishops prepares to meet in Baltimore, misconceptions about a proposed conference statement on the Eucharistic vitality and integrity of the Church in America abound. The confusions originating from online Catholic sources and social media have been exacerbated by a mainstream press that has consistently misrepresented what the bishops are doing. I hope the following clarifications are useful.

The proposed statement is not primarily about politicians. The Catholic Church is a eucharistic Church; as St. John Paul II wrote in his last encyclical, “The Church draws her life from the Eucharist.” When Catholic faith in the mystery of the Eucharist — Christ’s real presence among us — flags, the Church withers. When eucharistic practice declines, the Church suffers from a wasting disease. Eroding eucharistic faith and lax eucharistic practice have been features of U.S. Catholic life for decades. The bishops were determined to address this “eucharistic deficit” before COVID-19 accelerated a decline in Mass attendance, before Mr. Biden was a declared presidential candidate, and before Mrs. Pelosi redefined the killing of the unborn as “reproductive health care.”

Anything the bishops say about the ecclesiastical and personal circumstances of Catholic public officials whose actions deny essential, definitively-taught truths of Catholic faith will be said in the larger context of the bishops’ eagerness to reignite eucharistic vitality and reverence throughout the Church. Revitalizing a eucharistic Church, however, requires a new clarity among the people of the Church about the nature of the eucharistic community — and what actions estrange Catholics from it.

The bishops never intended to issue a statement “denying” holy communion to President Biden. The media mantra that “some conservative bishops” want to “deny” holy communion to President Biden has been repeated so frequently that it may seem true. It is not, and it never has been. The blunt fact of the matter is that Canon 1405 of the Code of Canon Law reserves the right to impose ecclesiastical penalties on heads of state to the pope. But that does not end the matter: not at all.

The issue of worthiness to receive holy communion is not confined to the question of whether or not someone is in a state of mortal sin. It is hardly news that the notion of grave sin is seriously attenuated in 21st-century Catholicism. And it is certainly true that, if one is conscious of being in a state of grave sin, one should seek reconciliation with God and the Church through the sacrament of Penance before receiving holy communion; this is bedrock Catholicism, rooted in 1 Corinthians 11:27-29: “Whoever…eats the bread and drinks the cup of the Lord in an unworthy manner will be guilty of profaning the body and blood of the Lord….[and] eats and drinks judgment upon himself.” But ignorance or incapacities in intellectual and moral judgment can make it difficult for such impaired people to commit mortal sin. So the question of worthiness to receive holy communion ought not be framed solely in terms of mortal sin.

Moreover, that is not the issue with Catholic public officials whose actions willfully advance the culture of death. No one knows whether these men and women are in a state of mortal sin. What we do know, and what we cannot avoid knowing, is that these men and women have declared, by their public actions, that they are not in full communion with the Catholic Church. That is why, for the sake of their own integrity, they should not present themselves to receive holy communion. If they stubbornly persist in doing so, even after appropriate instruction and counsel, then the Church’s pastors should instruct them not to act at Mass as if they were in full communion with the Church.

Recent events in Rome change nothing. Irrespective of what Pope Francis did or did not say on October 29 to President Biden — who has been known to get things, er, wrong before — the fundamental issue before the bishops remains the eucharistic vitality of the Church in the United States. Reanimating a eucharistically vibrant Catholicism will take years of effective catechesis and preaching, and those efforts cannot start soon enough. Eucharistic revitalization will be seriously impeded, however, if the bishops do not forthrightly address the reception of holy communion by those who are not in full communion with the Church — and call these estranged Catholics to repentance and a deeper conversion to the Lord, which will permit them to receive holy communion in integrity as reconciled members of the Body of Christ.